The Lie We Live 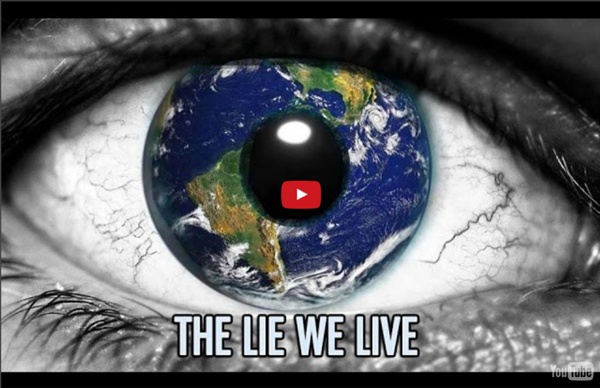 The Silver Bear Cafe Will Globalists Trigger Yet Another World War? Giordano Bruno World War III is the most iconic event in American culture that never happened. uk.businessinsider AP PhotoMahatma Gandhi (left) and Adolf Hitler. Mohandas Gandhi, frequently known by the honorific Mahatma — meaning "great soul" — was famous for advocating civil disobedience and nonviolence to achieve his goals. Starting in 1921, Gandhi led the Indian independence movement through such methods, finally achieving freedom from the British empire in 1947, just six months before his death.

Pineal Gland - Our Third Eye: The Biggest Cover-Up in Human History Mystic Banana Waking Times The pineal gland (also called the pineal body, epiphysis cerebri, epiphysis or the “third eye”) is a small endocrine gland in the vertebrate brain. It produces the serotonin derivative melatonin, a hormone that affects the modulation of wake/sleep patterns and seasonal functions. Its shape resembles a tiny pine cone (hence its name), and it is located near the center of the brain, between the two hemispheres, tucked in a groove where the two rounded thalamic bodies join. How Popular Music's Lyrics Perpetuate American Idiocy Claire Bernish (ANTIMEDIA) A recent study served to confirm the patently obvious: song lyrics for the most popular genres of music are ridiculously obtuse — and getting worse over time. Though this might not be a revelation, the figures are distressing indicators of both an intellectually vapid societal and cultural future as well as its apparent inevitability.

The Economic End Game Explained Throughout history, in most cases of economic collapse the societies in question believed they were financially invincible just before their disastrous fall. Rarely does anyone see the edge of the cliff or even the bottom of the abyss before it has swallowed a nation whole. This lack of foresight, however, is not entirely the fault of the public. It is, rather, a consequence caused by the manipulation of the fundamental information available to the public by governments and social gatekeepers. 9,000-Year-Old Remains Show Evidence Of Oldest Known Decapitation In The Americas What do Henry VIII, George R.R. Martin, the Red Queen, and people who lived in South America 9,000 years ago all have in common? Big fans of decapitation. For history buffs and literature lovers, those first three are no surprise, but the discovery of a decapitated head in a South American grave was a bit of a shock, mostly due to its extreme age. In a study published today in PLOS One, researchers announced the discovery of the oldest known decapitation in the Americas. Found in the lowlands of Brazil at a site called Lapa do Santo, the body belonged to someone who lived more than 9,000 years ago.

Stanford Scientists Observe Man Travel Out of His Body and Into Space – What He Saw Was Remarkable NASA’s Pioneer 10 spacecraft was launched into space in 1972. It was the the very first spacecraft to fly directly through the asteroid belt and make observations of the biggest planet in our solar system, Jupiter. It was also able to obtain closeup images of the planet, something that scientists had never had access to before. (1) Forget Facebook, Abandon Instagram, Move To A Village By Diane Cole / npr.org In the parts of the world that we cover in our blog, many people live in villages. Villages have their problems, to be sure. Isis has enough weapons to carry on fighting for two years, UN warns A new report prepared for the United Nations Security Council warns that the militant group known as the Islamic State (Isis) possesses sufficient reserves of small arms, ammunition and vehicles to wage its war for Syria and Iraq for up to two years. The size and breadth of the Isis arsenal provides the group with durable mobility, range and a limited defense against low-flying aircraft. Even if the US-led bombing campaign continues to destroy the group’s vehicles and heavier weapons, the UN report states, it “cannot mitigate the effect of the significant volume of light weapons” Isis possesses. Those weapons “are sufficient to allow [Isis] to continue fighting at current levels for six months to two years”, the UN report finds, making Isis not only the world’s best-funded terrorist group but among its best armed. Isis, along with its former rival turned occasional tactical ally the Nusra Front, are sufficiently armed to threaten the region “even without territory”, the report concludes.

Has America Been Set Up As History's Ultimate Bumbling Villain? The high priests of academic and “official” history love a good villain for two reasons: First, because good official villains make the struggles and accomplishments of good official heroes even more awe-inspiring. And, second, because nothing teaches (or propagandizes) the masses more thoroughly than the social or political lessons inherent in the documented rise and fall of the world's most despicable inhabitants. We get shivers of fear and excitement when we discuss the evils and the follies of ancient monsters like Nero, Attila the Hun, Caligula, etc, or more modern monsters, like Mussolini, Stalin, Hitler, Goebbels, Mao, Pol Pot, Idi Amin, and so on. We take solace in the idea that “we are nothing like them”, and our nation has “moved beyond” such animalistic behavior. But even more fascinating popcorn-style history is found not in the destruction of tyrants, but the destruction of empires.

Court Rules Living ‘Off The Grid’ Is Illegal Source: www.countercurrentnews.com | Original Post Date: June 1, 2015 – For many it’s a life-long dream to get “off the grid” and live self-sufficiently, but unplugging from municipal services has been ruled illegal by a court in Cape Coral, Florida. Special Magistrate Harold S. Eskin ruled that Robin Speronis is not allowed to live on her own private property without being hooked up to the city’s water system. He admitted that she had the right to live without utility power, but said that her alternative power sources must always first be approved by the city. Cancer Bursting Nanobubbles Prove Effectiveness in Preclinical Trials Two years ago, researchers at Rice University, led by Dmitri Lapotko, a physicist and biochemist, developed a novel method for killing cancer cells. The technique relies on gold nanoparticles infiltrating cancerous cells. When a laser is shone on those cells, tiny bubbles surround them and explode, thereby ripping the cancerous cells apart. If the bursting bubbles don't completely destroy the cancer cell, the weakened state it's left in by the explosions makes it more susceptible to chemotherapy drugs. Now Lapotko and his colleagues are reporting the results of pre-clinical trials using the technique, dubbed “quadrapeutics.” The term stems from the use of four tools in the destruction of the cancer cells: gold nanoparticles, laser pulse, x-ray, and a drug.

Why Do People Defend Unjust, Inept, and Corrupt Systems? By Science Daily / sciencedaily.com Why do we stick up for a system or institution we live in -- a government, company, or marriage -- even when anyone else can see it is failing miserably? Why do we resist change even when the system is corrupt or unjust? A new article in Current Directions in Psychological Science, a journal published by the Association for Psychological Science, illuminates the conditions under which we're motivated to defend the status quo -- a process called "system justification." System justification isn't the same as acquiescence, explains Aaron C. Kay, a psychologist at Duke University's Fuqua School of Business and the Department of Psychology & Neuroscience, who co-authored the paper with University of Waterloo graduate student Justin Friesen.