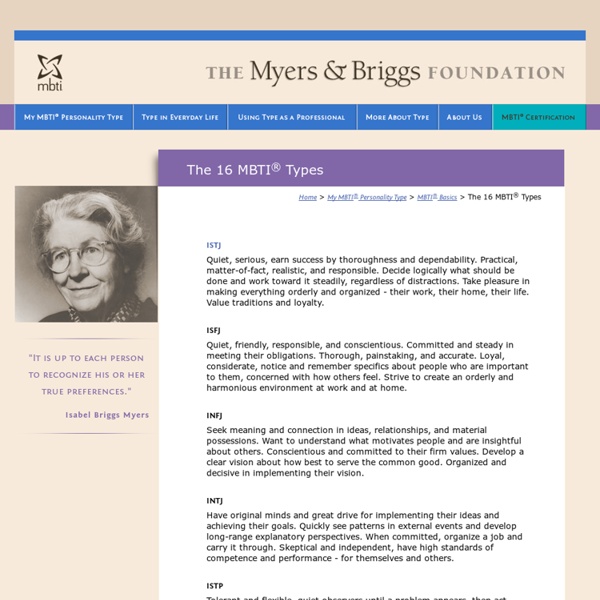 Quiet, serious, earn success by thoroughness and dependability. Practical, matter-of-fact, realistic, and responsible. Decide logically what should be done and work toward it steadily, regardless of distractions. Take pleasure in making everything orderly and organized - their work, their home, their life. Value traditions and loyalty. Quiet, friendly, responsible, and conscientious. Seek meaning and connection in ideas, relationships, and material possessions. Have original minds and great drive for implementing their ideas and achieving their goals. Tolerant and flexible, quiet observers until a problem appears, then act quickly to find workable solutions. Quiet, friendly, sensitive, and kind. Idealistic, loyal to their values and to people who are important to them. Seek to develop logical explanations for everything that interests them. Flexible and tolerant, they take a pragmatic approach focused on immediate results. Outgoing, friendly, and accepting.

Ben Franklin effect The Ben Franklin effect is a psychological finding: A person who has done someone a favor is more likely to do that person another favor than they would be if they had received a favor from that person. Similarly, one who harms another is more willing to harm them again than the victim is to retaliate.[1] Recognition of effect by Franklin[edit] In the words of Benjamin Franklin, who famously observed the effect and for whom it is named, "He that has once done you a kindness will be more ready to do you another, than he whom you yourself have obliged

10 Practical Uses For Psychological Research in Everyday Life People love to give each other advice. The web is full to bursting with all types of pseudo-psychological advice about life. The problem is, how much of this is based on real scientific evidence? Decision Points Explanations > Decisions > Decision Points Description | Discussion | So what Description Across any single activity or a set of related activities, there may be points at which decisions have to be made. These are decision points. Unless there are clear decision points, people often will continue with the momentum of the current activity.

How to Read Someone’s Mind Reading someone's mind Reading someone’s mind through telepathy has a long and legendary history. But if you want to have this ability too, you may have to rethink what mind reading is. 10 Brilliant Social Psychology Studies Ten of the most influential social psychology experiments. “I have been primarily interested in how and why ordinary people do unusual things, things that seem alien to their natures.Why do good people sometimes act evil?Why do smart people sometimes do dumb or irrational things?” –Philip Zimbardo

How to tell in 15 minutes whether someone likes you - by Bridget Webber Bridget Webber's image for: "Body Language that Shows when someone of the Opposite Sex Fancies you" Caption: Location: Image by: Wouldn't it be great to be able to tell within fifteen minutes whether someone likes you or not? Ten Virtues for the Modern Age The Virtues Project comes as a response to the wave of discussion and feedback that followed the publication of my book, Religion for Atheists, and a growing sense that being virtuous has become a strange and depressing notion, while wickedness and evil bask in a peculiar kind of glamour. My ultimate aim for the project is that it ignites a vital conversation around moral character to increase public interest in becoming more virtuous and connected as a society. In the modern world, the idea of trying to be a ‘good person’ conjures up all sorts of negative associations: of piety, solemnity, bloodlessness and sexual renunciation, as if goodness were something one would try to embrace only when other more difficult but more fulfilling avenues had been exhausted. Throughout history, societies have been interested in fostering virtues, in training us to be more virtuous, but we're one of the first generations to have zero public interest in this. 1.

many of whom take a moral high ground 2009 may well be remembered for its scandal-ridden headlines, from admissions of extramarital affairs by governors and senators, to corporate executives flying private jets while cutting employee benefits, and most recently, to a mysterious early morning car crash in Florida. The past year has been marked by a series of moral transgressions by powerful figures in political, business and celebrity circles. New research from the Kellogg School of Management at Northwestern University explores why powerful people - many of whom take a moral high ground - don't practice what they preach. Researchers sought to determine whether power inspires hypocrisy, the tendency to hold high standards for others while performing morally suspect behaviors oneself. The research finds that power makes people stricter in moral judgment of others - while being less strict of their own behavior.

The Myers-Briggs (mother and daughter) system of classifying people is a form of discrimination. It is no different from the prejudice that forms around a label that "Piceans are all Dreamers". Even Jung waned about implementing such a system in the Preface of Volume 6 of his Collective Works: where he introduced the notion of Introvert and Extrovert (and the other binary concepts that Myers capitalised on). Surely you know by now that Reality does not work on "either or" but rather on "both and". by pauljacobson Jan 20

Related:
Related:  Graphic styles   -  Learning Styles   -  LEARNING STYLES   -  Learning Styles   -  Glamorous Styles for Women over 40 this Spring   -  Home | Belbin   -  Index of Learning Styles   -  Learning Styles Don't Exist - YouTube   -  Myers Briggs Test | MBTI Personality Types   -  Cliches: Avoid Them Like the Plague   -  Personality test based on C. Jung and I. Briggs Myers type theory   -  Vintage PinUp Hair Tutorial for Victory Rolls and Updo 1940s - YouTube   -  Film-Philosophy Submissions   -  What Instructional Designers Do: Is this a career for you?   -  Results-Only Work Environment (ROWE) | CultureRx   -  K-12   -  How Technology Can Improve Learner-Centered Teaching - Faculty Focus | Higher Ed Teaching & Learning   -  How Can I Make Sure My Resume Gets Past Resume Robots and into a Human's Hand?   -  30+ Simple Resume Design Ideas that work   -  How to cultivate a personal learning network   -  johari window model - helpful for personal awareness and group relationships   -  The Beauty Department: Your Daily Dose of Pretty. - PRIM + PROPER   -  The Beauty Department: Your Daily Dose of Pretty. - CHALK IT UP   -  Career Cruising   -  46 Ways To Start A Business With No Money - Brian Armstrong   -  BigFuture | Find the Best College for You   -  Forbes Welcome   -  FYC2.pdf   -  Minerva Project   -  Welcome Page   -  How To Redesign Your Resume For A Recruiter’s 6-Second Attention Span | Co.Design | business + design   -  National College for Teaching and Leadership   -  6 Leadership Styles, And When You Should Use Them   -  Welcome To Achieve | Achieve   -  Sample Questions | PARCC   -  Teacher Loan Forgiveness | Federal Student Aid   -  Coursera.org   -  jobdreaming - Broadcast your job openings, get alerted of matching candidates