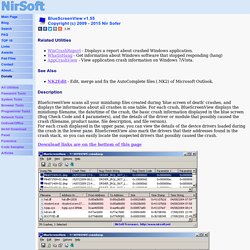 WhatIsHang - Get information about Windows software that stopped responding (hang) AppCrashView - View application crash information on Windows 7/Vista. See Also NK2Edit - Edit, merge and fix the AutoComplete files (.NK2) of Microsoft Outlook. Description BlueScreenView scans all your minidump files created during 'blue screen of death' crashes, and displays the information about all crashes in one table. Download links are on the bottom of this page Versions History. Windows 8.1 Error: Live Tiles Not Working, Apps Showing Down Arrow Icons. A number of users are reporting issues with the Start screen live tiles after moving to Windows 8.1, as all seem to be just static and do not show real-time information. 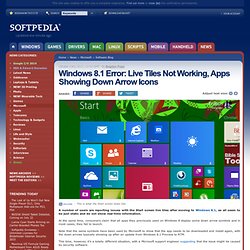 At the same time, consumers claim that all apps they previously used on Windows 8 display some down arrow symbols and in most cases, they fail to launch. Note that the same symbols have been used by Microsoft to show that the app needs to be downloaded and install again, with the down arrows typically showing up after an update from Windows 8.1 Preview to RTM. This time, however, it’s a totally different situation, with a Microsoft support engineer suggesting that the issue might be caused by security software. At this point, there is no available workaround, but users should try downloading and installing the available apps once again, especially if they switched from Windows 8.1 Preview to RTM. 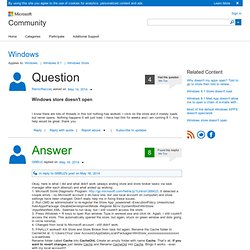 First, try running The Microsoft Account Troubleshooter and check if it helps: I would like to let you know about basic information before running any app: User Account Control settings must be enabled.Note: User Account Control (UAC) notifies you before changes are made to your PC that requires administrator-level permission. By default, UAC is set to notify you whenever apps try to make changes to your PC, but you can change how often UAC notifies you.To snap apps, you need a screen resolution of at least 1366 x 768.Requires Microsoft Account. Since you mentioned you are able to open Windows Store in another user account. If you have another administrator account that is not affected, then sign out of the affected account, and sign in to the other administrator account.

Solved Win8 taking up too much drive space. How To Clean Install Windows 8 or 8.1 [Walkthrough] HTG Explains: Microsoft Accounts vs. Local Accounts in Windows 8. Windows 8 is more integrated with Microsoft’s services than ever. 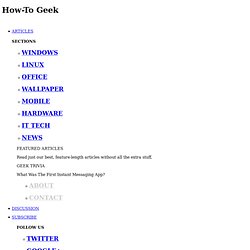 When you create a user account on your computer, you’ll be prompted to use a Microsoft account. Microsoft accounts are different from local user accounts, which are still available. How to change Windows-8 and Win 8.1 Computer Name, Workgroup and Domain settings? Connect a Microsoft Account to a Domain account in Windows 8.1? How to Join Windows 8 to a Domain - Preparing to Join a Domain. Windows 8.1 Update ISOs now available on Microsoft TechNet and MSDN. While early builds of Windows 8.1 Update have been leaked on the Internet for the past few months, today Microsoft officially released the ISO files for its major new upgrade to its latest PC OS for its TechNet and MSDN subscribers. 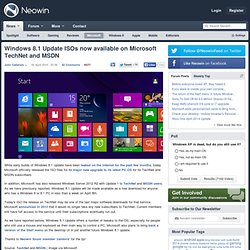 In addition, Microsoft has also released Windows Server 2012 R2 with Update 1 to TechNet and MSDN users. As we have previously reported, Windows 8.1 Update will be made available as a free download for anyone who has a Windows 8 or 8.1 PC in less than a week on April 8th. Today's ISO file release on TechNet may be one of the last major software downloads for that service. Microsoft announced in 2013 that it would no longer take any new subscribers to TechNet. Current members still have full access to the service until their subscriptions eventually run out. 8.1 Update: The IT Pro Perspective. Update – April 10th 2014 – Post edited to provide more detail of Windows 8.1 Update installation timing. 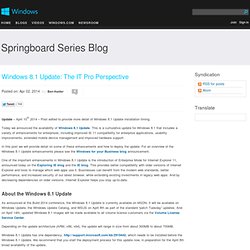 Today we announced the availability of Windows 8.1 Update. This is a cumulative update for Windows 8.1 that includes a variety of enhancements for enterprises, including improved IE 11 compatibility for enterprise applications, usability improvements, extended mobile device management and improved hardware support. In this post we will provide detail on some of these enhancements and how to deploy the update.

Windows 8.1 RTM Now Available for Download. Windows 8.1 - What's New, IT Pro Features, Devices, UI. We built Windows 8 to bring a modern computing experience to businesses and to help professionals stay connected to their colleagues and clients from anywhere, anytime. 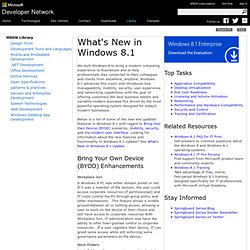 Windows 8.1 advances this vision and introduces new manageability, mobility, security, user experience and networking capabilities–with the goal of offering customers the best business tablets and versatile modern business PCs driven by the most powerful operating system designed for today’s modern businesses.Below is a list of some of the new and updated features in Windows 8.1 with regard to Bring Your Own Device (BYOD) scenarios, mobility, security, and the modern user interface. Looking for information about the new features and functionality in Windows 8.1 Update? See What's New in Windows 8.1 Update. Bring Your Own Device (BYOD) Enhancements Workplace Join.

Windows 8.1 Preview FAQ. What are the $WINDOWS.~Q and $INPLACE.~TR folders on my machine? Recently I did an in place upgrade of my Vista system to Windows 7. 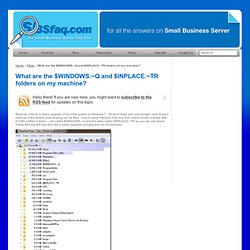 All went really well, and tonight I was doing a cleanup of the system and clearing out old files. 50 Windows 8 tips, tricks and secrets. Windows 8 has been with us for well over a year now, and if you're used to previous versions of Windows then you're going to notice that quite a bit has changed. 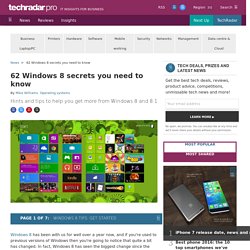 In fact, Windows 8 has seen the biggest change since the jump from Windows 3.1 to Windows 95. Out goes the Start menu, in comes the new touch-oriented Start screen with new Windows 8-style apps and new interface conventions. How To Add Programs To Your Startup On Windows Vista, 7 & 8. Windows startup can be both a blessing and a curse. 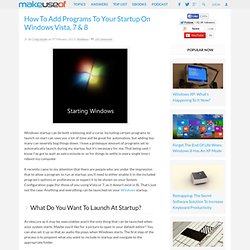 Including certain programs to launch on start can save you a lot of time and be great for automation, but adding too many can severely bog things down. I have a grotesque amount of programs set to automatically launch during my startup, but it’s necessary for me. That being said, I know I’ve got to wait an extra minute or so for things to settle in every single time I reboot my computer.

It recently came to my attention that there are people who are under the impression that to allow a program to run at startup, you’ll need to either enable it in the included program’s options or preferences or expect it to be shown on your System Configuration page (for those of you using Vista or 7, as it doesn’t exist in 8).

That’s just not the case. What Do You Want To Launch At Startup? As obscure as it may be, executables aren’t the only thing that can be launched when your system starts. Create a Shortcut Navigate To The Startup Folder. Changing the Pre-Login Screen Background Picture. Wow, there's a remarkable amount of confusion on this thread, probably caused by the way Windows 8 automatically remembers the last login and has both a lock screen and a login screen. Here's what's going on, and here's how I have achieved this. First, the important thing to recognize is that Windows 8 has two different lock screens plus two different login screens.

There is a lock screen that is customizable per user, and that one is changeable via WinKey+I, "Change PC Settings", "Personalize". This is the screen that appears whenever that user has locked his/her workstation, until a key is pressed, which brings up a user-specific login screen with only one user shown. The color, but not a regular full background image, of this latter screen (the single-user login screen) can be changed (at the same place as above, by changing the "Start Screen" instead of the "Lock Screen".

Tips for using Java on Windows 8. 10 different ways to Shutdown or Restart Windows 8 quickly. Looking for information on Windows 8 Shutdown!? Well, the first time I installed Windows 8, it was quite a frustrating effort, trying to find the shutdown or restart button in Windows 8. To be honest, I never imagined I would need to post about how to shutdown Windows, but seeing the number of questions on this topic, I am listing some ways you can shutdown or restart your Windows 8 computer. UPDATE: Windows 8.1 users can now Shutdown, Restart, Sleep, Hibernate Windows 8.1 using the WinX Power Menu. Windows 8.1 Update adds the option to even shut down Windows 8.1 from the Start Screen as shown below. Microsoft has provided the Shutdown and Restart buttons for Windows 8, under Settings in the Charms Bar. ITS Work Smart Guide: Exploring Windows 8.