The Windows 8 ecosystem: 5 best and 5 worst features. Download Windows 8 Release Preview. Microsoft sued for infringing patent on Live Tiles. Microsoft's been touting its Live Tiles concept ever since Windows Phone 7 launched two years ago, but the launch of Windows 8, Windows Phone 8, and particularly the Surface tablets appear to have given a company called SurfCast an opening to file a patent lawsuit over the concept. 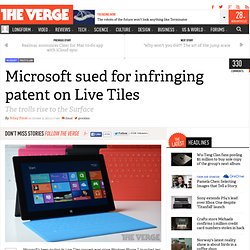 Microsoft's held high-profile launches of all three products lately, so news of the case is being reported widely — but a basic examination of SurfCast's patent reveals Microsoft's move into selling its own PCs is the key to the complaint. SurfCast owns US Patent #6,724,403, which was filed in October 2000 and issued in April 2004. Broadly, the patent covers selecting a variety of information sources, assigning each of those sources to a tile, and updating those tiles at variable refresh rates. Most "software patents" are really hybrids of hardware and software. Windows Activation - Genuine, License, KMS, MAK, VAMT. Plan. Use of Microsoft Copyrighted Content. Published: April 26, 2005 | Updated: June, 2013 Microsoft products and services—including images, text, and software downloads (the "content")—are owned either by Microsoft Corporation or by third parties who have granted Microsoft permission to use the content. 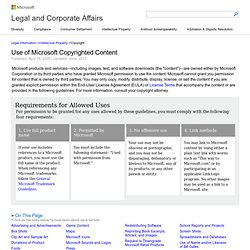 Microsoft cannot grant you permission for content that is owned by third parties. You may only copy, modify, distribute, display, license, or sell the content if you are granted explicit permission within the End-User License Agreement (EULA) or License Terms that accompany the content or are provided in the following guidelines. For more information, consult your copyright attorney. Requirements for Allowed Uses For permission to be granted for any uses allowed by these guidelines, you must comply with the following four requirements: If your use includes references to a Microsoft product, you must use the full name of the product. 2.

Windows 8 has arrived! Welcome to Windows 8 The time has come for the online super powers of social, and cloud based computing to merge into a single system, that system is made up of Microsoft's finest computer software engineering techniques, and its name is Windows 8. 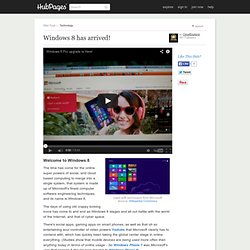 The days of using old crappy looking icons has come to and end as Windows 8 stages and all out battle with the world of the Internet, and that of cyber space. There's social apps, gaming apps on smart phones, as well as that oh so entertaining soul controller of video powers Youtube that Microsoft clearly has to contend with, which has quickly been taking the global center stage in online everything. (Studies show that mobile devices are being used more often then anything today in terms of online usage - So Windows Phone 7 was Microsoft's very first answer & they're now moving to Windows Phone 8).

The Windows 8 Pro download is available on the official Microsoft.com website. What's with the Metro UI? What's up with the boxes? Windows Compatibility Center: Find Updates, Drivers, & Downloads for Windows 8, Windows RT and Windows 7. Windows 8 is Here! WIndows 8 is here folks, and its fully ready for users to buy it from Microsoft, you can now be the proud owner of your very own Windows 8 Pro operating system. 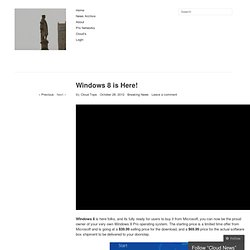 The starting price is a limited time offer from Microsoft and is going at a $39.99 selling price for the download, and a $69.99 price for the actual software box shipment to be delivered to your doorstep. It features the brand new Metro Style UI interface, and its very appealing visually, however it takes some time to get use to it all, and so we are doing folks a favor by providing the tutorial guides here to help anyone learn how to utilize their new Win 8 if they so chose to make the purchase. Below is the first of many guides through it all, and there’s loads more to come, show casing hints, tips, and tricks to make the Windows 8 user experience become a welcoming experience an complete transition from using the older operating systems. 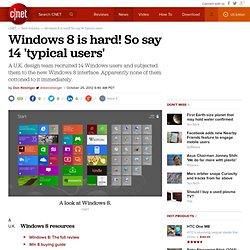 The firm in question, Foolproof, had 14 "typical users" try out Windows 8 for the first time to see how they fared using the new-look operating system. This tiny group reportedly consisted of regular Windows users, so they supposedly weren't coming to the Microsoft universe cold. But Microsoft's new user interface, which largely consists of a series of tiles, ditching the traditional look and feel of Windows, "comes with a huge learning overhead. " Foolproof's relatively small number of testers made several observations, including: The user interface was "fresh and attractive," but by the end of the session, none of them "felt confident using the new interface.

" That there is a steep learning curve is nothing new to those who have used the software. Application Compatibility, Windows 7, Vista. Download SkyDrive - Access, store, and share your files. 7 reasons why Windows RT works. Touch hardware and Windows 8 - Building Windows 8. Last September we blogged about experiencing Windows 8 touch on Windows 7 hardware, introducing the story of touchscreen hardware, how it is evolving, and what we expect Windows 8 will bring to the ecosystem of touch. 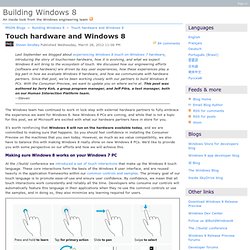 We discussed how our engineering efforts (software and hardware) are driven by key user experiences, how these experiences play a big part in how we evaluate Windows 8 hardware, and how we communicate with hardware partners. Since that post, we’ve been working closely with our partners to build Windows 8 PCs. With the Consumer Preview, we want to update you on where we’re at. Windows 8 app developer blog. Is all your gear Windows 8 compatible? Migrating to a new operating system is a bit like getting ready for a first date. 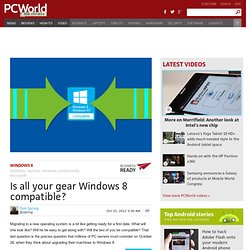 What will she look like? Will he be easy to get along with? Will the two of you be compatible? That last question is the precise question that millions of PC owners must consider on October 26, when they think about upgrading their machines to Windows 8. The good news: Unlike the painful upgrade that many users experienced when moving from Windows XP to Vista, the move from Windows 7 to 8 should be much easier—at least that's what Microsoft is promising. 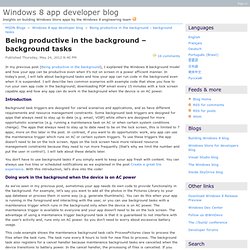