VPN Single Sign On with Windows 7. Introdution In the good old days of Windows XP, businesses that needed to enable their mobile users to be able to establish a VPN connection to the corporate network prior to interactively logging on to their laptop computers needed to use third-party VPN client software to accomplish this. 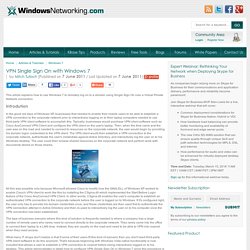 Typically, businesses would purchase VPN client software such as Cisco AnyConnect VPN Client and configure the VPN client on the user's laptop. Then, when the time came and the user was on the road and needed to connect to resources on the corporate network, the user would begin by providing his domain logon credentials to the VPN client. The VPN client would then establish a VPN connection to the corporate network, authenticate the user's credentials against Active Directory, and interactively log the user on to his Windows desktop. The user could then browse shared resources on the corporate network and perform work with documents stored on those shares. Configuring Internet Information Services 7.0 for Windows Communication Foundation. Internet Information Services (IIS) 7.0 has a modular design that allows you to selectively install components that are required. 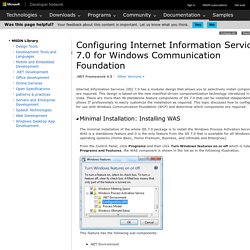 This design is based on the new manifest-driven componentization technology introduced in Windows Vista. There are more than 40 standalone feature components of IIS 7.0 that can be installed independently. This allows IT professionals to easily customize the installation as required. This topic discusses how to configure IIS 7.0 for use with Windows Communication Foundation (WCF) and determine which components are required. The minimal installation of the whole IIS 7.0 package is to install the Windows Process Activation Service (WAS). From the Control Panel, click Programs and then click Turn Windows features on or off which is listed under Programs and Features, the WAS component is shown in the list as in the following illustration.

This feature has the following sub-components: .NET Environment Configuration APIs Process Model Tasks Concepts. What is proxy server? - Definition from WhatIs.com. A proxy server is a dedicated computer or a software system running on a computer that acts as an intermediary between an endpoint device, such as a computer, and another server from which a user or client is requesting a service. 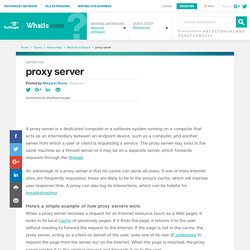 The proxy server may exist in the same machine as a firewall server or it may be on a separate server, which forwards requests through the firewall. An advantage of a proxy server is that its cache can serve all users. If one or more Internet sites are frequently requested, these are likely to be in the proxy's cache, which will improve user response time. A proxy can also log its interactions, which can be helpful for troubleshooting. Here’s a simple example of how proxy servers work: When a proxy server receives a request for an Internet resource (such as a Web page), it looks in its local cache of previously pages. Proxy servers are used for both legal and illegal purposes. Fiddler free web debugging proxy. Application Blocked. Click For Details - Java. When running a Java application, you may get the following error: Application Blocked. 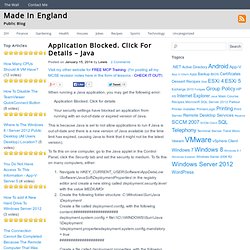 Click for detailsYour security settings have blocked an application from running with an out-of-date or expired version of Java. This is because Java is set to not allow applications to run if Java is out-of-date and there is a new version of Java available (or the time limit has expired, causing Java to think that it might not be the latest version). To fix this on one computer, go to the Java applet in the Control Panel, click the Security tab and set the security to medium. To fix this on many computers, either: Next, either use group policy to roll out the registry change or file addition. Note that option 1 is user based, while option 2 is computer wide. Be aware that Java MEDIUM security level will make your computer available to some vulnerabilities. Rating: 10.0/10 (2 votes cast) PsKill. PsExec. Introduction Utilities like Telnet and remote control programs like Symantec's PC Anywhere let you execute programs on remote systems, but they can be a pain to set up and require that you install client software on the remote systems that you wish to access.

PsExec is a light-weight telnet-replacement that lets you execute processes on other systems, complete with full interactivity for console applications, without having to manually install client software. PsExec's most powerful uses include launching interactive command-prompts on remote systems and remote-enabling tools like IpConfig that otherwise do not have the ability to show information about remote systems. Note: some anti-virus scanners report that one or more of the tools are infected with a "remote admin" virus. None of the PsTools contain viruses, but they have been used by viruses, which is why they trigger virus notifications.

Installation Just copy PsExec onto your executable path. PsTools. Windows Logon Scripts - VBScript examples to create printers, map network drives. Introduction Logon Scripts In this section I will give you examples of how to build the VBScript to use in your logon script. 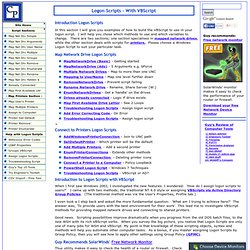 I will help you chose which methods to use and which variables to change. There are two sections; one section specialises in mapped network drives, while the other section deals with scripts for printers. Using Logon Scripts in Pure and Mixed Active Directory Environments. Logon scripts can be useful tools for configuring desktop environments for users. 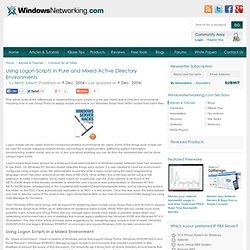 Some of the things such scripts can be used for include mapping network drives, connecting to shared printers, gathering system information, synchronizing system clocks, and so on. In fact, just about anything you can do from the command-line can be done using a logon script. Windows Logon Scripts - VBScript examples to create printers, map network drives. Create Strong Passwords. Petri IT Knowledgebase. Windows 2003 Server - Microsoft Remote Shutdown command switches. Shutdown Command in Windows Server 2003 Shutdown is an exciting new command line program available in Windows 2003 and XP. 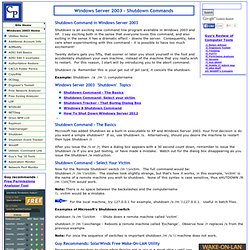 I say exciting both in the sense that everyone loves this command, and also exiting in the sense it has a dramatic effect - downs the server. Consequently, take care when experimenting with this command - it is possible to have too much excitement! Twenty dollars gets you fifty, that sooner or later you shoot yourself in the foot and accidentally shutdown your own machine, instead of the machine that you really wish to restart. For this reason, I start will by introducing you to the abort command: Shutdown /a Remember this is your get out of jail card, it cancels the shutdown.