2012 R2 RDS Shadowing "Permissions" Hi All, Just wondering if anyone has found a "workaround" for the requirement to be an Administrator to perform Remote Desktop Shadowing in Server 2012 R2? 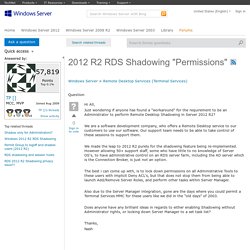 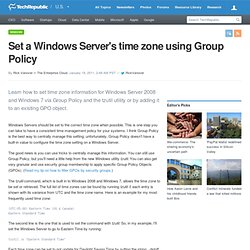 Windows Servers should be set to the correct time zone when possible. Hyper-V Hell - Revert To Snapshot Gone Wrong! The first thing I have to do right off the bat is apologize that I do not have nearly as many details as I wish I had going into this post - When things went wrong, I panicked instead of keeping my cool and taking my time. 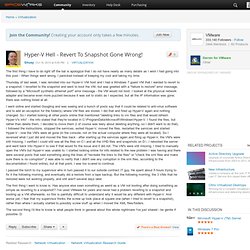 Thursday of last week, I was remoted into our Hyper-V VM host and I had a Windows 7 guest VM that I wanted to revert to a snapshot. I reverted to the snapshot and went to boot the VM, but was greeted with a "failure to restore" error message, followed by a "Microsoft synthetic ethernet port" error message - the VM would not boot. MS gets you hooked on Server 2012 Datacenter, jacks up the price for R2.

High performance access to file storage Microsoft is cranking up the price of its Datacenter edition of Windows Server 2012 for the forthcoming R2 release – it's up a whopping 28 per cent on today's price tag. 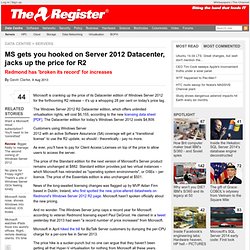 The price of the Standard edition for the next version of Microsoft’s Server product remains unchanged at $882. Sysadmins hail Windows Server 2012 R2's killer ... clipboard? High performance access to file storage TechEd Australia Tens of thousands of words have already been written about Microsoft's purchase of Nokia, and as far as The Register can tell, none of them are getting read by the hordes of sysadmins and developers that descended on the Gold Coast for TechEd. 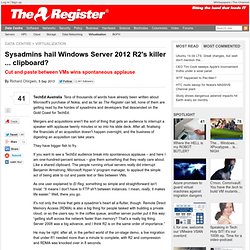 Mergers and acquisitions aren't the sort of thing that gets an audience to interrupt a speaker with applause twenty minutes or so into his slide deck. After all, finalising the financials of an acquisition doesn't happen overnight, and the business of digesting an acquisition can take years. They have bigger fish to fry. Microsoft's VDI deals make Windows Server cheapest desktop OS. 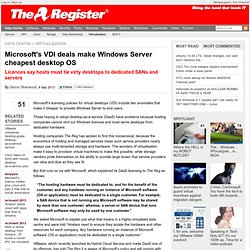 Yes, we know Active Directory cloud sync is a MESS, says Microsoft. Boost IT visibility and business value Microsoft has made a confession: “integrating your on premises identities with Azure AD is harder than it should be” and requires “too many pages of documentation to read, too many different tools to download and configure, and far too much on premises hardware required.” 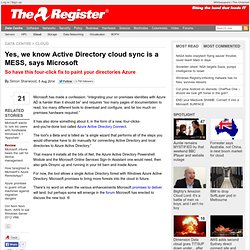 It has also done something about it, in the form of a new, four-clicks-and-you're-done tool called Azure Active Directory Connect. The tool's a Beta and is billed as “a single wizard that performs all of the steps you would otherwise have to do manually for connecting Active Directory and local directories to Azure Active Directory.” That means it installs all the bits of.Net, the Azure Active Directory Powershell Module and the Microsoft Online Services Sign-In Assistant one would need, then also gets Dirsync up and running in your bit barn and inside Azure.

For now, the tool allows a single Active Directory forest with Windows Azure Active Directory. File and Directory Access Rights Constants. Logon Type Codes Revealed. The logon/logoff category of the Windows security log gives you the ability to monitor all attempts to access the local computer. 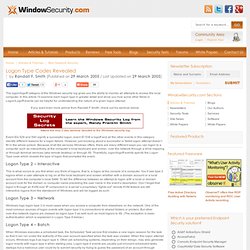 In this article I’ll examine each logon type in greater detail and show you how some other fields in Logon/Logoff events can be helpful for understanding the nature of a given logon attempt. If you want even more advice from Randall F Smith, check out his seminar below: Attend the only 2-day seminar devoted to the Windows security log Event IDs 528 and 540 signify a successful logon, event ID 538 a logoff and all the other events in this category identify different reasons for a logon failure. 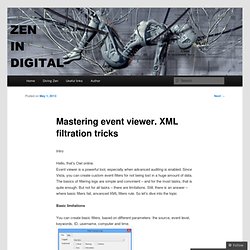 Consider following scenarios. You have an old application, that runs as a service under a domain account. You can`t change the password of the account – you don`t know, what else runs using it, but you must find computers, that still have the service running. Logic is simple – pick the domain controller security log, filter in out by the name of the account and create the list of computers, using additional info in events. Auditing File Access on File Servers - Premier Field Engineering. This article was contributed by Liju Varghese, a Senior Premier Field Engineer from Canada, based on a recent engagement. 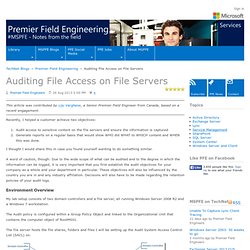 Recently, I helped a customer achieve two objectives: Audit access to sensitive content on the file servers and ensure the information is captured Generate reports on a regular basis that would show WHO did WHAT to WHICH content and WHEN this was done. I thought I would share this in case you found yourself wanting to do something similar. A word of caution, though: Due to the wide scope of what can be audited and to the degree in which the information can be logged, it is very important that you first establish the audit objectives for your company as a whole and your department in particular. These objectives will also be influenced by the country you are in and any industry affiliation. Environment Overview.

VS 2010 SendKeys brings up Cannot Hook Error-VBForums. Using Let's Encrypt with IIS on Windows. Let's Encrypt is a new open source certificate authority that promises to provide free SSL certificates in a standardized, API accessible and non-commercial way. If you've installed SSL certificates in the past, you're probably familiar with the process of signing up for a certificate with some paid for provider and then going through the manual process of swapping certificate requests and completed requests. The request contains no certificate template information 0x80094801 (-2146875391). Denied by Policy Module 0x80094801. Hi, I understand you can get a certificate if you have already created a request, but there is still error when trying to submit from MMC. This issue may be caused by incorrect Certificate Template permission settings. Let’s give Authenticated user Enroll permission: 1. Open MMC, click File menu, choose Add/Remove Snap-in, choose Certificate Templates, click OK. 2.

From the Start screen, click or search for Internet Information Services (IIS) Manager and open it. Click on the server name. From the center menu, double-click the "Server Certificates" button in the "IIS" section (it is in the middle of the menu). After you receive your SSL Certificate from DigiCert, you can install it.