Howtogeek. Windows 10 Home now forces you to sign in with a Microsoft account—unless you disconnect from the internet first. 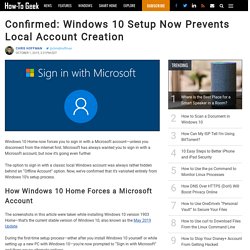 How to Stop Windows 10 From Reopening Your Previous Applications After Restarting Your PC. When you shut down or sign out, Windows 10 remembers which applications you had open. 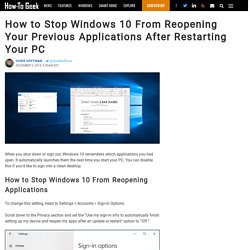 It automatically launches them the next time you start your PC. Thewindowsclub. Open This PC instead of Quick Access in Windows 10 Explorer. In Windows 10, File Explorer opens at the Quick Access folder by default. 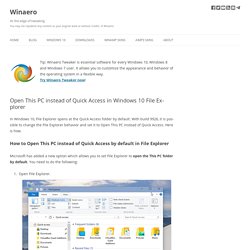 With build 9926, it is possible to change the File Explorer behavior and set it to Open This PC instead of Quick Access. Here is how. 4 Ways To Open Command Window in a Folder In Windows 10. Command Prompt is the command-line which enables users to execute different programs and commands. 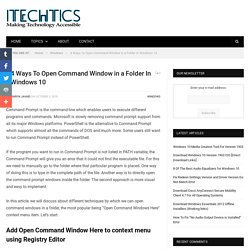 Microsoft is slowly removing command prompt support from all its major Windows platforms. PowerShell is the alternative to Command Prompt which supports almost all the commands of DOS and much more. Some users still want to run Command Prompt instead of PowerShell. If the program you want to run in Command Prompt is not listed in PATH variable, the Command Prompt will give you an error that it could not find the executable file. For this we need to manually go to the folder where that particular program is placed. How to disable the lock screen in Windows 10. The Windows 10 lock screen divides many users. 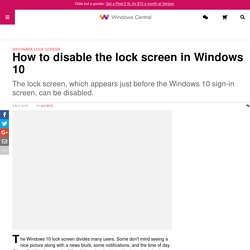 Some don't mind seeing a nice picture along with a news blurb, some notifications, and the time of day. Others find it to be a waste. Why click or drag just to get to the actual sign-in screen? Disabling the lock screen is entirely possible as long as you're running the Creators Update or anything newer, including the Windows 10 April 2018 Update. The steps required are a bit different for Home and Pro versions, but we'll explore them both here.

How to Delete EFI System Partition in Windows 10/8.1/8/7/XP/Vista - EaseUS. Usually, you can easily delete a partition in Disk Management. 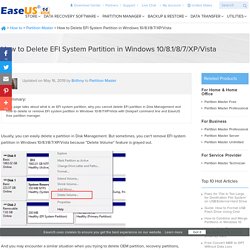 But sometimes, you can't remove EFI system partition in Windows 10/8.1/8/7/XP/Vista because "Delete Volume" feature is grayed out. And you may encounter a similar situation when you trying to delete OEM partition, recovery partitions, system reserved partition. How to restore a Windows 10 system image to an existing or larger. 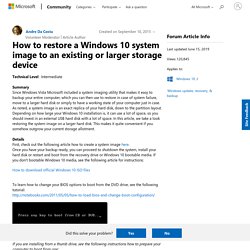 Just to start I have to say that I’m a deprived widower of Rescue & Recovery, the wonderful former IBM (then until Windows 7, Lenovo) program that saved me a lot of times with its incremental backup/restore functions. Now, in Windows 10 that program is no more supported, and I asked many time for a valid substitute. Microsoft and also Lenovo, answered that the need of R&R is completely overcome by the standard Windows 10 Backup and restore functions. Thus I used the standard functions making regularly both system images and file backups.

Then all OK? I can't set a program as the default to open a filetype with in Windows 7. 13 Windows Programs That Are Better Alternatives to MacOS Apps. Nobody can deny that Mac users really love their Macs. 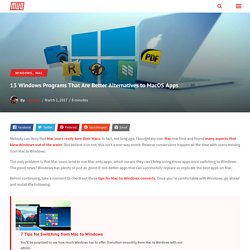 In fact, not long ago, I bought my own Mac machine and found many aspects that blew Windows out of the water. But believe it or not, this isn’t a one-way street. Reverse conversions happen all the time with users moving from Mac to Windows. The only problem is that Mac users tend to use Mac-only apps, which means they can’t keep using those apps once switching to Windows. The good news? How to Block An Application from Accessing the Internet with Windows Firewall. Most of the time we want our applications online and connected to both our local network and the greater Internet. 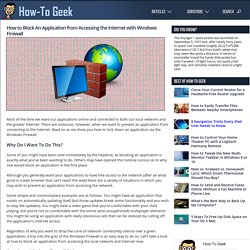 There are instances, however, when we want to prevent an application from connecting to the Internet. How to Declutter the Right Click Menu the Easy Way. On a fresh installation of Windows, the Right Click Menu (also called the Context Menu) is relatively clean and organized. 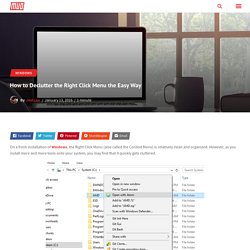 However, as you install more and more tools onto your system, you may find that it quickly gets cluttered. For example, in the screenshot above, you can see that my own Context Menu is packed with a bunch of shortcuts — many of which I’ve never used and never intend to use. The 10 Cleverest Ways to Use Linux to Fix Your Windows PC. You might not be ready to accept Linux as your desktop yet, but you can still use it to save your Windows PC—whether you need to reset passwords, recover deleted files, or scan for viruses, here’s how to do it. What we’ll do today is walk you through some of the most useful ways that you can repair your Windows PC using an Ubuntu Live CD, but keep in mind that most of these tasks can be performed with any version of Linux.

Image modified from Smuggle559’s Broken Windows Make Your Ubuntu Live CD. Three Ways to Access the Windows 8 or 10 Boot Options Menu. The boot options have been consolidated in Windows 8 and 10 into a single menu, called the “boot options menu,” providing access to repair tools and options for changing Windows startup behavior, such as enabling debugging, booting into safe mode, and launching into a recovery environment. The days of pressing a function key or Esc to interrupt the boot process and get into the BIOS configuration (in UEFI enabled systems) are gone.

There are three ways of accessing the new boot options menu in Windows 8 or 10 and we’ll show you how. Hold Down Shift While Choosing Restart Instead of going all the way into the Settings screens, there is a faster way to access the boot options menu. How to Create an ISO Image of Your Windows System.

The workaround is pretty straightforward, just follow the steps below! You may try the numbered steps further below for a 100% “official” installation that also works for deployment (silently) on multiple computers, OR you may try an older version 7.7.6 which some report to be working (click to download 7.7.6), OR try this custom installer which makes it easier to install a working, up to date version of QuickTime on Windows 10: (Or click here to download previous version: 7.7.7) Current version and build is 7.7.8 (1680.95.71) How to Get Colored Window Title Bars on Windows 10 (Instead of White) Windows 10 uses white window title bars by default. This is a big change from Windows 8, which allowed you to pick any color you wanted. But you can give those title bars some color with this quick trick. This trick only affects traditional desktop apps, not the new universal apps.

Universal apps will always use white unless their developers specify a different window title bar color. However, you can also make many universal apps use a hidden dark theme. Lifehacker.com - StumbleUpon. 5 Windows 7 Features You Didn't Know Existed. Windows XP may be gone, but all is not lost. ShareMouse – Use One Mouse & One Keyboard Across Multiple Computers. Better even than a multiple monitor set-up, is the multiple computer set-up. A familiar phenomenon for the geek with a laptop for on the go and a desktop computer at home or at work. Instead of splitting your computing power over several displays, you’re putting several disjunct systems in parallel. Then again, it’s almost comical how you have to juggle your computer mice and keyboards. An awkward factor that only increases with the number of devices on your desk.