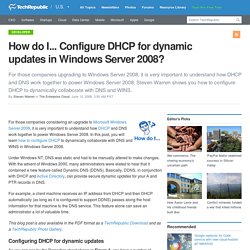 In this post, you will learn how to configure DHCP to dynamically collaborate with DNS and WINS in Windows Server 2008. Under Windows NT, DNS was static and had to be manually altered to make changes. With the advent of Windows 2000, many administrators were elated to hear that it contained a new feature called Dynamic DNS (DDNS).

Basically, DDNS, in conjunction with DHCP and Active Directory, can provide secure dynamic updates for your A and PTR records in DNS. For example, a client machine receives an IP address from DHCP and then DHCP automatically (as long as it is configured to support DDNS) passes along the host information for that machine to the DNS service. This blog post is also available in the PDF format as a TechRepublic Download and as a TechRepublic Photo Gallery. Understanding Dynamic Update. Domain Name System (DNS) client computers can use dynamic update to register and dynamically update their resource records with a DNS server whenever changes occur. 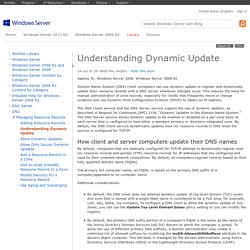 This reduces the need for manual administration of zone records, especially for clients that frequently move or change locations and use Dynamic Host Configuration Protocol (DHCP) to obtain an IP address. The DNS Client service and the DNS Server service support the use of dynamic updates, as described in Request for Comments (RFC) 2136, "Dynamic Updates in the Domain Name System. " The DNS Server service allows dynamic update to be enabled or disabled on a per-zone basis at each server that is configured to load either a standard primary or directory-integrated zone. 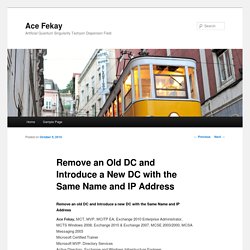 Overcome Windows 2008 R2 backup to network share limitation. Restoring Windows Server to Bare Metal. Introduction Successful disaster recovery is all about preparation because bad things happen when you least want them to. 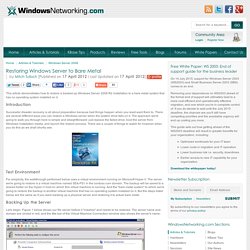 There are several different ways you can restore a Windows server when the system drive fails on it. The approach we're going to walk you through here is simple and straightforward: just replace the failed drive, boot the server from Windows installation media, and launch the restore process. There are a couple of things to watch for however when you do this as we shall shortly see. Test Environment For simplicity, the walkthrough performed below uses a virtual environment running on Microsoft Hyper-V. Backing Up the Server Let's begin. Figure 1: The server before it crashed We'll map a drive letter to a shared folder named Backups on the Hyper-V host machine so we can store our backup "on the network" when we create it:

Synchronize time with external NTP server on Windows Server 2008 R2. Time synchronization is an important aspect for all computers in a Windows domain. 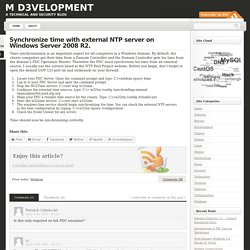 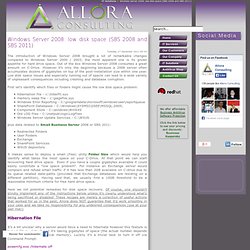 Out of the box Windows Server 2008 consumes a great amount on C-Drive. However it's only the beginning because a 2008 server often accumulates dozens of gigabytes on top of the post-installation size within one year. Low disk space issues and especially running out of spacle can lead to a wide variety of unpleasant consequences including crashing and database corruption. First let's identify which files or folders might cause the low disk space problem: SharePoint Config database Log file too big – reduce it! SharePoint Config database logs are one thing to keep an eye on since they do have a tendency to grow. 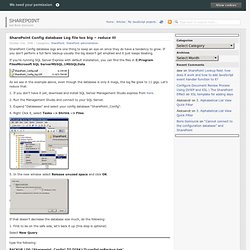 If you don’t perform a full farm backup usually the log doesn’t get emptied and it just keeps bloating. If you’re running SQL Server Express with default installation, you can find the files in C:Program FilesMicrosoft SQL ServerMSSQL.1MSSQLData As we see in the example above, even though the database is only 6 megs, the log file grew to 11 gigs. SBS 2008 BPA informa che il file di registro dei database di configurazione di Windows SharePoint Services è in espansione (attualmente è superiore a un GB) Recovering Disk Space on the C: Drive in Small Business Server 2008 - The Windows Server Essentials and Small Business Server Blog. [Today’s post comes to us courtesy of Damian Leibaschoff and Wayne Gordon McIntyre from Commercial Technical Support and Chris Puckett from Product Quality] IIS and SBS Logs (This is expanding on the existing post “Reclaiming Disk Space Lost to IIS Logs on SBS 2003 and SBS 2008”) By default, all IIS hosted web sites have logging enabled, this can lead to some large folders in C:\inetpub\logs\LogFiles (Review this post in case you have moved your log files). 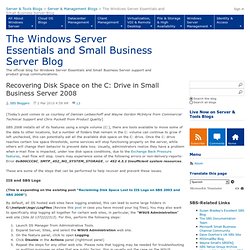 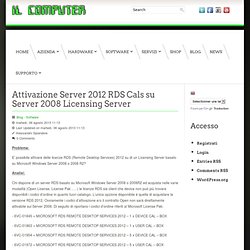 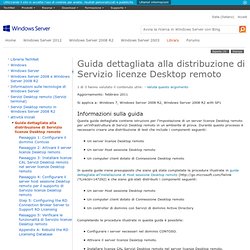 Using iSCSI for Windows Image Backup and Bare Metal Recovery with BackupAssist. Windows Server Backup – Bare metal restore off iSCSI. April 6th, 2011 by Linus Hi All, On Tuesday, I think we performed a world’s first operation on our test environments… a bare metal restore from a backup on iSCSI target, from the Windows Recovery Environment. The problem is that the WinRE (that you get by booting off the Windows installation DVD on Windows Vista and onwards) does not include the iSCSI Initiator. However, we have been experimenting with our own recovery environment that does include the iSCSI Initiator… and we managed to get it to work!

Needless to say, we had a small crowd around our test machine when I “clicked the button” to start the restore… we held our breaths (for around 10 minutes) while the restore took place, and there were high fives when the machine booted back up again. This feature is still in “proof of concept” stage, so it’s many months away from being included in the main BackupAssist release. Baremetal recovery from iSCSI target. Add iSCSI initiator to the Windows Server 2008/2008R2/SBS 2008/SBS 2011 installation DVD. These days, in large environments, iSCSI has become the defacto standard to make block storage readily available to other computers. A possible deployment scenario is attaching an iSCSI target to a Windows server to create backups using the built-in Windows backup software. However, the Windows installation DVD (which is required for a BMR, Bare-Metal Restore) doesn’t come with the Microsoft iSCSI initiator. So we’re going to add it ourselves.

This works for all installation DVD’s starting with Windows Vista up to Windows 7 including all server versions. 25/01/2012: the registry entries are now a hyperlink to a file you can download. Sharepoint ldf file has become very large. Large LDF files in windows SBS 2008. By default the MSSQL database is set to full backup (which doesn't help if your backup software doesn't "play nice" with sql). Problem comes in when after some months, Exchange stop working altogether because the drive has been files by SharePoint's database (namely the replay logs, or .LDF files) To rectify this, you need to: Connect to the sharepoint database in SBS 2008 with the following link: \\.

Summary: It is possible to backup to NAS using Windows Server 2008 Backup. However, the in-built wizards in Windows don't allow for this. Instead, you need to script wbadmin yourself, or use a 3rd party product like BackupAssist. A common question I see asked is, "How can I schedule backups to a NAS on Server 2008? " The simple answer is - with the built-in wizards in Server 2008 and SBS 2008, you can't! That's right - the wizards that Microsoft deploy with the operating system will only allow you to backup to USB or Firewire connected hard drives, and with SBS 2008, you may also backup to locally connected hard drives. So if you wish to backup to NAS, you have two options: Script "wbadmin.exe" yourself and schedule it using the Windows Task Scheduler Use a 3rd party product like BackupAssist to schedule, monitor and report on your backups Before we describe each method, here's a summary of the pros and cons of each: Method 1 - scripting "wbadmin.exe"