How To Disable a Virtual WiFi Network Adapter in Windows 8.1. In a previous tutorial, we've shown how to turn any Windows 8.1 laptop or device into a WiFi access point. 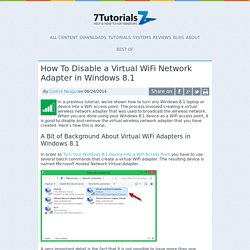 The process involved creating a virtual wireless network adapter that was used to broadcast the wireless network. How To Make WiFi Tethering in Windows 8.1 - T2Lead. Previously i posted the same tutorial on Windows 8 and i got huge response for the post. 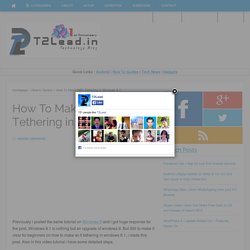 How To Fix "The Hosted Network Couldn't Be Started" in Windows - T2Lead. Wi-Fi Tethering is one of the amazing feature from windows. 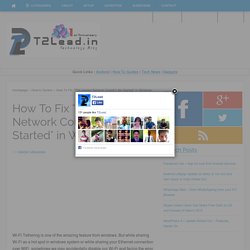 But while sharing Wi-Fi as a hot spot in windows system or while sharing your Ethernet connection over WiFi, sometimes we may accidentally disable our Wi-Fi and facing the error like “The Hosted Network Couldn’t be Started” while executing “netsh wlan start hostednetwork” command. Lets see how to fix it. Before you go checkout There are multiple ways to fix this problem and let me share the 2 methods which solved the issue for me. How do I turn my Windows 8.1 laptop into a wireless hotspot? - fixedByVonnie. You’ve already figured out how to transform your mobile phone into a wireless hotspot and now you’re wondering if you can pull off the same trick with your laptop. 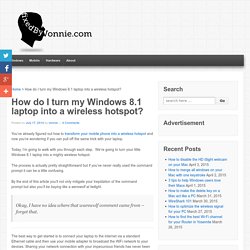 Today, I’m going to walk with you through each step. We’re going to turn your little Windows 8.1 laptop into a mighty wireless hotspot. The process is actually pretty straightforward but if you’ve never really used the command prompt it can be a little confusing. By the end of this article you’ll not only mitigate your trepidation of the command prompt but also you’ll be baying like a werewolf at twilight. Okay, I have no idea where that warewolf comment came from – forget that. The best way to get started is to connect your laptop to the internet via a standard Ethernet cable and then use your mobile adapter to broadcast the WiFi network to your devices. 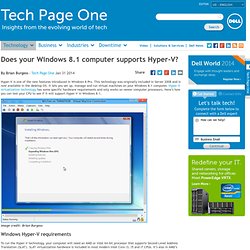 This technology was originally included in Server 2008 and is now available in the desktop OS. It lets you set up, manage and run virtual machines on your Windows 8.1 computer. Hyper-V virtualization technology has some specific hardware requirements and only works on newer computer processors. Here’s how you can test your CPU to see if it will support Hyper-V in Windows 8.1. Image credit: Brian Burgess Windows Hyper-V requirements To run the Hyper-V technology, your computer will need an AMD or Intel 64-bit processor that supports Second Level Address Translation (SLAT). In addition to the CPU requirements, your system will also need a minimum of 4GB of RAM and the 64-bit version of Windows 8.1. Using CoreInfo Created by Microsoft wiz, Mark Russinovich, CoreInfo is a command line utility that will work on both AMD and Intel systems.

Now, in the command line type: cd c:\ when the C: prompt comes up type: coreinfo.exe –v. Boot2VHD-Part 4-BCDEdit is the Magic – Deep Dive Boot Configuration Manager. Native Boot To VHD (Boot2VHD) – Everything You Need To Know Part 4… In this multi-part video series we will dive deep into a the new virtualization feature built into Windows Server 2008 R2 and Windows 7. 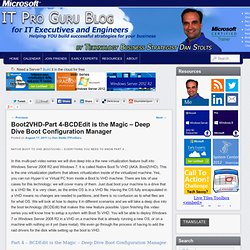 It is called Native Boot To VHD (AKA: Boot2VHD). This is the one virtualization platform that allows virtualization inside of the virtualized machine. Yes, you can run Hyper-V or Virtual PC from inside a Boot to VHD machine. There are lots of use cases for this technology; we will cover many of them. Part 4 – BCDEdit is the Magic – Deep Dive Boot Configuration Manager 100% Demo deep dive into BCDEdit. DownloadWMV Download | WMA | MP3. Coreinfo. A Description of the Diskpart Command-Line Utility. Diskpart differs from many command-line utilities because it does not operate in a single-line mode. 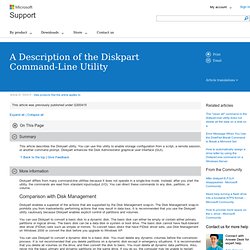 Having read about ESXi which can be bought from Dell / HP in an embedded manner, which lets you boot without harddrive I decided to go on the journey to accomplish the same thing with Hyper-V Server 2008 R2. 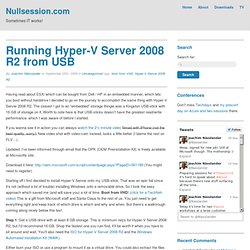 The closest I got to an “embedded” storage thingie was a Kingston USB-stick with 16 GB of storage on it. Worth to note here is that USB-sticks doesn’t have the greatest read/write performance, which I was aware of before I started. If you wanna see it in action you can always watch the 2½ minute video filmed with iPhone (not the best quality, sorry!)

New video shot with video-cam instead, looks a little better (I blame the rest on FLV…). Updated: I’ve been informed through email that the OPK (OEM Preinstallation Kit) is freely available at Microsofts site. Installing Windows Server 2008 on a bootable USB?