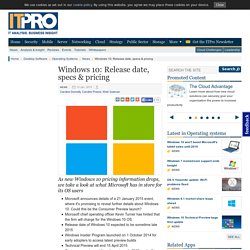 Could this be the Consumer Preview launch? Microsoft chief operating officer Kevin Turner has hinted that the firm will charge for the Windows 10 OS.Release date of Windows 10 expected to be sometime late 2015Windows Insider Program launched on 1 October 2014 for early adopters to access latest preview buildsTechnical Preview will end 15 April 2015 Consumer preview set for release in early 2015, and will showcase previously unseen featuresPartner-only Windows 10 build leaked onto file sharing sites, revealing further details about next-gen OS. The upcoming Windows 10 Consumer Edition Preview will feature a Cortana search bar and updated apps, according to a leak. 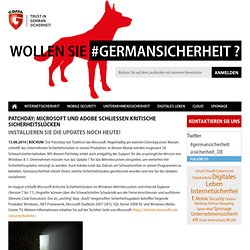 What our tools are less good at, however, is locating these parts. We often try to find some trick to latch onto the interesting subroutines of the target. Common techniques include searching for strings or looking for interesting imports/exports. In the absence of such hints, a long and tedious walk through the call graph awaits us; we're ill-equipped against pure code. How to visualize memory accesses? I visualized memory accesses on a 2D grid s. t. X-axis represents an accessed memory locationY-axis represents time and increases downwardred = write accesses, green = read accesses, yellow = both Without further ado, let's check out some actual visualizations. Victim 1: pngcheck Our first victim is the pngcheck utility from the libpng open source library. 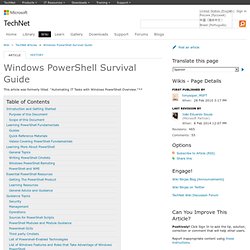 "** Introduction and Getting Started PowerShell is a vast product, especially when you take into account how it's used in other products such as Lync Server, Exchange, and the Windows Operating System. It can be a little daunting to those new with PowerShell - there is a vast array of deeply technical discussions of all of PowerShell's many aspects, quirks and peculiarities and all. Purpose of this Document The purpose of this document is to help you to learn more about PowerShell and to be successful in applying it. Scope of this Document. PenTest & Hacking Tools: [Raft v3.0.1] Response Analysis and Further Testing Tool. Windows community. Top 10 Active Directory Tasks Solved with PowerShell. Managing Active Directory (AD) with Windows PowerShell is easier than you think -- and I want to prove it to you. 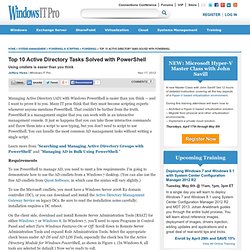 Many IT pros think that they must become scripting experts whenever anyone mentions PowerShell. That couldn't be further from the truth. PowerShell is a management engine that you can work with in an interactive management console. It just so happens that you can take those interactive commands and throw them into a script to save typing, but you don't need to script to use PowerShell. You can handle the most common AD management tasks without writing a single script. Learn more from "Searching and Managing Active Directory Groups with PowerShell" and "Managing AD in Bulk Using PowerShell. " Requirements To use PowerShell to manage AD, you need to meet a few requirements. To use the Microsoft cmdlets, you must have a Windows Server 2008 R2 domain controller (DC), or you can download and install the Active Directory Management Gateway Service on legacy DCs. New security hole found in multiple Java versions.

The same team of Polish researchers who discovered a critical security hole in Oracle’s Java software say that they uncovered another such hole, which could be used to bypass Java’s secure application “sandbox” – this time on many more versions of Java. Researchers at Security Explorations, based in Poland, discovered the flaw in Oracle’s Java Standard Edition (SE) and developed a proof of concept exploit for it which permits “complete Java security sandbox bypass,” according to the company’s CEO, Adam Gowdiak. Writing in an email response to questions from Naked Security, Gowdiak said that he couldn’t discuss details of the vulnerability, beyond saying that the flaw: “allows to violate a fundamental security constraint of a Java Virtual Machine (type safety).”

“Upon convincing the user to visit such a website, typically by getting them to click a link in an email or in an Instant Messenger message, malicious web content could be delivered to affected systems,” Follow @paulfroberts. IT Audit Automation: Windows Baseline Audits. Managing the security of your Windows workstations is a fairly simple task when you leverage technologies like Group Policy. 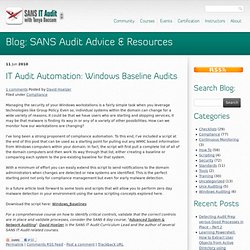 Even so, individual systems within the domain can change for a wide variety of reasons. It could be that we have users who are starting and stopping services, it may be that malware is finding its way in or any of a variety of other possibilities. How can we monitor how our workstations are changing? I've long been a strong proponent of compliance automation. rEFIt - An EFI Boot Menu and Toolkit. Windows Phone SMS attack discovered, reboots device and disables messaging hub. Microsoft’s range of Windows Phone devices suffer from a denial-of-service attack that allows attackers to disable the messaging functionality on a device. 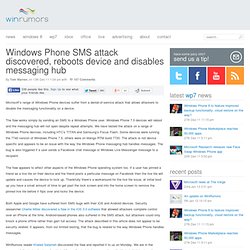 The flaw works simply by sending an SMS to a Windows Phone user. Windows Phone 7.5 devices will reboot and the messaging hub will not open despite repeat attempts. We have tested the attack on a range of Windows Phone devices, including HTC’s TITAN and Samsung’s Focus Flash. Some devices were running the 7740 version of Windows Phone 7.5, others were on Mango RTM build 7720. The attack is not device specific and appears to be an issue with the way the Windows Phone messaging hub handles messages. The flaw appears to affect other aspects of the Windows Phone operating system too. Both Apple and Google have suffered from SMS bugs with their iOS and Android devices. WinRumors reader Khaled Salameh discovered the flaw and reported it to us on Monday. Graylog2/graylog2-server - GitHub. Tips and downloads for getting things done.