5 Better Ways to Use Your Windows Desktop Than for Shortcuts. Advertisement. 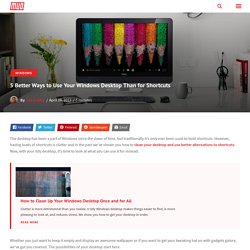 7 Tools to Manage Privacy Settings in Windows. Every Windows version has its flaws and user privacy is one that haunts them all. 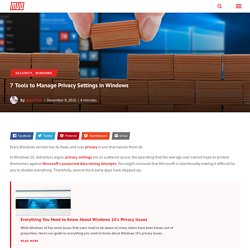 In Windows 10, detractors argue, privacy settings are so scattered across the operating that the average user cannot hope to protect themselves against Microsoft’s purported data mining attempts. You might conclude that Microsoft is intentionally making it difficult for you to disable everything. Thankfully, several third-party apps have stepped up. 13 Troubleshooting Tools to Fix Windows 10. Windows offers a variety of tools for troubleshooting and repairing problems. 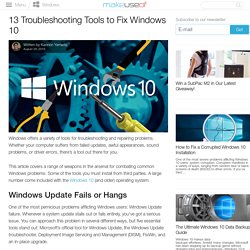 Whether your computer suffers from failed updates, awful appearances, sound problems, or driver errors, there’s a tool out there for you. This article covers a range of weapons in the arsenal for combating common Windows problems. Some of the tools you must install from third parties. A large number come included with the Windows 10 (and older) operating system. Resplendence Software - Advanced System Tools and Developer Components. Since 1997 Resplendence Software Projects has been offering advanced system tools and developer components for Microsoft Windows. 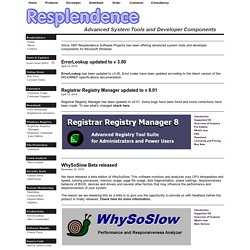 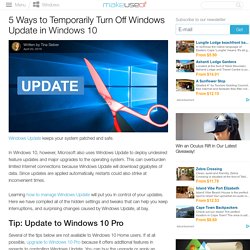 In Windows 10, however, Microsoft also uses Windows Update to deploy undesired feature updates and major upgrades to the operating system. This can overburden limited Internet connections because Windows Update will download gigabytes of data. Since updates are applied automatically, restarts could also strike at inconvenient times. 3 Free Screen Recorders to Capture Your Windows Desktop. If you’ve never used a screen recorder before, your life is about to get a whole lot easier. 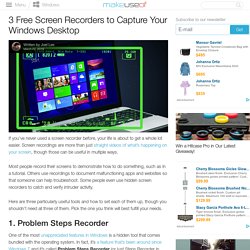 Screen recordings are more than just straight videos of what’s happening on your screen, though those can be useful in multiple ways. Most people record their screens to demonstrate how to do something, such as in a tutorial. Others use recordings to document malfunctioning apps and websites so that someone can help troubleshoot. Some people even use hidden screen recorders to catch and verify intruder activity. Here are three particularly useful tools and how to set each of them up, though you shouldn’t need all three of them. 1. One of the most unappreciated features in Windows is a hidden tool that comes bundled with the operating system. As you might be able to guess from its name, the tool is meant to make it easy for you to demonstrate the series of steps taken that lead to a specific problem, such as an error message or an application crash.

8 Fascinating Live Wallpapers for Your Windows Desktop. Using live desktop wallpaper is a great alternative to bland photos that you never get around to changing. 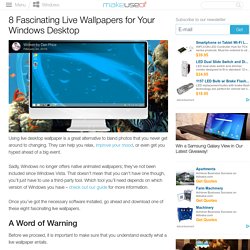 They can help you relax, improve your mood, or even get you hyped ahead of a big event. Is It Time to Replace Your Windows Laptop Battery? Do you remember the good ol’ days when your laptop used to be able to run for hours on end without needing to be plugged in? 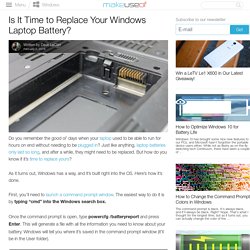 Just like anything, laptop batteries only last so long, and after a while, they might need to be replaced. But how do you know if it’s time to replace yours? As it turns out, Windows has a way, and it’s built right into the OS. Here’s how it’s done. First, you’ll need to launch a command prompt window. Once the command prompt is open, type powercfg /batteryreport and press Enter. Now, navigate to the file and open it. If there’s a big difference between the two, it means your battery has depleted over time, and you should look into purchasing a new one. How to Configure Windows 10 Privacy Settings During Setup. The Windows 10 installation is a pretty straightforward experience. 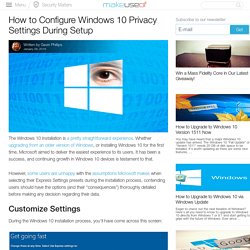 Whether upgrading from an older version of Windows, or installing Windows 10 for the first time, Microsoft aimed to deliver the easiest experience to its users. It has been a success, and continuing growth in Windows 10 devices is testament to that. However, some users are unhappy with the assumptions Microsoft makes when selecting their Express Settings presets during the installation process, contending users should have the options (and their “consequences”) thoroughly detailed before making any decision regarding their data.

How to Hide Anything in Windows. Microsoft gives you superpowers to make anything on Windows disappear. 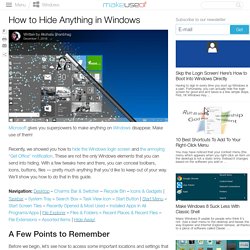 Make use of them! Recently, we showed you how to hide the Windows login screen and the annoying “Get Office” notification. These are not the only Windows elements that you can send into hiding. With a few tweaks here and there, you can conceal toolbars, icons, buttons, files — pretty much anything that you’d like to keep out of your way. We’ll show you how to do that in this guide.

Windows 8 Apps, Reviews, News, Tips. O&O ShutUp10: download free antispy tool for Windows 10. O&O ShutUp10 means you have full control over which comfort functions under Windows 10 you wish to use, and you decide when the passing on of your data goes too far. Using a very simple interface, you decide how Windows 10 should respect your privacy by deciding which unwanted functions should be deactivated. O&O ShutUp10 is entirely free and does not have to be installed – it can be simply run directly and immediately on your PC. And it will not install or download retrospectively unwanted or unnecessary software, like so many other programs do these days! Further information Portable Version – no installation required. How to Upgrade to Windows 10 & Take Settings and Apps with You. Windows 10 is coming and you have a choice to make. Either you upgrade your existing Windows installation, or you can install Windows 10 from scratch.

Here’s how to get Windows 10 without losing your favorite software and settings. Don’t Lose Anything: The Straight Upgrade. 5 Best Rescue Disks For A Windows System Restore. Advertisement Every Windows user should be aware of at least one bacon-saving, data-recovering system restore disk. If your computer starts behaving strangely, won’t boot, produces error messages or straight-up BSODs, then you’ll need access to one of these rescue discs. They help isolate and identify errors and ultimately can be the difference between managing your system error at home or a costly trip to the computer repair store. Allmyapps - The Windows PC App Store to Discover, Download and Update all your Windows Apps.

6 Modern Security Tools For Windows 8. Prefer to manage your safety on Windows 8 without accessing the desktop? Various modern apps can help you control security-related settings and tools, including data shredding tools and password managers to consoles providing access to your installed security suite. Windows 8 Modern Security: What’s The Point? Windows 8 tablets and touch-enabled hybrid devices, such as the Microsoft Surface Pro series, are just as prone to malware attacks and other threats as your desktop computer.

Meanwhile, most security-related settings and tools are still controlled via the desktop and maneuvering those menus on a tiny touch screen can be cumbersome. Fortunately, the Windows 8 store offers a wealth of security-related apps. Password Managers If you’re looking for an app to securely manage your passwords, the best place to start is with an app from a company with a good reputation, one that you can rely upon to produce a decent password storage solution. Data Shredders Does it work? Password Generation.