Radical new economic system will emerge from collapse of capitalism 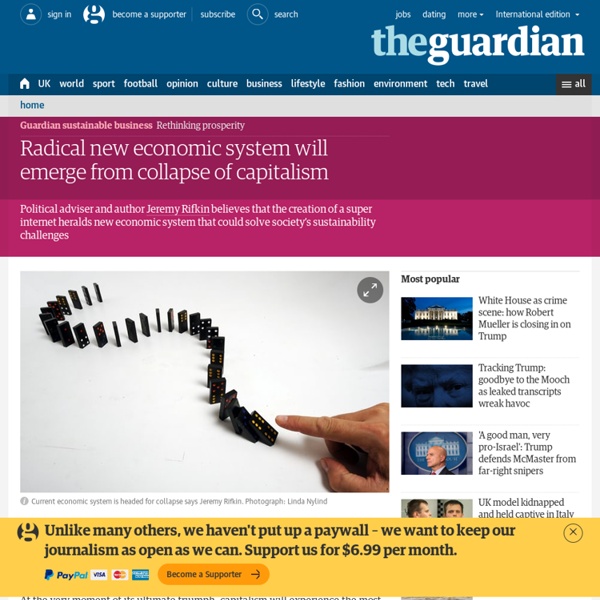 At the very moment of its ultimate triumph, capitalism will experience the most exquisite of deaths. This is the belief of political adviser and author Jeremy Rifkin, who argues the current economic system has become so successful at lowering the costs of production that it has created the very conditions for the destruction of the traditional vertically integrated corporation. Rifkin, who has advised the European Commission, the European Parliament and heads of state, including German chancellor Angela Merkel, says: No one in their wildest imagination, including economists and business people, ever imagined the possibility of a technology revolution so extreme in its productivity that it could actually reduce marginal costs to near zero, making products nearly free, abundant and absolutely no longer subject to market forces. With many manufacturing companies surviving only on razor thin margins, they will buckle under competition from small operators with virtually no fixed costs.

Best Lawyers For many years, banks have partnered with Fintech companies to offer online loans to consumers. Some of these bank partnerships have been challenged by consumer advocates through so-called “true lender” litigation in state and federal courts, by state regulators, and through criminal prosecutions. The crux of the true lender challenge is that, at the time a loan is originated, the lender on the face of the loan paper, the bank, is not the true lender. Rather, the true lender is the Fintech company that marketed and sold the financial product or service to the consumer. If a true lender challenge is successful, the Fintech company may face significant civil and criminal penalties for failing to be licensed as a lender, and the loans may be usurious and void in some jurisdictions. In the face of this threat to online lending, Fintech companies have taken different approaches.

Prizewinning Educational Games from the Nobel Foundation Marie Curie, Martin Luther King Jr, Albert Einstein, Sir Alexander Fleming, Mother Teresa; all of these amazing individuals have one thing in common – winning the Nobel Prize. The Nobel Prize is one of the most highly regarded awards given to people working in the fields of literature, medicine, physics, chemistry, peace, and economics. But the Nobel Foundation is more than just an award giving Foundation, and has branched out into creating educational content related to the hard work done by Nobel Prize winners. Not only does their website contain video clips, documentaries, literature and history related to the winners, but it has over 29 interactive educational games for students to learn about key scientific, economic, literature and peace concepts. Peace Prize Games

Sweden’s Economic Stewardship Overturns Conventional Wisdom High taxes, strong unions and an equal distribution of wealth. That’s the recipe for success in a globalized world, according to Magdalena Andersson, the Social Democratic economist who’s also Sweden’s finance minister. The 50-year-old has been raising taxes and spending more on welfare since winning power in 2014. She’s also overseen an economic boom, with Swedish growth rates topping 4 percent early last year, that has turned budget deficits into surpluses. In a world still flinching from the financial crisis that hit a decade ago and the populist wave that followed, Sweden’s economic stewardship holds lessons that challenge the conventional wisdom in the U.S. on how taxes work, according to the Harvard-educated minister.

Capitalism Is Not the Only Choice by Penn Loh Since the breakup of the Soviet bloc and China’s turn toward free markets, many economists have pronounced an “end of history,” where capitalism reigns supreme as the ultimate form of economy. Perhaps “there is no alternative” to a globalized neoliberal economy, as former British Prime Minister Margaret Thatcher often said. Indeed, free markets in which individuals compete to get what they can while they can are glorified in popular culture through reality shows such as Shark Tank. But many of us in the 99 percent are not feeling so happy or secure about this economy’s results. Many are working harder and longer just to maintain housing and keep food on the table. Even the college-educated are mired in student debt, keeping the American Dream beyond their grasp.

Ian Livingstone applies to create 'gaming' school 9 October 2014Last updated at 10:20 ET By Dave Lee Technology reporter, BBC News Ian Livingstone is known to some as "father" of Tomb Raider Lara Croft British games industry veteran Ian Livingstone has formally applied to launch a free school with lessons built using video gaming. Mr Livingstone told the BBC he wanted to use games-based learning rather than relying on "relentless testing". "I'm passionate about children who have been born into the internet. I think they learn in a different way."

Complexity Economics Shows Us Why Laissez-Faire Economics Always Fails By Eric Liu and Nick Hanauer During 2007 and 2008, giant financial institutions were obliterated, the net worth of most Americans collapsed, and most of the world’s economies were brought to their knees. At the same time, this has been an era of radical economic inequality, at levels not seen since 1929. Over the last three decades, an unprecedented consolidation and concentration of earning power and wealth has made the top 1 percent of Americans immensely richer while middleclass Americans have been increasingly impoverished. Canadian province trials basic income for thousands of residents Canada is testing a basic income to discover what impact the policy has on unemployed people and those on low incomes. The province of Ontario is planning to give 4,000 citizens thousands of dollars a month and assess how it affects their health, wellbeing, earnings and productivity. It is among a number of regions and countries across the globe that are now piloting the scheme, which sees residents given a certain amount of money each month regardless of whether or not they are in work.

All Fun & Games? Understanding Learner Outcomes Through Educational Games Over the past several years, there has been tremendous interest among educators in the use of digital games as serious learning. Advocates of game-based learning for K-12 students cite the value of digital games to teach and reinforce skills that prepare students for college and career, such as collaboration, problem solving, creativity, and communication. Not as often discussed is our ability to use students' in-game actions as evidence for the assessment of skills and knowledge, including those not easily measured by traditional multiple-choice tests. The Potential of Games as Invisible Assessments Traditional assessment methods often require teachers to interrupt classroom learning and administer tests.

Old Economics Based on False ‘Laws of Physics’ Things are not going well in the world’s richest economies. Most OECD countries are facing their highest levels of income inequality in 30 years, while generating ecological footprints of a size that would require four, five or six planet Earths if every country were to follow suit. These economies have, in essence, become divisive and degenerative by default. Mainstream economic theory long promised that the solution starts with growth – but why does that theory seem so ill-equipped to deal with the social and ecological fallout of its own prescriptions? The answer can be traced back to a severe case of physics envy.

The economics of our future world Taking of moving from the concept of a Universal Basic Income to money without government to tokens to credits, I’ve been reading a fascinating book recently on Star Trek’s economics called Trekonomics. Released in 2016, I thought it would be some frivolous Trekkie’s drooling over the wonder of the Federation’s Galaxies but, instead, it is actually a pretty fundamental analysis of the possible economics of the future. I really enjoyed it and realised why I’m such a fan of Star Trek which is, fundamentally, that it portrays a Utopian vision of the future rather than a Dystopian vision.

How to Plan Instruction Using the Video Game Model Imagine you are placed in the following scenarios: You are dropped off at the top of a ski resort's steepest run when you've only had experience on the beginner slopes. You have to spend your day on the bunny hill when you're an expert skier. Building More Homes will not Solve Britain [or NZ’s] Housing Crisis Everyone – from the government, to housing charities, to housebuilders – has bought into the conventional wisdom that the dysfunction that racks our housing market is a matter of demand and supply. We’re not building enough houses, so house prices have been sent rocketing, taking home-ownership out of reach for growing numbers of young people. But in reality, our housing problems are not a simple feature of supply and demand. Rather, our housing market has a bitcoin problem.