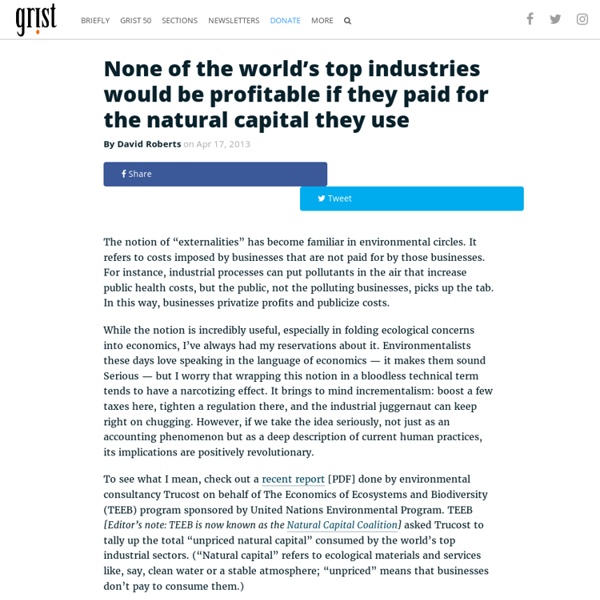 The notion of “externalities” has become familiar in environmental circles. It refers to costs imposed by businesses that are not paid for by those businesses. For instance, industrial processes can put pollutants in the air that increase public health costs, but the public, not the polluting businesses, picks up the tab. In this way, businesses privatize profits and publicize costs. While the notion is incredibly useful, especially in folding ecological concerns into economics, I’ve always had my reservations about it. Environmentalists these days love speaking in the language of economics — it makes them sound Serious — but I worry that wrapping this notion in a bloodless technical term tends to have a narcotizing effect. To see what I mean, check out a recent report [PDF] done by environmental consultancy Trucost on behalf of The Economics of Ecosystems and Biodiversity (TEEB) program sponsored by United Nations Environmental Program. Here’s how those costs break down:

Black Friday is Buy Nothing Day (Here are 10 Films to Spread the Shopping-Free Cheer!) By Tim Hjersted Since 1997, the biggest shopping day of the year in North America has also been known as Buy Nothing Day - a playful protest against the cultural and commercial pressures that compel us to consume more every year, grow more in debt to prove our love to our loved ones and find temporary happiness in that euphoric moment of purchase. It's a movement that has been growing internationally every year, despite the commercial pressures now enveloping even Thanksgiving in the holiday madness. More and more people have had enough and are choosing to celebrate with their loved ones a different way - by not buying anything! In the spirit of the shopping-free holiday, here are 10 of the best documentaries that give inspiration to the day (click the links to watch online): Explore more films on consumerism here.

Václav Havel’s Lessons on How to Create a “Parallel Polis” The recent political earthquakes have found us intellectually and emotionally underprepared, even helpless. None of our usual categories (left, right, liberal, conservative, progressive, reactionary) and perspectives (class, race, gender) seem able to explain how a compulsive liar and serial groper became the world’s most powerful man. Turning away from this unintelligible disaster, many seek enlightenment in literary and philosophical texts from the past, such as Hannah Arendt’s “The Origins of Totalitarianism,” George Orwell’s “1984,” and Sinclair Lewis’s “It Can’t Happen Here.” It may be more rewarding, however, to turn to Václav Havel: a writer and thinker who intimately experienced totalitarianism of the Orwellian kind, who believed that it had already happened in America, and who also offered a way to resist it.

Our Capitalist Society Has Managed to Create “Bullsh*t Jobs” Abundant, paid work might be an old-world way of measuring prosperity. After all, many manufacturing jobs are being taken over by bots, leaving those without computer science or relevant degrees in the dust, without work. Chris Twomey, policy director of the non-profit organization Western Australian Council of Social Service, argues we shouldn’t be trying to create more jobs; instead, we should be working less. 'Find a new way to tell the story' - how the Guardian launched its climate change campaign Climate change is the biggest threat to humanity. Yet journalism has struggled for two decades to tell a story that doesn’t leave the public feeling disheartened and disengaged. This podcast series lets you behind the scenes as the Guardian’s editor-in-chief, Alan Rusbridger, and team set out to find a new narrative. Recording as we go, you’ll hear what works, as well as our mistakes.

Global emissions stall in 2014 following slowdown in China's economy A slowdown in China’s economic growth helped the world to a pause in the upward rise in greenhouse gas emissions last year, according to data released on Friday. China burnt less coal last year than expected, as the projected rise in its energy demand faltered along with the rise in its economic growth, and as the expansion of its renewable energy generation continued. Emissions of carbon dioxide related to energy use were flat in 2014, compared with the previous year, the International Energy Agency (IEA) said on Friday. The World Without Forms – GODS & RADICALS I said to a friend, we see the darkness, and some go in. It is the Abyss. We have to find out what is there, to find out if there is meaning.

The 9 limits of our planet … and how we’ve raced past 4 of them Johan Rockström says humanity has already raced past four of the nine boundaries keeping our planet hospitable to modern life. Writer John Carey digs into the “planetary boundary” theory — and why Rockström says his isn’t, actually, a doomsday message.We’ve been lucky, we humans: For many millennia, we’ve been on a pretty stable — and resilient — planet. As our civilizations developed, we’ve transformed the landscape by cutting down forests and growing crops. We’ve created pollution, and driven plants and animals extinct. Yet our planet has kept spinning along, supporting us, more or less stable and in balance. Going forward, scientists have recently proposed, all we need to do is stay within some limits, nine upper boundaries for bad behavior.

America once fought a war against poverty – now it wages a war on the poor In 2013, Callie Greer’s daughter Venus died in her arms after a battle with breast cancer. If caught early, the five-year survival rate for women diagnosed with breast cancer is close to 100%. But Venus’s cancer went undiagnosed for months because she couldn’t afford health insurance. She lived in Alabama, a state that refused to expand Medicaid under the Affordable Care Act.