'The goal is to automate us': welcome to the age of surveillance capitalism 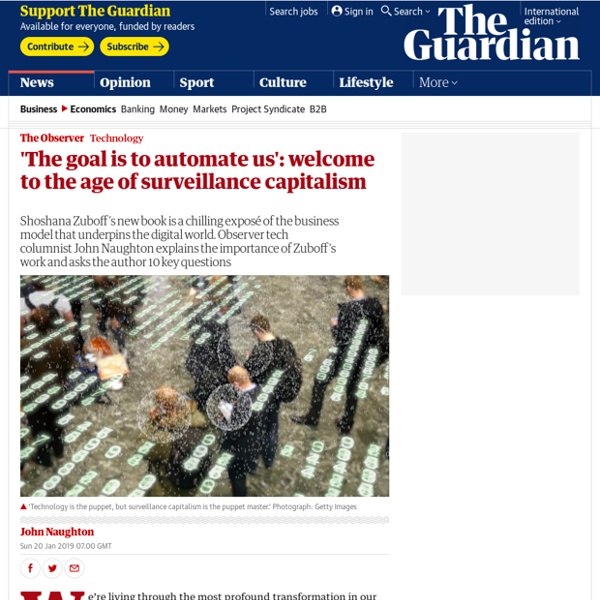 We’re living through the most profound transformation in our information environment since Johannes Gutenberg’s invention of printing in circa 1439. And the problem with living through a revolution is that it’s impossible to take the long view of what’s happening. Hindsight is the only exact science in this business, and in that long run we’re all dead. Printing shaped and transformed societies over the next four centuries, but nobody in Mainz (Gutenberg’s home town) in, say, 1495 could have known that his technology would (among other things): fuel the Reformation and undermine the authority of the mighty Catholic church; enable the rise of what we now recognise as modern science; create unheard-of professions and industries; change the shape of our brains; and even recalibrate our conceptions of childhood. And yet printing did all this and more. Why choose 1495? That’s not for want of trying, mind. Which is why the arrival of Shoshana Zuboff’s new book is such a big event.

It’s not that we’ve failed to rein in Facebook and Google. We’ve not even tried In a BBC interview last week, Facebook’s vice-president, Nick Clegg, surprised viewers by calling for new “rules of the road” on privacy, data collection and other company practices that have attracted heavy criticism during the past year. “It’s not for private companies … to come up with those rules,” he insisted. “It is for democratic politicians in the democratic world to do so.” Facebook’s response would be to adopt a “mature role”, not “shunning” but “advocating” the new rules. For a company that has fiercely resisted new laws, Clegg’s message aimed to persuade us that the page had turned. Yet his remarks sounded like Newspeak, as if to obscure ugly facts.

The Great Battle of Fire and Light — Wait But Why Note: This is the second post in the series. The first one is here. There is a great deal of human nature in people. – Mark Twain The animal world is a stressful place to be. The problem is that the animal world isn’t really an animal world—it’s a world of trillions of strands of genetic information, each one hell-bent on immortality. David Attenborough Netflix documentary: Australian scientists break down in tears over climate crisis One of Australia’s leading coral reef scientists is seen breaking down in tears at the decline of the Great Barrier Reef during a new Sir David Attenborough documentary to be released globally on Friday evening. Prof Terry Hughes is recounting three coral bleaching monitoring missions in 2016, 2017 and 2020 when he says: “It’s a job I hoped I would never have to do because it’s actually very confronting …” before tears cut him short. The emotional scene comes during the new Netflix documentary, Breaking Boundaries: The Science of Our Planet, and shows the toll the demise of the planet’s natural places is having on some of the people who study them.

Scientists Are Beginning To Figure Out Why Conservatives Are…Conservative Scientists are using eye-tracking devices to detect automatic response differences between liberals and conservatives.University of Nebraska-Lincoln You could be forgiven for not having browsed yet through the latest issue of the journal Behavioral and Brain Sciences. If you care about politics, though, you'll find a punchline therein that is pretty extraordinary. Click here to read more from Mooney on the science of why people don't believe in science. Behavioral and Brain Sciences employs a rather unique practice called "Open Peer Commentary": An article of major significance is published, a large number of fellow scholars comment on it, and then the original author responds to all of them.

Why Do You Have to Pee the Closer You Get to a Bathroom? - Shape Magazine You know that terrible "gotta go" feeling that seems to get stronger and stronger the closer you get to your front door? You're fumbling for your keys, ready to toss your bag on the floor and make run for the bathroom. It's not all in your head-it's a real thing called latchkey incontinence.

The Artificial Intelligence Revolution: Part 1 PDF: We made a fancy PDF of this post for printing and offline viewing. Buy it here. (Or see a preview.) Note: The reason this post took three weeks to finish is that as I dug into research on Artificial Intelligence, I could not believe what I was reading. It hit me pretty quickly that what’s happening in the world of AI is not just an important topic, but by far THE most important topic for our future. So I wanted to learn as much as I could about it, and once I did that, I wanted to make sure I wrote a post that really explained this whole situation and why it matters so much. I grew up in an off-the-grid Christian commune. Here's what I know about America's religious beliefs The only time I saw Brother Sam in person, he was marching like a soldier as he preached, with sweat running like tears from his temples and the Bible a heavy brick in his right hand. It was 1978, I was five, and my family had traveled to Lubbock, Texas, for a Body Convention, which was what we called the semi-annual gatherings of hundreds, sometimes thousands, of members of The Body, or Body of Christ, an expansive network of charismatic communities created almost singlehandedly by Brother Sam. My family lived on a Body Farm, a mostly off-grid outpost on the northern shore of Lake Superior, where I grew up singing, clapping, hollering and dancing in the Tabernacle aisles as shamelessly as King David.

Neoliberalism must be pronounced dead and buried. Where next? What kind of economic system is most conducive to human wellbeing? That question has come to define the current era, because, after 40 years of neoliberalism in the United States and other advanced economies, we know what doesn’t work. The neoliberal experiment – lower taxes on the rich, deregulation of labour and product markets, financialisation, and globalisation – has been a spectacular failure. Growth is lower than it was in the quarter-century after the second world war, and most of it has accrued to the very top of the income scale.

Why Love Hurts: The Sociology of How Our Institutions Rather Than Our Personal Psychological Failings Shape the Romantic Agony of Modern Life “There is hardly any activity, any enterprise, which is started with such tremendous hopes and expectations, and yet, which fails so regularly, as love,” philosopher Erich Fromm wrote in his foundational 1956 inquiry into what is keeping us from mastering the art of loving. But why is it, really, that frustration is indelible to satisfaction in romance? At least since Jacques Ferrand’s 17th-century treatise on lovesickness, scholars have attempted to shed light on the phenomenon that has inspired the vast majority of art, music, and literature since humanity’s dawn — the pain of love. Although unrequited love and the anguish of longing have a perennial place in our experience of romantic pain, Illouz is concerned with the pain that lives within actualized romantic relationships.

Ten weird tricks for resisting surveillance capitalism in and through the classroom . . . next term! Greetings, educators! Are you watching in sheer terror as BigTech's four horsemen Surveillance, Exploitation, Manipulation, and Cataclysmic Hubris gallop wildly down the information superhighway, downloading their user-friendly death and destruction as far as the eye can see?* Do you stay up at night wondering if the real AI will just be us in two years because we'll be the blue-toothed, chip-injected, face-recognized meatbots churning wealth out of smart cities for the 1% tech tyrants who have already long stopped allowing their children to use their products? Are you concerned that your students don't understand the significance of these issues, don't care, or can't care because they feel powerless to stop it? Have you, good teacher of future citizens, (including lawyers, politicians, tech workers and tech users), looked for the lesson on stopping it and found it simply not there?

Broccoli Is Dying. Corn Is Toxic. Long Live Microbiomes! Editor’s Note (9/3/2019): This post has been substantially rewritten to change or eliminate claims and sourcing that did not meet Scientific American’s editorial standards. The revised post can be found here. As food writer Mark Bittman recently remarked, since food is defined as “a substance that provides nutrition and promotes growth” and poison is “a substance that promotes illness,” then “much of what is produced by industrial agriculture is, quite literally, not food but poison.” Of course, it doesn’t have to be this way.