On the Phenomenon of Bullshit Jobs - STRIKE! 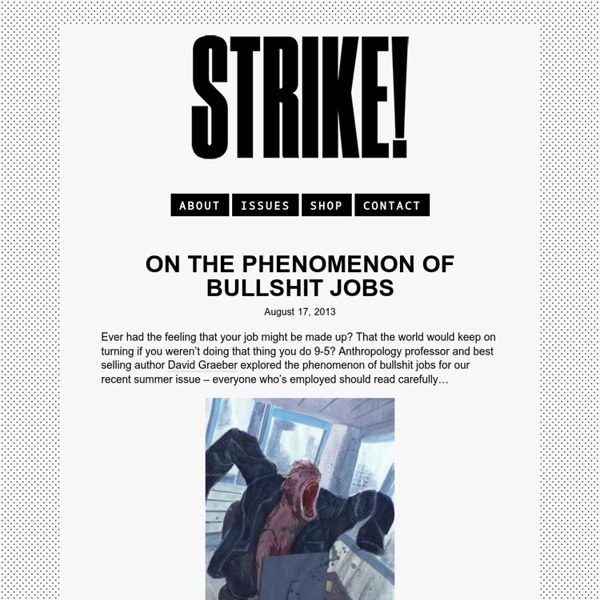 Ever had the feeling that your job might be made up? That the world would keep on turning if you weren’t doing that thing you do 9-5? Anthropology professor and best selling author David Graeber explored the phenomenon of bullshit jobs for our recent summer issue – everyone who’s employed should read carefully… On the Phenomenon of Bullshit Jobs by David Graeber. In the year 1930, John Maynard Keynes predicted that technology would have advanced sufficiently by century’s end that countries like Great Britain or the United States would achieve a 15-hour work week. There’s every reason to believe he was right. Why did Keynes’ promised utopia – still being eagerly awaited in the ‘60s – never materialise? So what are these new jobs, precisely? These are what I propose to call “bullshit jobs.” It’s as if someone were out there making up pointless jobs just for the sake of keeping us all working. The answer clearly isn’t economic: it’s moral and political.

Butterflies Remember What They Learned as Caterpillars When a caterpillar turns into a butterfly, the transformation is so radical that it’s hard to believe they belong to the same species. But regardless of the new wings and body, the new diet and airborne lifestyle, butterflies remember what they learned as babies. In a study published yesterday in Public Library of Science ONE, Georgetown University biologists gave mild shocks to tobacco hornworm caterpillars while exposing the caterpillars to particular odors.

'The goal is to automate us': welcome to the age of surveillance capitalism We’re living through the most profound transformation in our information environment since Johannes Gutenberg’s invention of printing in circa 1439. And the problem with living through a revolution is that it’s impossible to take the long view of what’s happening. Hindsight is the only exact science in this business, and in that long run we’re all dead. Printing shaped and transformed societies over the next four centuries, but nobody in Mainz (Gutenberg’s home town) in, say, 1495 could have known that his technology would (among other things): fuel the Reformation and undermine the authority of the mighty Catholic church; enable the rise of what we now recognise as modern science; create unheard-of professions and industries; change the shape of our brains; and even recalibrate our conceptions of childhood.

10 Bizarre Food Developments We May See In The Future Food Man has always striven to expand his knowledge and the study of food is no exception. Our current technology has enabled us to push the boundaries of food development further than ever before, and the entries on this list are just some of what we might see in the future. 10Headless Chicken Farms In 2012, Andre Ford, an architecture student at the UK Royal College Of Art, looked at the problems presently plaguing the broiler chicken industry and proposed the Center For Unconscious Farming as a solution. Scientists Are Beginning To Figure Out Why Conservatives Are…Conservative Scientists are using eye-tracking devices to detect automatic response differences between liberals and conservatives.University of Nebraska-Lincoln You could be forgiven for not having browsed yet through the latest issue of the journal Behavioral and Brain Sciences. If you care about politics, though, you'll find a punchline therein that is pretty extraordinary.

10 Lesser Known or Used Forms of Government Politics The readership of the List Universe is varied, and many of us come from government systems that are quite different from others. While they may be foreign to us, we are familiar with the concepts used in other nations. This list looks at 10 forms of government that are not very well known or have been seldom seen (which is a blessing in the case of some of them). Totalitarianism Total Rule Neoliberalism must be pronounced dead and buried. Where next? What kind of economic system is most conducive to human wellbeing? That question has come to define the current era, because, after 40 years of neoliberalism in the United States and other advanced economies, we know what doesn’t work. The neoliberal experiment – lower taxes on the rich, deregulation of labour and product markets, financialisation, and globalisation – has been a spectacular failure. Growth is lower than it was in the quarter-century after the second world war, and most of it has accrued to the very top of the income scale. After decades of stagnant or even falling incomes for those below them, neoliberalism must be pronounced dead and buried. Vying to succeed it are at least three major political alternatives: far-right nationalism, centre-left reformism and the progressive left (with the centre-right representing the neoliberal failure).

Laughter in animals Laughter in animals other than humans describes animal behavior which resembles human laughter. Numerous species demonstrate vocalizations similar to human laughter. A significant proportion of these are mammals, including non-human primates, which suggests that the neurological functions involved in expressing cheer occurred early in the process of mammalian evolution. [1] Sullivan: Why the Reactionary Right Must Be Taken Seriously Look around you. Donald Trump is now president of the United States, having won on a campaign that trashed liberal democracy itself, and is now presiding over an administration staffed, in part, with adherents of a political philosophy largely alien to mainstream American politics. In Russia, Vladimir Putin has driven his country from postcommunist capitalism to a new and popular czardom, empowered by nationalism and blessed by a resurgent Orthodox Church. Britain, where the idea of free trade was born, is withdrawing from the largest free market on the planet because of fears that national identity and sovereignty are under threat.

Why the modern bathroom is a wasteful, unhealthy design For centuries, the people of London and other big cities got their cooking and washing water from rivers or wells, limiting their consumption to pretty much what they could carry. They dumped their waste into brick-lined cesspits that would be emptied by the night soil men, who sold it as fertilizer or dumped it off Dung Pier into the Thames. Liquid waste might be thrown into gutters in the middle of the road. In 1854, in the middle of a cholera epidemic in London, Dr John Snow mapped where victims died and found that the deaths seemed concentrated around one of those pumps, at 37 Broad Street.

American Kakistocracy – Thaddeus Howze – Medium Kakistocracy: is a term meaning a state or country run by the worst, least qualified, or most unscrupulous citizens. A rarely seen word you should familiarize yourself with. Likely to become the word used to describe this particular presidency in the future. Previous contenders include: Plutocracy — rule by the wealthy, kleptocracy — rule by the crooked or those involved in criminal activity, or oligarchy — a small group of people having control of a country, organization, or institution.