Neoliberals are yet another group of individuals which believe to infallibly be in possession of the truth. What they have recognized as being the truth, is essentially a matter of competition, power and profit.

In pursuit of their aims, they think they have the privilege to act without compliance with laws and ethical considerations. The core of this ideology is the belief that a tiny minority of super riches can dominate the masses at will, if those are out of funds. EPL Presents Chris Hedges. Neoliberalism – the ideology at the root of all our problems. Imagine if the people of the Soviet Union had never heard of communism. 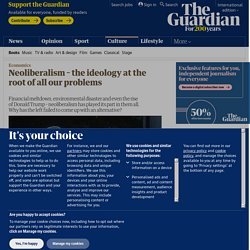 The ideology that dominates our lives has, for most of us, no name. Mention it in conversation and you’ll be rewarded with a shrug. Even if your listeners have heard the term before, they will struggle to define it. Neoliberalism: do you know what it is? Its anonymity is both a symptom and cause of its power. So pervasive has neoliberalism become that we seldom even recognise it as an ideology. Neoliberalism sees competition as the defining characteristic of human relations. Attempts to limit competition are treated as inimical to liberty. We internalise and reproduce its creeds. Never mind structural unemployment: if you don’t have a job it’s because you are unenterprising. Among the results, as Paul Verhaeghe documents in his book What About Me? The term neoliberalism was coined at a meeting in Paris in 1938. 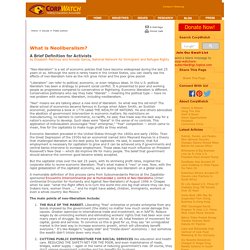 Although the word is rarely heard in the United States, you can clearly see the effects of neo-liberalism here as the rich grow richer and the poor grow poorer. "Liberalism" can refer to political, economic, or even religious ideas. In the U.S. political liberalism has been a strategy to prevent social conflict. It is presented to poor and working people as progressive compared to conservative or Rightwing. Economic liberalism is different. "Neo" means we are talking about a new kind of liberalism. The Strange Non-Death of Neoliberalism, by Colin Crouch. An Economist examines the puzzling and tenacious hold of Neo-Liberalism on the public mind It all began, perhaps unfairly, with Austrian economist Friedrich von Hayek | Photo: Wikicommons. 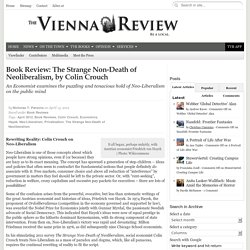 Ménage à Trois. The Strange Non-Death of Neoliberalism. Colin Crouch urges us to rethink the role of giant corporations in the state vs market analysis of neoliberalism Neoliberalism has ruled the Western world and most of the globe since the 1970’s. It is based on a market-driven approach to monetary policy and it promotes control of the economy by the private sector, which is supposedly more efficient than the public sector. For many, the recent financial collapse provided a strong blow to neoliberal economic theories.

The Cracks Begin To Show in The UK Economy (1/2) Bio John Weeks is a professor emeritus of the University of London's School of Oriental and African Studies and author of Economics of the 1%: How Mainstream Economics Serves the Rich, Obscures Reality and Distorts Policy. 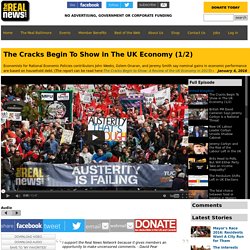 A Brief Examination of Neoliberalism and Its Consequences - Sociology Lens. Starting in the second half of the 20th century, neoliberalism became increasingly prominent as a form of governance in countries around the world (Peters 2001). 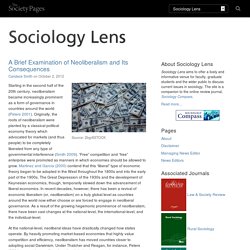 Originally, the roots of neoliberalism were planted by a classical political economy theory which advocated for markets (and thus people) to be completely liberated from any type of governmental interference (Smith 2009). “Free” competition and “free” enterprise were promoted as manners in which economies should be allowed to grow. Martinez and García (2000) contend that this “liberal” type of economic theory began to be adopted in the West throughout the 1800s and into the early part of the 1900s. The Great Depression of the 1930s and the development of Keynesian economics, though, temporarily slowed down the advancement of liberal economics. At the national-level, neoliberal ideas have drastically changed how states operate. Further Reading: Bandelj, Nina, Kristen Shorette, and Elizabeth Sowers. 2011. George, Susan. 1999. Eine Million Jobverluste in Deutschland? Zur Diskussion über die Beschäftigungseffekte von Mindestlöhnen  22. 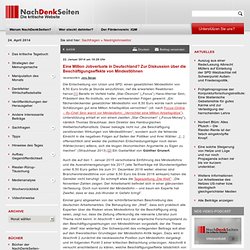 Builder Sir Robert McAlpine denies keeping blacklist. The construction company Sir Robert McAlpine has admitted to a high court judge before a hearing this week that a database of names and information held on workers over decades helped it "keep an eye" on individuals, but it denies that the data amounted to an employment blacklist. 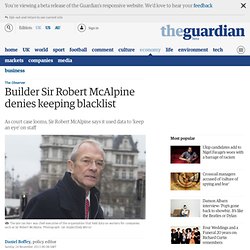 The firm, which along with others allegedly used the store of information to keep 3,300 workers out of the industry, says that where negative information was held, it was merely used to help the company keep an eye out for future dangerous or unlawful activity. The Volkswagen emissions scandal explained. Walmart employee fired for redeeming $2 of cans finds groundswell of support. An Albany-area Walmart employee fired from his job for redeeming $2 worth of cans he collected while gathering shopping carts in the store’s parking lot has drawn widespread sympathy and support on social media. 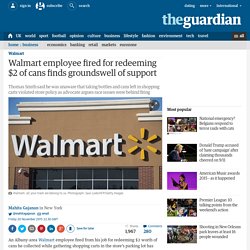 Thomas Smith, 52, told the Albany Times Union that he was fired in early November for redeeming a total of $5.10 worth of cans and bottles on two occasions, and said he was unaware that doing so violated store policy. Support for Smith grew after a story on his termination from the Albany Times Union. A GoFundMe drive for Smith set up by Dounya Hamdan, of Chicago, has nearly reached the $5,000 goal as of Friday afternoon. On the day he was fired, Smith, a formerly homeless ex-convict who has a learning disability, had stayed three hours past the normal end of his shift, having agreed to work extra time on a day when the East Greenbush, New York, store was short-staffed.

“I didn’t know you couldn’t take empties left behind. VW admits emissions scandal was caused by 'whole chain' of failures. Timeline: Barclays' widening Libor-fixing scandal. 6 February 2013Last updated at 11:51 Libor, the London inter-bank lending rate, is considered to be one of the most crucial interest rates in finance. 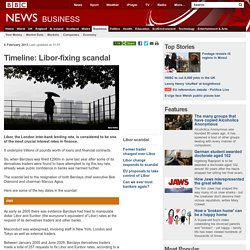 It underpins trillions of pounds worth of loans and financial contracts. So, when Barclays was fined £290m in June last year after some of its derivatives traders were found to have attempted to rig this key rate, already weak public confidence in banks was harmed further. The scandal led to the resignation of both Barclays chief executive Bob Diamond and chairman Marcus Agius.

Here are some of the key dates in the scandal: As early as 2005 there was evidence Barclays had tried to manipulate dollar Libor and Euribor (the eurozone's equivalent of Libor) rates at the request of its derivatives traders and other banks. Misconduct was widespread, involving staff in New York, London and Tokyo as well as external traders. The Scam Wall Street Learned From the Mafia. The Ideological Crisis of Western Capitalism - Joseph E. Stiglitz. Exit from comment view mode. 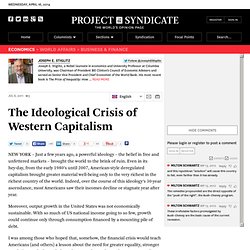 Click to hide this space. How Did Economists Get It So Wrong? Our Economic Ruin Means Freedom for the Super-Rich by George Monbiot. The model is dead; long live the model. Austerity programmes are extending the crises they were meant to solve, yet governments refuse to abandon them. The United Kingdom provides a powerful example. The cuts, the coalition promised, would hurt but work. Conservative fantasies on the miracles of market. Austin, TX - A central doctrine of evangelicals for the "free market" is its capacity for innovation: New ideas, new technologies, new gadgets - all flow not from governments, but from individuals and businesses, allowed to flourish in the market, we are told.

That's the claim made in a recent op-ed in our local paper by policy analyst Josiah Neeley of the Texas Public Policy Foundation, a conservative think-tank in Austin. His conclusion: "Throughout history, technological advances have been driven by private investment, not by government fiat. There is no reason to expect that to change anytime soon. " How The Bush Tax Cuts Blew Up The Deficit And Debt‬‏ Debt deal: anger and deceit has led the US into a billionaires' coup. There are two ways of cutting a deficit: raising taxes or reducing spending. Raising taxes means taking money from the rich. Cutting spending means taking money from the poor. Neo-liberal capture of the policy making process in Europe.

Mainstream macroeconomics has mounted a range of arguments over the years to argue against any discretionary involvement by governments or regulators in the economy. The claim is always that the ‘market’ will self regulate and weed out bad players and produce the best outcomes with the least resources each period of activity. Various fancy terms are introduced into textbooks that make these arguments seem to have scientific weight. In narratives, there is often claims that left-wing groups blurred as trade unions have too much influence on political processes, particularly when a non-conservative party is in power. Rarely, is there any discussion of the way governments (of all political persuasions) become captured by the financial and industrial capitalist elites and become meagre conduits for capitalist rule. ALTER-EU was formed in 2005. Corporate power has turned Britain into a corrupt state. If you're under attack, create a diversion.

U.S. Profits Per Employee Jump As Raises Remain Modest: Study. Companies are squeezing greater profits out of their employees, even as layoffs rise and the outlook for hiring and raises remains mixed, a recent study has found. Profits per employee have gone up for the second year in a row, according to a study by the financial analysis company Sageworks, suggesting that companies continue to get more out of their employees as they slash their payrolls in an effort to get leaner. The findings also suggest that profits have been rising despite the lack of a corresponding increase in wages. The private companies surveyed by Sageworks reported that their profits per employee climbed to $15,278.72 in 2011 from $12,488.02 in 2010, a rise of about 22 percent for the year.

The use of austerity.

Why are we debating cuts to Social Security? - Opinion. Wage slavery. Wage slavery refers to a situation where a person's livelihood depends on wages or a salary, especially when the dependence is total and immediate.[1][2] Up to 13,000 working as slaves in UK. As many as 13,000 people in Britain are victims of slavery, about four times the number previously thought, analysis for the government has found. Britain's Modern Slave Trade - Al Jazeera English. Executive Excess 2011: The Massive CEO Rewards for Tax Dodging. Guns don’t kill people, the old saw goes.