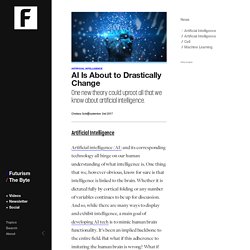 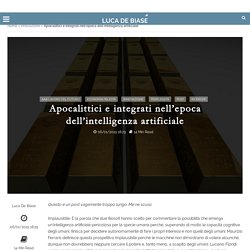 Applying AI for social good. Artificial intelligence (AI) has the potential to help tackle some of the world’s most challenging social problems. 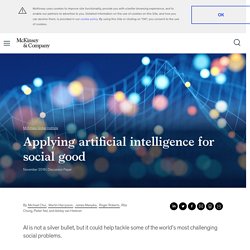 To analyze potential applications for social good, we compiled a library of about 160 AI social-impact use cases. They suggest that existing capabilities could contribute to tackling cases across all 17 of the UN’s sustainable-development goals, potentially helping hundreds of millions of people in both advanced and emerging countries. Edp landscaping insight report n4 2018. Reporting with a cyber risk dashboard. Comprehensive dashboards can accurately identify, size, and prioritize cyberthreats for treatment. 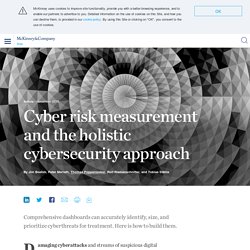 Here is how to build them. Damaging cyberattacks and streams of suspicious digital communications have made cybersecurity a top concern of the world’s business leaders. So say the overwhelming majority of responding board members in a recent McKinsey survey. Their answers are further evidence that cyber risk is now as important a priority for the leaders of public and private institutions as financial and legal risks.

€100-billion budget proposed for Europe’s next big research programme. The European Union is planning to spend €100 billion (US$120 billion) on its next major research-funding programme, for 2021 to 2027 — a disappointment to some scientists and policy groups who were hoping for up to 60% more. 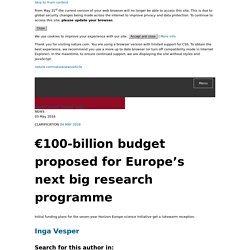 The budget does not include a contribution from the United Kingdom, whose departure from the bloc in 2019 is likely to shake up the distribution of funds among the remaining 27 EU countries. The European Commission issued its opening budget proposal for Framework Programme Nine — newly named Horizon Europe, and the successor to the current programme, Horizon 2020 — on 2 May. The announcement marks the start of tough negotiations between the European Parliament and the Council of the European Union, which comprises government representatives from EU nations.

The proposed €100 billion, which includes €2.4 billion for the Euratom nuclear-research programme, is an increase on the €77-billion pot for Horizon 2020, which began in 2014 (see ‘Europe’s science spending’). Where is technology taking the economy? We are creating an intelligence that is external to humans and housed in the virtual economy. 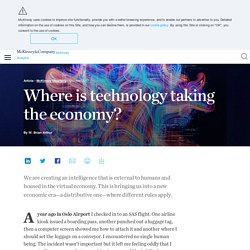 This is bringing us into a new economic era—a distributive one—where different rules apply. A year ago in Oslo Airport I checked in to an SAS flight. One airline kiosk issued a boarding pass, another punched out a luggage tag, then a computer screen showed me how to attach it and another where I should set the luggage on a conveyor. I encountered no single human being. Whats now and next in analytics ai and automation. Trend & lncertezza. The real-world potential and limitations of artificial intelligence. Artificial intelligence has the potential to create trillions of dollars of value across the economy—if business leaders work to understand what AI can and cannot do. 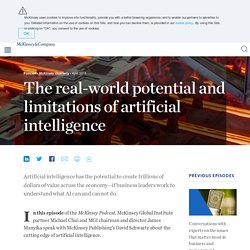 Notes from the frontier Modeling the impact of AI on the world economy. MGI Solving the Productivity Puzzle Report February 22 2018. MAIZE. — An analysis of our debut event on AI, the technology that walks the fine line between a world of wonder and one of woe. 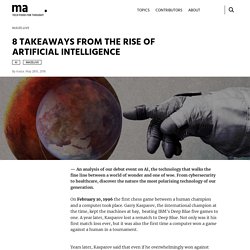 From cybersecurity to healthcare, discover the nature the most polarising technology of our generation. On February 10, 1996 the first chess game between a human champion and a computer took place. Garry Kasparov, the international champion at the time, kept the machines at bay, beating IBM’s Deep Blue five games to one. A year later, Kasparov lost a rematch to Deep Blue. Not only was it his first match loss ever, but it was also the first time a computer won a game against a human in a tournament.

Years later, Kasparov said that even if he overwhelmingly won against Deep Blue in 1996, he understood that something was changing. Intelligenzaartificiale.it Reti neurali. Intelligenza artificiale, Italia avanti adagio: trainano banche e assicurazioni - CorCom. How to build a data-first culture for a digital transformation. Getting better data is key to eliminating the unknowns of a digital transformation. 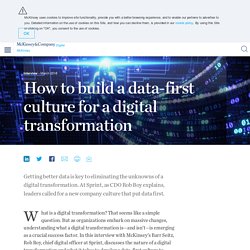 At Sprint, as CDO Rob Roy explains, leaders called for a new company culture that put data first. What is a digital transformation? That seems like a simple question. But as organizations embark on massive changes, understanding what a digital transformation is—and isn’t—is emerging as a crucial success factor. How artificial intelligence and data add value to businesses.

Artificial intelligence will transform many companies and create completely new types of businesses. The cofounder of Coursera, AI Fund, and Landing.AI shares how businesses can benefit. Artificial intelligence (AI) is at the cutting edge of innovation. European Innovation Scoreboard e lItalia. Int Art Casal. Embracing Digital Technology. About the Authors: Michael Fitzgerald is the Digital Transformation contributing editor at MIT Sloan Management Review, covering the challenges that traditional companies face as they adopt emerging technologies. He can be reached at michael@mffitzgerald.com. Nina Kruschwitz is managing editor and special projects manager of MIT Sloan Management Review which brings ideas from the world of thinkers to the executives and managers who use them. She can be reached at smrfeedback@mit.edu. MIT Sloan Management Review leads the discourse among academic researchers, business executives and other influential thought leaders about advances in management practice that are transforming how people lead and innovate.

Didier Bonnet is a Senior Vice President and Global Practice Leader at Capgemini Consulting. Michael Welch is a Managing Consultant at Capgemini Consulting and Visiting Scientist at MIT’s Center for Digital Business. Digital trends and observations from Davos 2018. – by Nicolaus Henke and Paul Willmott The massive snowfall in Davos this year certainly made getting around a little more challenging compared to years past, but that did nothing to dampen the conversation. We were fortunate to be at this year’s World Economic Forum, and after dozens of conversations with executives from around the world, we wanted to share a number of things that struck us about what we heard.

Cosa sono gli agrofarmaci - Antonio Pascale. Blockchain: come la "catena dei blocchi" cambierà aziende e startup fintech. Blockchain explained: What it is and isn’t, and why it matters. Understanding how blockchain creates business value is essential for companies to identify the right use cases and move beyond small pilots to widespread adoption. In this episode of the McKinsey Podcast, McKinsey partners Brant Carson and Matt Higginson speak with Simon London not only about how companies can drive business value through blockchain—but also how business leaders can determine when blockchain is and isn’t the right innovation.

Podcast transcript Simon London: Hello, and welcome to this edition of the McKinsey Podcast with me, Simon London. Today we’re going to be talking about blockchain, the technology that underpins Bitcoin and other cryptocurrencies. As we’ll hear, blockchain has a lot of potential applications, in areas as diverse as supply-chain management, trade finance, insurance, and even cybersecurity. Bentivogli lavoro. A winning IoT strategy. Three practices can help differentiate successful companies from those that struggle to gain traction. Internet of Things (IoT) technologies have evolved rapidly in recent years and continue to change how we interact with our surroundings. For companies, IoT brings new ways to monitor and manage objects in the physical world, while massive new streams of data offer better avenues for decision making (often mediated by machines). The steady fall in prices of sensors and communications technologies, combined with a parallel rise in understanding of how they can be applied, have raised the strategic importance of IoT.

As we have shown elsewhere, this can produce immense value in settings ranging from retail and healthcare to manufacturing and technology. Despite the promise, we continue to see substantial differences in how well companies apply IoT in their businesses. Habit 1: Begin with what you already do, make, or sell. Artificial intelligence in business. AI problems and promises. The time may have finally come for artificial intelligence (AI) after periods of hype followed by several “AI winters” over the past 60 years. AI now powers so many real-world applications, ranging from facial recognition to language translators and assistants like Siri and Alexa, that we barely notice it. Along with these consumer applications, companies across sectors are increasingly harnessing AI’s power in their operations.

Embracing AI promises considerable benefits for businesses and economies through its contributions to productivity growth and innovation. AI adoption: Why a digital base is critical. Early AI adopters are starting to shift industry profit pools. Companies need strong digital capabilities to compete. The diffusion of a new technology, whether ATMs in banking or radio-frequency identification tags in retailing, typically traces an S-curve. Early on, a few power users bet heavily on the innovation. AI & creativity. Asking the right questions to define government’s role in national cyber security. There is no one-size-fits-all approach for governments to manage cybersecurity. But asking some key questions can help leaders get started. Government leaders are increasingly aware that promoting prosperity and protecting national security includes providing cybersecurity.

That means demonstrating that a nation, state, region, or city is a safe place to live and do business online. And it includes deterring cyberattacks, preventing cyber-related crime, and protecting critical national infrastructure while also maintaining an environment that makes technological progress easy. Intelligenzaartificiale.it Deep Learning.