Brains and craniums. Bipedalism. War. The cradle of civilization. DNA/genetics. Aquatic. Evolution, anatomy, physiology and diet. The Paleoanthropology Society Home Page. Fossilized teeth provide new insight into human ancestor: Species identified in 2010 is one of closest relatives to humans. Newly discovered foot points to a new kid on the hominin block. It seems that "Lucy" was not the only hominin on the block in northern Africa about 3 million years ago. 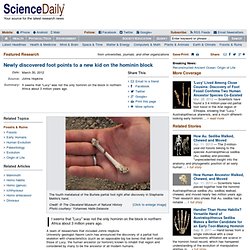 A team of researchers that included Johns Hopkins University geologist Naomi Levin has announced the discovery of a partial foot skeleton with characteristics (such as an opposable big toe bone) that don't match those of Lucy, the human ancestor (or hominin) known to inhabit that region and considered by many to be the ancestor of all modern humans. The discovery is important because it provides first-ever evidence that at least two pre-human ancestors lived between 3 million and 4 million years ago in the Afar region of Ethiopia, and that they had different ways of moving around the landscape. "The foot belonged to a hominin species -- not yet named -- that overlaps in age with Lucy (Australopithecus afarensis).

Its discovery could shed light on how our ancestors learned to walk upright, according to Levin. Findings confirm early South African hominins. Apr. 15, 2013 — Close examination of the lower jawbone, teeth and skeleton of the hominid species Australopithecus sediba proves conclusively that it is uniquely different from a closely related species, Australopithecus africanus , according to a series of papers authored by a scientific team that includes several Texas A&M University researchers. 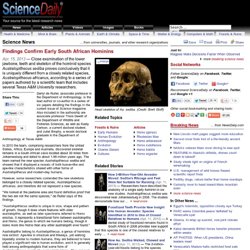 Top 10 Missing Links. First Human Ancestor Looked Like a Squirrel. This tree-dwelling animal saw the dawn of an era when mammals would come to dominate the planet. 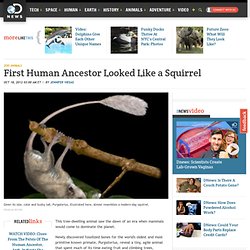 Newly discovered fossilized bones for the world's oldest and most primitive known primate, Purgatorius, reveal a tiny, agile animal that spent much of its time eating fruit and climbing trees, according to a study. The fossils, described today in a presentation at the Society of Vertebrate Paleontology's 72nd Annual Meeting in Raleigh, North Carolina, are the first known below-the-head bones for Purgatorius. Previously, only teeth revealed its existence. "The ankle bones show that it had a mobile ankle joint like primates today that live in trees," co-author Stephen Chester, a Yale University vertebrate paleontologist, told Discovery News.

"This mobility would have allowed for rotating the foot in different directions as it adjusted to different angles presented by tree trunks and branches. " Why Ida fossil is not the missing link - opinion - 21 May 2009. Unbridled hoopla attended the unveiling of a 47-million-year-old fossil primate skeleton at the American Museum of Natural History in New York on 19 May. 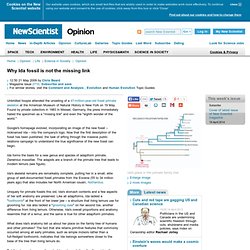 Evolution is written all over your face. Introduction: Human Evolution - life - 04 September 2006. Read full article Continue reading page |1|2|3 The incredible story of our evolution from ape ancestors spans 6 million years or more, and features the acquirement of traits from bipedal walking, large brains, hairlessness, tool-making, hunting and harnessing fire, to the more recent development of language, art, culture and civilisation. 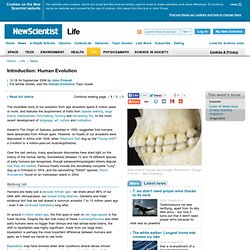 Darwin's The Origin of Species, published in 1859, suggested that humans were descended from African apes. However, no fossils of our ancestors were discovered in Africa until 1924, when Raymond Dart dug up the "Taung child" - a 3-million to 4 million-year-old Australopithecine. Fossil Database. Herpes Study Confirms Human Migration Patterns (MAP) What can cold sores tell us about the "out of Africa" theory of human migration? 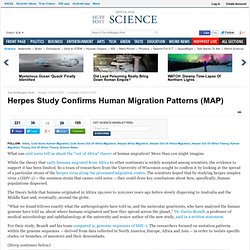 More than you might imagine. While the theory that early humans migrated from Africa to other continents is widely accepted among scientists, the evidence to support it has been limited. So a team of researchers from the University of Wisconsin sought to confirm it by looking at the spread of a particular strain of the herpes virus along the presumed migration routes. The scientists hoped that by studying herpes simplex virus 1 (HSV-1) -- the common strain that causes cold sores -- they could draw key conclusions about how, specifically, human populations dispersed.

The theory holds that humans originated in Africa 150,000 to 200,000 years ago before slowly dispersing to Australia and the Middle East and, eventually, around the globe. For their study, Brandt and his team compared 31 genomic sequences of HSV-1. (Story continues below) Also on HuffPost: Darwin's Natural Selection Still at Work in Humans. The evolutionary process that Charles Darwin discovered almost 150 years ago, responsible for transforming dinosaurs into birds and allowing the walking ancestors of whales to take to the seas, is still quietly at work in humans today. 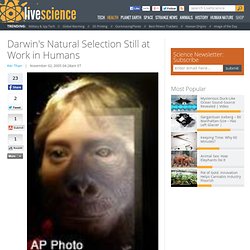 Darwin's natural selection is the process by which nature rewards those individuals better adapted to their environments with survival and reproductive success. How Culture Drove Human Evolution. The two systems begin interacting over time, and the most important selection pressures over the course of human evolution are the things that culture creates—like tools. 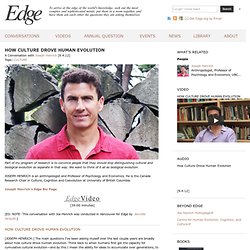 Compared to chimpanzees, we have high levels of manual dexterity. We're good at throwing objects. We can thread a needle. There are aspects of our brain that seem to be consistent with that as being an innate ability, but tools and artifacts (the kinds of things that one finds useful to throw or finds useful to manipulate) are themselves products of cultural evolution. Another example here is fire and cooking. Another area that we've worked on is social status. Cradle of Humanity Older Than Thought. The neighborhood you grew up in never quite looks the same when you go back. 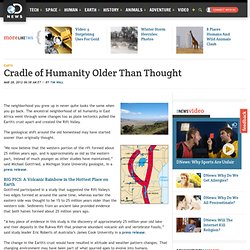 The ancestral neighborhood of all humanity in East Africa went through some changes too as plate tectonics pulled the Earth's crust apart and created the Rift Valley. The geological shift around the old homestead may have started sooner than originally thought. "We now believe that the western portion of the rift formed about 25 million years ago, and is approximately as old as the eastern part, instead of much younger as other studies have maintained,” said Michael Gottfried, a Michigan State University geologist, in a press release. Rude awakenings: How swearing made us human - life - 30 December 2013. (Image: Andy Smith) Our crudest outbursts can unravel ancient links between words and thoughts. 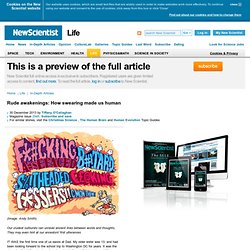 They may even hint at our ancestors' first utterances IT WAS the first time one of us swore at Dad. My older sister was 13, and had been looking forward to the school trip to Washington DC for years. It was the pinnacle of middle school – a long bus ride to the capital, two days visiting important sites and an overnight stay in a hotel with her friends. But as I eavesdropped from the next room, I realised my parents were telling her she couldn't go. Our earliest primate cousin discovered in Asia - life - 05 June 2013. OUR distant ancestors evolved not in Africa but Asia, in a hothouse world newly free of dinosaurs. Over 55 million years ago, in the lush rainforests of what is now east Asia, a new voice was heard in the animal chorus: the cry of the first primate.

A fossil unveiled this week might give us an idea of what this crucial ancestor looked like. Is this the ancestor of all primates? - life - 05 June 2013. (Image: Paul Tafforeau (ESRF) and Xijun Ni (Chinese Academy of Sciences)) Could this tiny animal, with a body just seven centimetres long, be the ancestor of all living primates – including humans? For now, its official classification makes it a tarsier cousin of ours, one step removed on our primate family tree. But we have spoken to a few palaeontologists who know the fossil well, and they say there's a chance we may one day realise Archicebus achilles is in fact a direct ancestor of humans.

16. There is still a question in some people's minds as to whether man is a result of evolution or whether he was specially created by God. In the interest of a more cordial understanding between these two groups, I wish to point out that there is no real basis for conflict. New Fossils Help Bring Hobbit Humans to Life. New bones attributed to Homo floresiensis -- aka the "Hobbit Human" -- along with other recent findings, are helping to reveal what members of this species looked like, how they behaved, and their origins.

Mystery human fossils put spotlight on China. Lao skull earliest example of modern human fossil in Southeast Asia. Faces of Our Ancestors. New evidence for the earliest modern humans in Europe. The timing, process and archaeology of the peopling of Europe by early modern humans have been actively debated for more than a century. Reassessment of the anatomy and dating of a fragmentary upper jaw with three teeth from Kent's Cavern, Devon, in southern England has shed new light on these issues. Originally found in 1927, Kent's Cavern and its human fossil have been reassessed by an international team, including Erik Trinkaus, PhD, professor of anthropology in Arts & Sciences at Washington University in St.

Native American populations descend from three key migrations, scientists say. Scientists have found that Native American populations -- from Canada to the southern tip of Chile -- arose from at least three migrations, with the majority descended entirely from a single group of First American migrants that crossed over through Beringia, a land bridge between Asia and America that existed during the ice ages, more than 15,000 years ago. Dig discovers ancient Britons were earliest North Europeans.