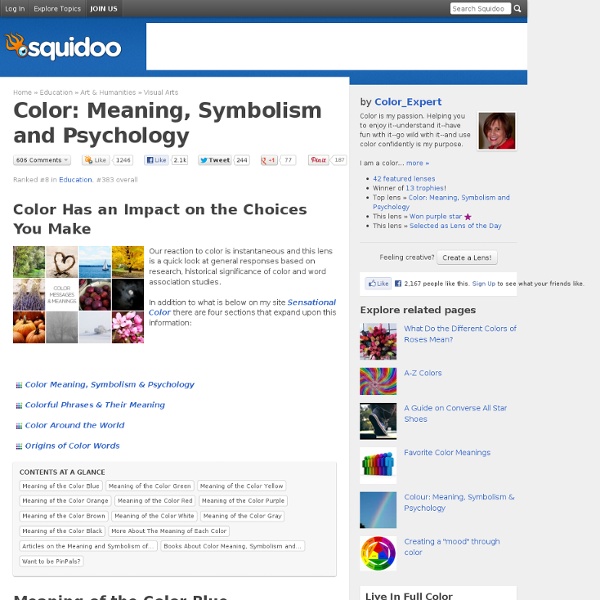 Green occupies more space in the spectrum visible to the human eye and is second only to blue as a favorite color. Green is the pervasive color in the natural world that is an ideal backdrop in interior design because we are so used to seeing it everywhere. The natural greens, from forest to lime, are seen as tranquil and refreshing, with a natural balance of cool and warm (blue and yellow) undertones. Green is considered the color of peace and ecology. However, there is an "institutional" side to green, associated with illness or Government-issued that conjure up negative emotions as do the "slimy" or bilious greens. How the color green affects us physically and mentally * Soothing * Relaxing mentally as well as physically * Helps alleviate depression, nervousness and anxiety * Offers a sense of renewal, self-control and harmony For more information see "All About the Color Green"

Color Meanings | Color Symbolism | Meaning of Colors This is part two of a three-part series on color. Part one was Color Therapy & Healing. You can read part three: The Psychological Effects of Color, where we will delve into the psychology of some specific colors and how they might affect your everyday life. Here are the topics covered in this article: The Meaning of Colors You Choose Carl Jung, a renowned psychiatrist and proponent of art therapy, encouraged his patients to use color because he felt this would help them express some of the deeper parts of their psyche. The colors you choose to wear might also say something about how you are feeling that day. How Do We See Color? There are 2 main sources of light that create the colors we see: the sun and lightbulbs. Surfaces reflect and absorb light differently, which results in the colors we see through our eyes. The colored light enters the eye through the pupil, goes through the lens, then reaches the back of the eye called the retina. Here you can see a basic color wheel.

Berkeley on Biphasic Sleep If you see a student dozing in the library or a co-worker catching 40 winks in her cubicle, don’t roll your eyes. New research from the University of California, Berkeley, shows that an hour’s nap can dramatically boost and restore your brain power. Indeed, the findings suggest that a biphasic sleep schedule not only refreshes the mind, but can make you smarter. Students who napped (green column) did markedly better in memorizing tests than their no-nap counterparts. Conversely, the more hours we spend awake, the more sluggish our minds become, according to the findings. “Sleep not only rights the wrong of prolonged wakefulness but, at a neurocognitive level, it moves you beyond where you were before you took a nap,” said Matthew Walker, an assistant professor of psychology at UC Berkeley and the lead investigator of these studies. In the recent UC Berkeley sleep study, 39 healthy young adults were divided into two groups — nap and no-nap.

Color Matters welcomes you to the world of color: Symbolism, design, vision, science, marketing and more! 10 Practical Uses For Psychological Research in Everyday Life | People love to give each other advice. The web is full to bursting with all types of pseudo-psychological advice about life. The problem is, how much of this is based on real scientific evidence? Well, here on PsyBlog we’ve got the scientific evidence. So here’s my top 10 list of what you can learn practically from the psychological research discussed here recently. 1. 2. 3. 4. 5. 6. 7. 8. 9. 10. Learn about Color - Pratt & Lambert® Paints Explore color and discover something new about yourself. Why are you drawn to certain hues? What shades inspire you? Use what you know Color is the most impactful element to consider when decorating your home. This section will help you understand the art and the science of color so that you can better use it in your home to create the environment you desire. Moods of Color Once you realize the impact color plays on mood - and mood plays on color - you'll be empowered to use it in your home to create the environment you desire. Color Theory & Behavior The art and science of color can be complicated. Color Tools From color cards and inspiration cards to fan decks, color samples and our color visualizer, the color experts at Pratt & Lambert have assembled an amazing array of tools for the discriminating homeowner or professional. Color Selection

Bert Monroy An On-Off Switch for Anxiety With the flick of a precisely placed light switch, mice can be induced to cower in a corner in fear or bravely explore their environment. The study highlights the power of optogenetics technology—which allows neuroscientists to control genetically engineered neurons with light—to explore the functions of complex neural wiring and to control behavior. In the study, Karl Deisseroth and collaborators at Stanford University identified a specific circuit in the amygdala, a part of the brain that is central to fear, aggression, and other basic emotions, that appears to regulate anxiety in rodents. They hope the findings, published today in the journal Nature, will shed light on the biological basis for human anxiety disorders and point toward new targets for treatment. “We want to conceptualize psychiatric disease as real physical entities with physical substrates,” says Deisseroth.

Modern Art Timeline - Artists, Movements and Styles Artists, Movements and Styles in Modern Art (1870-1930) Impressionism is the name given to a colorful style of painting in France at the end of the 19th century. The Impressionists searched for a more exact analysis of the effects of color and light in nature. They sought to capture the atmosphere of a particular time of day or the effects of different weather conditions. Among the most important Impressionist painters were Claude Monet, Pierre Auguste Renoir, Edgar Degas, Camille Pissarro, Alfred Sisley and Henri de Toulouse Lautrec. Post Impressionism (c.1885-1905) VINCENT VAN GOGH (1853-90) 'Café Terrace at Night', 1888 (oil on canvas) Post Impressionism was not a particular style of painting. Cézanne was an important influence on Picasso and Braque in their development of Cubism. Fauvism (1905-1910) HENRI MATISSE (1869-1954) 'The Open Window, Collioure', 1905 (oil on canvas) Fauvism was a joyful style of painting that delighted in using outrageously bold colors. Cubism (1907-1915)

The Neuroscience of Decision Making In an attempt to put matter over mind, researchers are beginning to decipher what exactly is happening in our brains when we are making decisions. Our thoughts, though abstract and vaporous in form, are determined by the actions of specific neuronal circuits in our brains. The interdisciplinary field known as “decision neuroscience” is uncovering those circuits, thereby mapping thinking on a cellular level. Although still a young field, research in this area has exploded in the last decade, with findings suggesting it is possible to parse out the complexity of thinking into its individual components and decipher how they are integrated when we ponder. Recently, three experts in decision neuroscience discussed their work, describing the genesis of this cutting-edge field and why it incorporates several disciplines. DAEYEOL LEE, PhD, Department of Neurobiology and Kavli Institute for Neuroscience, Yale University School of Medicine C. C. WANG: Yes.