Native Americans, Neanderthal and Denisova Admixture. Recently, a Neanderthal toe bone yielded enough DNA to sequence the full genome of the woman whose remains were found in the Denisova Cave in the Altai Mountains, shown above. 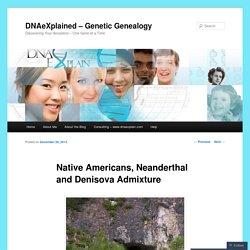 This information was published in the Journal Nature in an article titled “The complete genome sequence of a Neanderthal from the Altai Mountains” by Prufer et al. I wrote about what was found here, but it wasn’t until I really read the 200+ pages of supplemental information that I found additional buried information. The article itself talks about some of the findings relative to Native Americans, but the supplemental information provides additional detail and the supporting charts. In the paper, the Mixe and the Karitiana people of Mexico and Brazil, respectively were most often used to represent Native Americans. There are about 90,000 Mixe language speakers alive today, so their population is not small. Here’s what the article itself has to say about Neanderthals, Denisovans and Native Americans. Dr. Like this: Your Neanderthal DNA may have given you allergies. In the American Journal of Human Genetics, two research teams reported that in many people, a group of genes that governs the first line of defense against pathogens was probably inherited from Neanderthals. 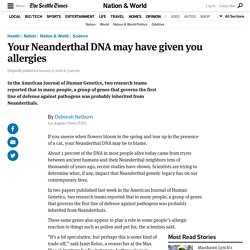 If you sneeze when flowers bloom in the spring and tear up in the presence of a cat, your Neanderthal DNA may be to blame. About 2 percent of the DNA in most people alive today came from trysts between ancient humans and their Neanderthal neighbors tens of thousands of years ago, recent studies have shown. Scientists are trying to determine what, if any, impact that Neanderthal genetic legacy has on our contemporary lives. In two papers published last week in the American Journal of Human Genetics, two research teams reported that in many people, a group of genes that governs the first line of defense against pathogens was probably inherited from Neanderthals.

Not everyone with Neanderthal DNA inherited the same genes. A Blog Around The Clock, Scientific American Blog Network. Nothing too complicated today, but something you should all know (originally from March 13, 2006). 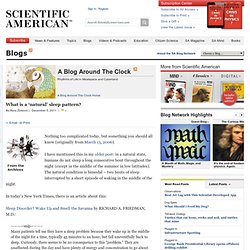 I have mentioned this in my older post: in a natural state, humans do not sleep a long consecutive bout throughout the night (except in the middle of the summer in low latitudes). The natural condition is bimodal – two bouts of sleep interrupted by a short episode of waking in the middle of the night. In today’s New York Times, there is an article about this: Sleep Disorder? Wake Up and Smell the Savanna by RICHARD A. ————snip———– Many patients tell me they have a sleep problem because they wake up in the middle of the night for a time, typically 45 minutes to an hour, but fall uneventfully back to sleep. I have nothing to add, except I can also give you an image I dug up – the original data from Wehr’s experiment. Related reading: Everything You Always Wanted To Know About Sleep (But Were Too Afraid To Ask)Sun Time is the Real TimeLesson of the Day: Circadian Clocks are HARD to shift!

Here's Why People Love Deep Bass Sounds In Music. Why do music lovers like it so much when the beat drops? 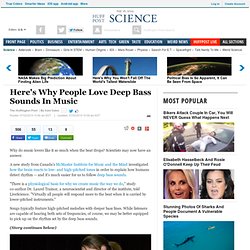 Scientists may now have an answer. A new study from Canada's McMaster Institute for Music and the Mind investigated how the brain reacts to low- and high-pitched tones in order to explain how humans detect rhythm -- and it's much easier for us to follow deep bass sounds. "There is a physiological basis for why we create music the way we do," study co-author Dr. Laurel Trainor, a neuroscientist and director of the institute, told LiveScience. "Virtually all people will respond more to the beat when it is carried by lower-pitched instruments. " Songs typically feature high-pitched melodies with deeper bass lines. (Story continues below) McMaster student Kristin Tonus tries on sensors at the McMaster Institute for Music and the Mind.

In the study, Trainor and her colleagues monitored electrical activity in the brains of 35 people. Next, the researchers played those sequences through a computer model of the human ear.