The Weather Channel’s Green-Screen Hurricane Simulation Is Terrifying. Hurricane Florence made landfall as a Category 1 storm on the southern East Coast early Friday morning, bringing with it unrelenting 90 mph winds, a massive storm surge, and heavy rains that will continue to soak the Carolinas for days to come. 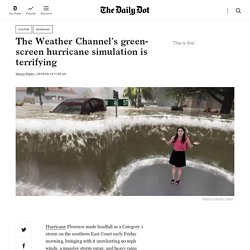 Speaking with NPR’s Morning Edition, North Carolina Governor Roy Cooper described the storm as “an uninvited brute who doesn’t want to leave.” “We know we’re in for a long haul here,” he said of the forecast for the coming days. “But I think we’re ready.” Many residents along the coast were issued mandatory evacuations, with forecasters warning of “life-threatening, catastrophic flash flooding.” To fully drive this point home, before the storm arrived on Thursday, Weather Channel meteorologist Erika L. - The Washington Post.

It’s time again for Hurricane Preparedness Week! Some communities in Alabama are still struggling to recover from 2018’s Atlantic hurricane season, and it’s already time to start preparing for the 2019 season. 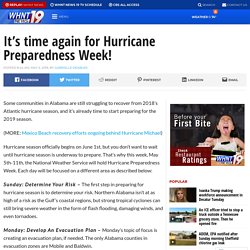 (MORE: Mexico Beach recovery efforts ongoing behind Hurricane Michael) Hurricane season officially begins on June 1st, but you don’t want to wait until hurricane season is underway to prepare. That’s why this week, May 5th-11th, the National Weather Service will hold Hurricane Preparedness Week. Each day will be focused on a different area as described below: Sunday: Determine Your Risk – The first step in preparing for hurricane season is to determine your risk. Monday: Develop An Evacuation Plan – Monday’s topic of focus is creating an evacuation plan, if needed. Tuesday: Assemble Disaster Supplies – Tuesday is the day to put together your safety kits. Wednesday: Get An Insurance Check-Up – Take some time Wednesday to review your insurance policy. NOAA releases 2019 Atlantic Hurricane Outlook. The National Oceanic and Atmospheric Administration (NOAA) has released their 2019 outlook for the upcoming Atlantic hurricane season, which leans toward a near-normal season. 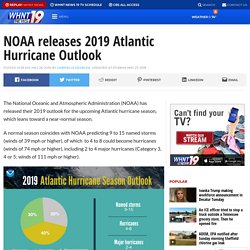 While there are numerous factors that contribute to NOAA’s outlook, there are two factors in particular that influenced the outlook this year: sea surface temperatures and an El Niño pattern. Warmer than average sea surface temperatures over the Atlantic favor storm development. The warm waters offer more fuel for developing storms, which would push for an above average season. Global heating made Hurricane Dorian bigger, wetter – and more deadly. The Bahamas, for those who live there, is simply a place to call home. 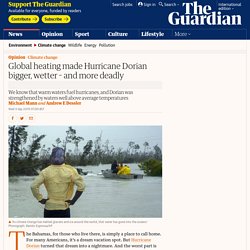 For many Americans, it’s a dream vacation spot. But Hurricane Dorian turned that dream into a nightmare. And the worst part is this is only the beginning. Because unless we confront the climate crisis, warming will turn more and more of our fantastic landscapes, cities we call paradise and other dream destinations into nightmarish hellscapes. While the science has yet to come in on the specifics of just how much worse climate change made Dorian, we already know enough to say that warming worsened the damage. 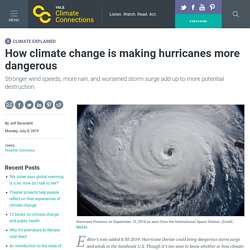 Though it’s too soon to know whether or how climate change is influencing this specific storm, as meteorologist Jeff Berardelli explains, some hurricanes are growing more severe as a result of rising global temperatures. Major hurricanes are by far the world’s costliest natural weather disasters, in some cases causing well over $100 billion in damage. There’s now evidence that the unnatural effects of human-caused global warming are already making hurricanes stronger and more destructive.

The latest research shows the trend is likely to continue as long as the climate continues to warm. Eco.logic. WorldWide. WEATHER.