Forecasting, research, documentation and commentary on this tragic effect of human madness/virus. 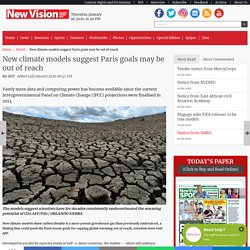 New climate models show carbon dioxide is a more potent greenhouse gas than previously understood, a finding that could push the Paris treaty goals for capping global warming out of reach, scientists have told AFP. Developed in parallel by separate teams in half-a-dozen countries, the models -- which will underpin revised UN temperature projections next year -- suggest scientists have for decades consistently underestimated the warming potential of CO2. "We have better models now," Olivier Boucher, head of the Institut Pierre Simon Laplace Climate Modelling Centre in Paris, told AFP, adding that they "represent current climate trends more accurately". 'Holy grail' for scientists Shifting perceptions. World Scientists' Warning to Humanity 1992. World Scientists’ Warning of a Climate Emergency. We use cookies to enhance your experience on our website.By continuing to use our website, you are agreeing to our use of cookies. 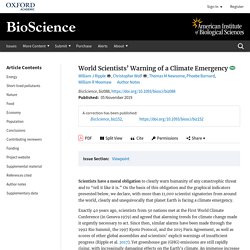 You can change your cookie settings at any time. <a href=" Find out more</a> Skip to Main Content Sign In Register Close Advanced Search Article Navigation Article Contents World Scientists’ Warning of a Climate Emergency William J Ripple Department of Forest Ecosystems and Society at Oregon State University , in Corvallis E-mail: bill.ripple@oregonstate.edu Search for other works by this author on: Oxford Academic Google Scholar William J Ripple, Christopher Wolf E-mail: christopher.wolf@oregonstate.edu Oxford Academic Google Scholar. Routledge Handbook of Global Sustainability Governance. Chapter 18 11 Pages Efficiency without sufficiency is lost Techno-optimism can be broadly defined as the belief that science and technology will be able to solve the major social and environmental problems of our times, without fundamentally rethinking the structure or goals of our growth-based economies or the nature of Western-style, affluent lifestyles. 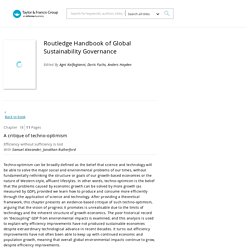 In other words, techno-optimism is the belief that the problems caused by economic growth can be solved by more growth (as measured by GDP), provided we learn how to produce and consume more efficiently through the application of science and technology. After providing a theoretical framework, this chapter presents an evidence-based critique of such techno-optimism, arguing that the vision of progress it promotes is unrealisable due to the limits of technology and the inherent structure of growth economics.

Climate crisis: 11,000 scientists warn of ‘untold suffering’ The world’s people face “untold suffering due to the climate crisis” unless there are major transformations to global society, according to a stark warning from more than 11,000 scientists. “We declare clearly and unequivocally that planet Earth is facing a climate emergency,” it states. “To secure a sustainable future, we must change how we live. [This] entails major transformations in the ways our global society functions and interacts with natural ecosystems.” There is no time to lose, the scientists say: “The climate crisis has arrived and is accelerating faster than most scientists expected.

It is more severe than anticipated, threatening natural ecosystems and the fate of humanity.” Trainer some inconvenient theses. Historical climate change maps show Australia getting hotter, drier. Agriculture Victoria climate specialist Graeme Anderson, who produced the maps with his colleague Jemma Pearl, told The Age and The Sydney Morning Herald that they'd done the work to show the difference between "good old-fashioned variability and the trends that come with climate change". 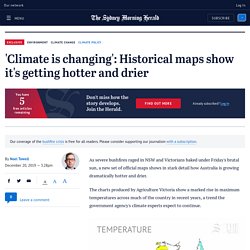 "We've got these increasing temperature trends from climate change and that's a trend that's expected to continue, predicted with high confidence from the atmospheric scientists," Mr Anderson said. But the scientist said the separate rainfall charts show that rainfall is likely to bounce back, when the conditions in the Pacific and Indian oceans are right. "There's a lot of variability in the system," Mr Anderson said. The 109-year sweep shows the extremes in Australia's weather. Related Video In 1974 much of Australia is shaded blue, reflecting the cool and very wet year. "It's vital that we keep working with our country communities to build their resilience to increasingly difficult conditions. " Prove Paris was more than paper promises. Kyodo News/Getty Japan is making efforts to restart some of its nuclear reactors, including reactors No. 3 and No. 4 at the Genkai power plant in Saga, Kyushu. 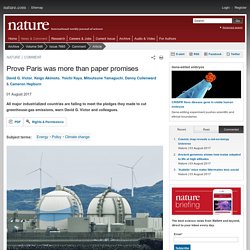 Beyond US President Donald Trump's decision in June to withdraw the United States from the 2015 Paris climate agreement, a more profound challenge to the global climate pact is emerging. No major advanced industrialized country is on track to meet its pledges to control the greenhouse-gas emissions that cause climate change. Wishful thinking and bravado are eclipsing reality. Countries in the European Union are struggling to increase energy efficiency and renewable power to the levels that they claimed they would. The Paris agreement offered, in theory, to reboot climate diplomacy by giving countries the flexibility to set their own commitments. Advanced industrialized nations are the key to getting the Paris agreement on track. Modest progress Emission rates are falling in almost all advanced industrialized countries. Slow movement. Extreme El Nino events to double in number even with 1.5-degree warming: study.