Enhancing Comprehension: Reading Skills in Middle School. Middle school is the time your child develops the sophisticated reading skills that allow him to analyze literature and master the content of the entire curriculum — social studies, science, math, health, and foreign languages. 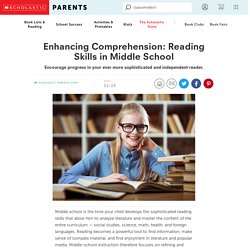 Reading becomes a powerful tool to find information, make sense of complex material, and find enjoyment in literature and popular media. Middle-school instruction therefore focuses on refining and strengthening existing skills. Key components are: 1. Strategic reading: Your child needs to learn how and when to skim and when to study thoroughly. Reading milestones: Reading with a purpose, knowing when it's important to understand every detail and when she can read quickly for pure enjoymentReading selectively, scanning chapter headings and introductory sentences to find necessary informationSkimming a chapter in a textbook to form an overall impression 2. 3. 4. ReadWriteThink. 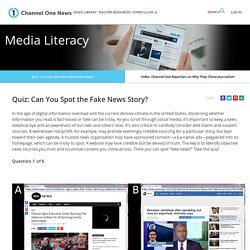 As you scroll through social media, it’s important to keep a keen, skeptical eye and an awareness of our own and others’ bias. It’s also critical to carefully consider wild claims and suspect sources. A well-known nonprofit, for example, may provide seemingly credible sourcing for a particular story, but lean toward their own agenda. A trusted news organization may have sponsored content—a.k.a native ads—peppered into its homepage, which can be tricky to spot. A website may look credible but be devoid of truth. 0 of 6 questions completed Questions: Information Take the quiz to see if you can you spot the fake news.

You have already completed the quiz before. You must sign in or sign up to start the quiz. You have to finish following quiz, to start this quiz: 0 of 6 questions answered correctly. How to Spot Real and Fake News. © GettyImagesclu Developing a critical mindset is the first step to spotting fake news. 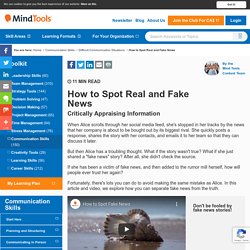 When Alice scrolls through her social media feed, she's stopped in her tracks by the news that her company is about to be bought out by its biggest rival. She quickly posts a response, shares the story with her contacts, and emails it to her team so that they can discuss it later. DELINGPOLE: 'Global Warming' Is a Myth, Say 58 Scientific Papers in 2017. In other words, the so-called “Consensus” on global warming is a massive lie. 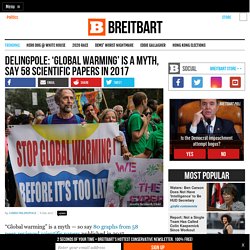 And Donald Trump was quite right to quit the Paris agreement which pretended that the massive lie was true. By “global warming” these papers don’t, of course, mean the mild warming of around 0.8 degrees Celsius that the planet has experienced since the middle of the 19th century as the world crawled out of the Little Ice Age. Taking On Fake News About Climate Change. Featuring: John Cook · At: CSICon 2018 · Topic(s): Pseudoscience, Science Communication There’s overwhelming scientific evidence and consensus that global warming is happening and humans are the cause. 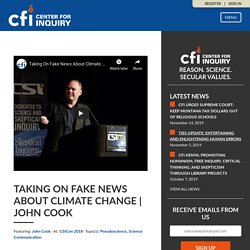 However, there’s also a deluge of misinformation designed to confuse the public and generate doubt about climate change. How should we respond to the firehose of falsehoods? One way to neutralize the influence of misinformation is through inoculation. This takes the idea of vaccination and applies it to knowledge—we can build immunity to misinformation by exposing people to a weak form of misinformation. John Cook is a research assistant professor at the Center for Climate Change Communication at George Mason University. Watch more from CSICon 2018.

David Koch Was the Ultimate Climate Change Denier. A few years ago, I was sitting in the book-lined study of an elegant condo with a view of downtown Washington, interviewing a former senior Koch Industries lobbyist about his job. 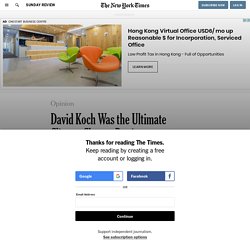 I asked him what got him up in the morning when he worked for Koch. He gave me a one-word answer: “Carbon.” At the time, I had been reporting for years on Koch Industries, one of the largest and most confusingly complex private companies in the world. Its annual revenue is larger than that of Facebook, Goldman Sachs and U.S. Case Study: Polar Bear Junk Science and Koch Industries On this page. Page – March 29, 2010 In 2007, several prominent climate denial scientists published a non-peer reviewed article (Dyck, Soon et al, 2007 “Polar bears of western Hudson Bay and climate change: Are warming spring air temperatures the “ultimate” survival control factor?”) 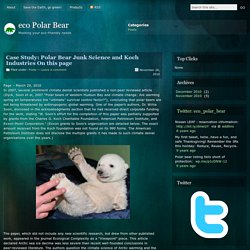 , concluding that polar bears are not being threatened by anthropogenic global warming. One of the paper’s authors, Dr. Willie Soon, disclosed in the acknowledgments section that he had received direct corporate funding for the work, stating “W. Soon’s effort for the completion of this paper was partially supported by grants from the Charles G. Koch Charitable Foundation, American Petroleum Institute, and Exxon-Mobil Corporation.” #ChildrenVsClimateCrisis.