Toward artificial intelligence that learns to write code. Learning to code involves recognizing how to structure a program, and how to fill in every last detail correctly. 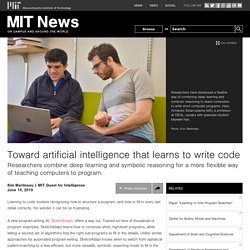 No wonder it can be so frustrating. A new program-writing AI, SketchAdapt, offers a way out. Trained on tens of thousands of program examples, SketchAdapt learns how to compose short, high-level programs, while letting a second set of algorithms find the right sub-programs to fill in the details. Unlike similar approaches for automated program-writing, SketchAdapt knows when to switch from statistical pattern-matching to a less efficient, but more versatile, symbolic reasoning mode to fill in the gaps.

“Neural nets are pretty good at getting the structure right, but not the details,” says Armando Solar-Lezama, a professor at MIT’s Computer Science and Artificial Intelligence Laboratory (CSAIL). Robot Scientists will Dream up New Materials. In a laboratory that overlooks a busy shopping street in Cambridge, Massachusetts, a robot is attempting to create new materials. 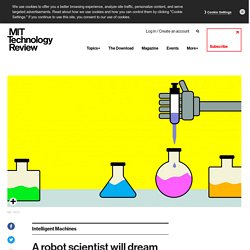 A robot arm dips a pipette into a dish and transfers a tiny amount of bright liquid into one of many receptacles sitting in front of another machine. When all the samples are ready, the second machine tests their optical properties, and the results are fed to a computer that controls the arm. Software analyzes the results of these experiments, formulates a few hypotheses, and then starts the process over again. Humans are barely required. Finally, a Problem Only Quantum Computers Will Ever Be Able to Solve. A Case for Neural Augmentation. Beyond the Hard Drive: Encoding Data in DNA. By Bryan Johnson | 10 July 2018 Medium This article is part of a series about how OS Fund (OSF) companies are radically redefining our future by rewriting the operating systems of life. 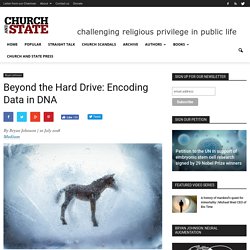 We'll Know Everything—Thanks to This Tech. How AI is Helping Discover Materials Faster than Ever. Globle; Democratising Innovation & Company Creation. AlphaGo Zero: Learning from scratch. It is able to do this by using a novel form of reinforcement learning, in which AlphaGo Zero becomes its own teacher. 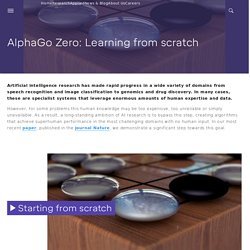 The Corporatization of AI is a Major Threat to Humanity. By Ben Goertzel This “editorial” article represents the personal views of the author, shaped by his 3 decades in the AI research community and 2 decades as an AI entrepreneur. 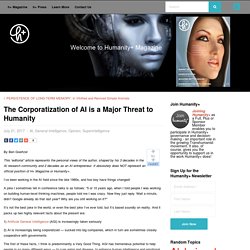 How VR, AR, & AI Can Change Education Forever. Face-Reading AI to Detect Your Politics & IQ. Voters have a right to keep their political beliefs private. 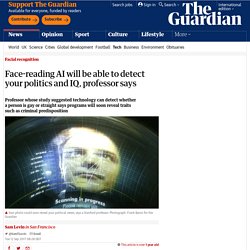 But according to some researchers, it won’t be long before a computer program can accurately guess whether people are liberal or conservative in an instant. All that will be needed are photos of their faces. Michal Kosinski – the Stanford University professor who went viral last week for research suggesting that artificial intelligence (AI) can detect whether people are gay or straight based on photos – said sexual orientation was just one of many characteristics that algorithms would be able to predict through facial recognition. 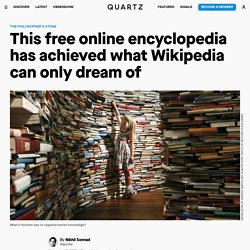 Not because of the content—which includes fascinating entries on everything from ambiguity to zombies—but because of the site itself. Its creators have solved one of the internet’s fundamental problems: How to provide authoritative, rigorously accurate knowledge, at no cost to readers. Smart Helmets That Protect Your Wallet. Ant's AI Insurance Assessor Learns From Peers. If you get into a car accident in China in the near future, you'll be able to pull out your smartphone, take a photo, and file an insurance claim with an AI system. 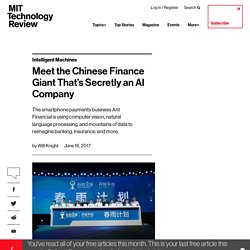 That system, from Ant Financial, will automatically decide how serious the ding was and process the claim accordingly with an insurer. It shows how the company—which already operates a hugely successful smartphone payments business in China—aims to upend many areas of personal finance using machine learning and AI. The e-commerce giant Alibaba created Ant in 2014 to operate Alipay, a ubiquitous mobile payments service in China. A Strategist’s Guide to Artificial Intelligence. Using AI to Detect Cancer, Not Just Cats. Shaokang Wang and his startup, Infervision, build algorithms that read X-ray images and identify early signs of lung cancer. 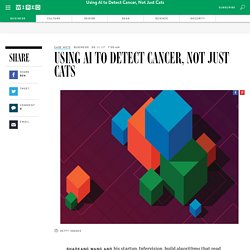 Robots Learn the Basic Algorithm that Underpins Human Intelligence? Theory of Connectivity The human brain is the most sophisticated organ in the human body. 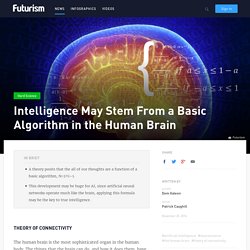 The things that the brain can do, and how it does them, have even inspired a model of artificial intelligence (AI). Now, a recent study published in the journal Frontiers in Systems Neuroscience shows how human intelligence may be a product of a basic algorithm. This algorithm is found in the Theory of Connectivity, a “relatively simple mathematical logic underlies our complex brain computations,” according to researcher and author Joe Tsien, neuroscientist at the Medical College of Georgia at Augusta University, co-director of the Augusta University Brain and Behavior Discovery Institute and Georgia Research Alliance Eminent Scholar in Cognitive and Systems Neurobiology. He first proposed the theory in October 2015. The brain’s formula The theory describes how groups of similar neurons form a complexity of cliques to handle basic ideas or information.

How Elon Musk Learns Faster & Better than Everyone Else. This past weekend Donald Trump praised his Chinese counterpart for his efforts to address the increasingly tense situation on the Korean peninsula. The US president said Xi Jinping “is working to try and resolve a very big problem, for China also.” That problem, of course, is the ongoing development of ballistic missiles and nuclear weapons by North Korean dictator Kim Jong-un, despite UN sanctions. Kim seems hellbent on being able to hit North America with nuclear-tipped missiles, and some analysts think he’s only a few years away from it. Why our Future Depends on Libraries, Reading & Daydreaming.

Philosophy can Teach what Google can’t – & Ireland Knows it. It’s Time to Rethink How We Are Educating Our Children. In Brief On the whole, the way we educate students hasn't gotten a major upgrade in more than a century. Technology has both revolutionized what we need to teach to children, but also the capabilities that we have at our disposal to teach. Educating for the Future Elon Musk seems to be making headlines every day with his spaceships and solar panels and gigafactories and colonies on mars and secret tunnels and AI labs and self-driving cars.