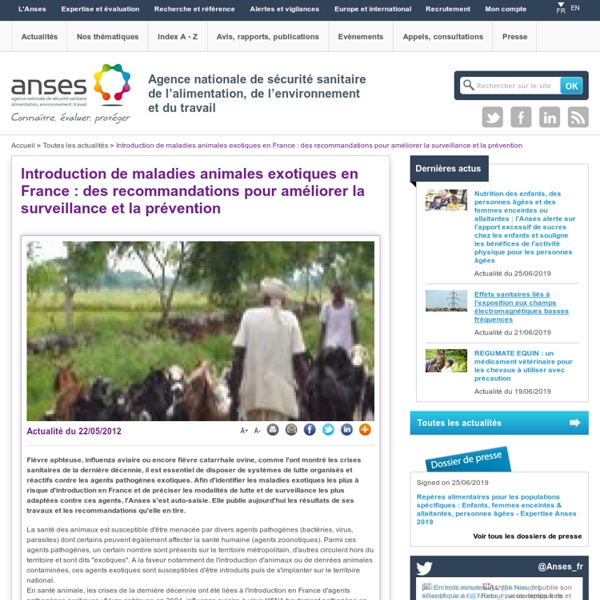 PLOS 05/08/15 Review of the 2012 Epizootic Hemorrhagic Disease Outbreak in Domestic Ruminants in the United States Abstract An unusually large number of cases of Epizootic hemorrhagic disease (EHD) were observed in United States cattle and white-tailed deer in the summer and fall of 2012. USDA APHIS Veterinary Services area offices were asked to report on foreign animal disease investigations and state diagnostic laboratory submissions which resulted in a diagnosis of EHD based on positive PCR results. EHD was reported in the following species: cattle (129 herds), captive white-tailed deer (65 herds), bison (8 herds), yak (6 herds), elk (1 herd), and sheep (1 flock). A majority of the cases in cattle and bison were found in Nebraska, South Dakota, and Iowa.

Trials in Vaccinology Volume 4, 2015, Pages 33–37 Development and field application of a new combined vaccine against Peste des Petits Ruminants and Sheep Pox Abstract A combined vaccine against Peste des Petits Ruminants (PPR) and Sheep/Goat Pox (SGP) was developed and applied in the field, using a new association of vaccine strains: PPR Nigeria 75 strain with a titre of 104.1 TCID50 and Sheep Pox Romania strain with a titre of 104.0 TCID50. Safety and efficacy were evaluated on goats and sheep in comparison with monovalent PPR and SGP vaccines. Goats were challenged by PPR virulent strain and sheep by SP virulent strain. The result shows that the combined PPR/SGP vaccine confers a good protection against both PPR and SGP infection with no significant difference with monovalent vaccines. The combined vaccine was used in the field on sheep flocks and good sero-conversion was detected for both diseases as soon as 14 days post vaccination.

PLOS 22/06/16 The Epidemiology of Rift Valley Fever in Mayotte: Insights and Perspectives from 11 Years of Data Abstract Rift Valley fever (RVF) is a zoonotic arboviral disease that is a threat to human health, animal health and production, mainly in Sub-Saharan Africa. RVF virus dynamics have been poorly studied due to data scarcity. On the island of Mayotte in the Indian Ocean, off the Southeastern African coast, RVF has been present since at least 2004. Several retrospective and prospective serological surveys in livestock have been conducted over eleven years (2004–15). These data are collated and presented here.

VIROLOGY JOURNAL 02/07/16 Requirements and comparative analysis of reverse genetics for bluetongue virus (BTV) and African horse sickness virus (AHSV) Bluetongue (BT), African horse sickness (AHS), and epizootic haemorrhagic disease (EHD) are OIE listed arthropod borne animal diseases caused by the viruses in the genus Orbivirus, family Reoviridae. These viruses are spread by specific species of Culicoides biting midges. Outbreaks and geographic expansion of affected areas are associated to various factors, including climate change [1, 2], and the presence of competent biting Culicoides midges [3]. Culicoides species in countries with a moderate climate are competent insect vectors for BTV [4, 5, 6]. This implies that countries historically free of disease are probably at risk for BT and other midge borne diseases [7]. The prototype bluetongue virus (BTV) and African horse sickness virus (AHSV) are the best studied orbiviruses, reviewed in [8].

WIKIPEDIA - Epizootic Hemorrhagic Disease. Epizootic hemorrhagic disease (EHD) is a hemorrhagic disease of white-tailed deer (Odocoileus virginianus) caused by an infection of a virus from the genus Orbivirus (Shope et al. 1960, Howarth et al. 2001).[1][2] It is an infectious, and sometimes fatal, virus that is characterized by extensive hemorrhages, and is found throughout the United States. History[edit] EHD was first reported in 1955 in New Jersey, killing 700 whitetails.

BMC Veterinary Research 25/01/17 Genetic detection of peste des petits ruminants virus under field conditions: a step forward towards disease eradication The overall aim of this research was to develop a reliable and cost-effective diagnostic test for on-site detection of peste des petits ruminants virus (PPRV) infection in sheep and goats based on LAMP technology that might serve as a foundation for the development of point of care diagnostic tests for different infectious diseases of livestock prevalent in Pakistan. We selected PPR disease to start with on the basis of two reasons viz. i) economic significance, ii) close relevance to its prototype, Riderpest (cattle plague) that has been effectively eradicated from the face of the earth. Current diagnostic tests for PPR involve the use of immunoassays to detect the antibodies against PPRV, virus isolation using adaptable cell lines and PPRV genome detection using RT-PCR or Real Time RT-PCR [13, 14, 15, 16, 17, 18]. However, these techniques require costly equipment and highly trained manpower that render these tests unsuitable for on-site application.

PLOS 06/07/15 A Stochastic Model to Study Rift Valley Fever Persistence with Different Seasonal Patterns of Vector Abundance: New Insights on the Endemicity in the Tropical Island of Mayotte Abstract Rift Valley fever (RVF) is a zoonotic vector-borne disease causing abortion storms in cattle and human epidemics in Africa. Our aim was to evaluate RVF persistence in a seasonal and isolated population and to apply it to Mayotte Island (Indian Ocean), where the virus was still silently circulating four years after its last known introduction in 2007. We proposed a stochastic model to estimate RVF persistence over several years and under four seasonal patterns of vector abundance. Firstly, the model predicted a wide range of virus spread patterns, from obligate persistence in a constant or tropical environment (without needing vertical transmission or reintroduction) to frequent extinctions in a drier climate. We then identified for each scenario of seasonality the parameters that most influenced prediction variations.