Www.maximpact.com/asap/api/public/publication/bb9baaab-bbbb-4999-aa98-8888b99ab8b8/data.aspx. Margareta Pagano: Let the crowd invest in the next Facebook - Margareta Pagano - Business Comment. You would be able to have a punt on the unknown Facebook start-up if you were able to prove you were either a high net worth individual (about £250,000 in the bank) or a sophisticated investor. But if you are what the Financial Conduct Authority (FCA) describes as a retail investor, you would have to seek advice from a regulated financial adviser. Even with that advice, which comes at a price, you would have to certify that you were investing only 10 per cent of your portfolio. Equity Crowdfunding: A Kickstarter for Companies Is Around the Corner. Crowdfunding Efforts Draw Suspicion. Investment banks: Gatekeepers no more as crowdfunding changes the game.

Investment Bankers have traditionally been the gatekeepers of access to the capital markets. 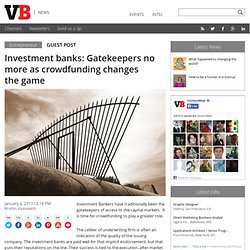 It is time for crowdfunding to play a greater role. The caliber of underwriting firm is often an indication of the quality of the issuing company. The investment banks are paid well for that implicit endorsement, but that puts their reputations on the line. Their success is tied to the execution, after market performance and perception of the deals they complete –so they had better be selective and smart.

However, the banks are not infallible. The funding environment. The playing field between institutional investors and “mom and pop” is not level. Ironically, retail investors have access to more information today than ever before, but often lack the ability to draw any useful conclusions. Crowdfunding will be a game changer for thousands of companies that are unable to find capital through traditional means. Crowdfunding changes the game – investment bankers will no longer be the gatekeepers.

Investment banks will no longer be the gatekeepers to access to capital markets. The gatekeepers of access to the capital markets have traditionally been investment bankers. Now it is time for crowdfunding to play a greater role. The caliber of underwriting firm is often an indication of the quality of the issuing company. The investment banks are paid well for that implicit endorsement, but that puts their reputations on the line. Their success is tied to the execution, after market performance and perception of the deals they complete –so they had better be selective and smart.

Crowdfunding: One Size Doesn’t Fit All « SoMoLend. In this interesting article, Forbes asks the question ‘Is the Crowdfunding Bubble About to Burst?’ 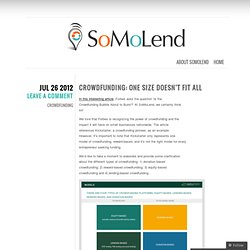 At SoMoLend, we certainly think so! We love that Forbes is recognizing the power of crowdfunding and the impact it will have on small businesses nationwide. The article references Kickstarter, a crowdfunding pioneer, as an example. However, it’s important to note that Kickstarter only represents one model of crowdfunding, reward-based, and it’s not the right model for every entrepreneur seeking funding. A Proposal to Allow Small Private Companies to Get Investors Online.

Weblog about crowdfunding & crowdsourcing. Why Crowdfunding is Today's Goldrush. Back in the gold rush days, the smart people were not the ones heading for the hills to dig holes. 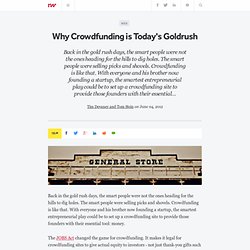 The smart people were selling picks and shovels. Www.nancywrites.com/uploads/7/6/9/0/7690504/trend_crowdfunding_2010.pdf. Documents.jdsupra.com/aeab6726-f0e5-41d7-92c1-837875a9b87f.pdf. Www.gbgusa.com/small-business-blog/6966-crowdfunding-becomes-new-funding-source-for-business-buyers.pdf. Since economy downturn of 2008 it became increasingly hard to get bank financing for buying a business. 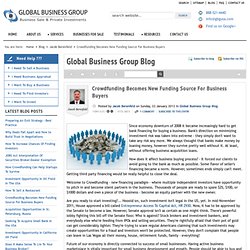 Bank's direction on minimizing investment risk was taken into extreme - they simply don't want to take any risk any more. We always thought that banks make money by loaning money, however they survive pretty well without it. At least, without offering business acquisition loans. Is Crowd-Funding Small Businesses A Good Idea? Ian Schuster Says Yes. Ian Schuster is a fan of beer and business. 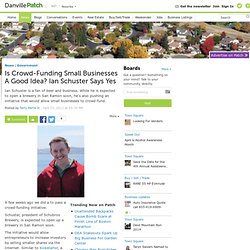 While he is expected to open a brewery in San Ramon soon, he's also pushing an initiative that would allow small businesses to crowd-fund. A few weeks ago we did a to pass a crowd-funding initiative. Schuster, president of Schubros Brewery, is expected to open up a brewery in San Ramon soon. Crowdfunding successes show value of small donations - tech - 04 April 2012. A proposed change in US legislation would allow everyone to invest in start-ups FANCY investing in the next Twitter? 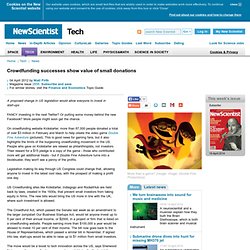 Or putting some money behind the new Facebook? More people might soon get the chance. On crowdfunding website Kickstarter, more than 87,000 people donated a total of over $3 million in February and March to help create the video game Double Fine Adventure (pictured). This is good news for gaming fans, but it also highlights the limits of the burgeoning crowdfunding movement in the US. Legislation making its way through US Congress could change that, allowing anyone to invest in the latest cool idea, with the prospect of making a profit one day. US Crowdfunding sites like Kickstarter, Indiegogo and RocketHub are held back by laws, created in the 1930s, that prevent small investors from taking equity in firms.

Crowdfunding as a College Student 101. Crowdfunding is about to blow up, yall. Change·Lending A new bill on the block will take crowdfunding (like that of Kickstarter.com) and gives it a serious boost, allowing any Joe to invest in new businesses. 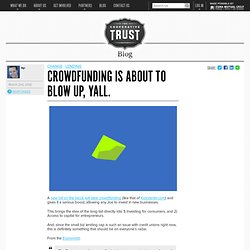 This brings the idea of the long-tail directly into 1) Investing for consumers, and 2) Access to capital for entrepreneurs. And, since the small biz lending cap is such an issue with credit unions right now, this is definitely something that should be on everyone’s radar. Crowdfunding: A Growing Trend. Image from Smallbiztrends.com As the recession hit and established businesses cut jobs in 2008, an entrepreneurial spike was seen in the US. 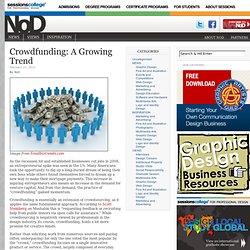 Many Americans took the opportunity to dig up a long-buried dream of being their own boss while others found themselves forced to dream up a new way to make their mortgage payments. This increase in aspiring entrepreneurs also means an increase in the demand for venture capital. And from this demand, the practice of “crowdfunding” gained momentum. Crowdfunding is essentially an extension of crowdsourcing, as it applies the same fundamental approach. Finance - Sprout, inspire entrepreneurs. Je zoekt 20.000 euro funding, maar krijgt geen lening van de bank en een investeerder vinden lukt ook niet zomaar. 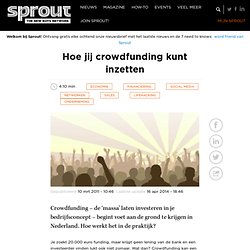 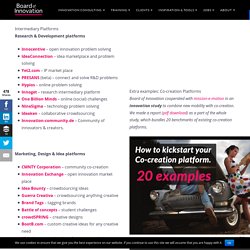 Marketing, Design & Idea platforms Collective Intelligence & Prediction platforms. An investigation: Some thoughts. I've been looking at Crowdfunding resources online over the last few days and I have a few thoughts in my head in response to some articles that I wanted to just get written down before they get lost for good. The thoughts below aren't fully realised - the purpose of writing them down at this stage is just so that I open them up as ideas for later consideration and so that they exist in written form so I don't forget them. Once you've had a read please feel free to comment. Following an excellent and informative lecture/seminar/presentation from the co-founder of the crowdfunding platform/portal IndieGoGo, Slava Rubin, at the SheffDocFest Convergence Catalyst conference (phew) in December I stumbled upon a similar presentation by other co-founder Danae Ringelmann on Youtube: Whilst the presentation is excellent in itself (and I advise anyone interested in CF to watch it) some questions arose about points made in the latter part of the video.

Crowdfunding is Great, But is it Right For Startups? Crowdfunding, Micropayments and Publishers. ©Naveen Jamal I was reading an article in Fast Company about the launch of Emphas.is and came across an aspect about the model that I really hadn’t thought much about – the role and opportunity for publishers. Publishers, too, if they take a shine to a project on the site, can secure first publication rights by funding up to 50% of the project. Publishers also, of course, have to pay a negotiated fee for the photographer’s work. It’ll be interesting to see what stories get picked up by large publications. BULLETINS. A customized distribution strategy enables filmmakers to make the most of festivals (the first avenue of distribution), choose the best distribution partners, and negotiate win-win deals. While I was preparing to go to the Sundance Film Festival (the most influential American festival) and speaking with clients about their plans for the Festival, Thom Powers (who programs docs for the Toronto International Film Festival, and is the Artistic Director of the DOC NYC festival and the Stranger Than Fiction documentary series in New York City) asked me to contribute to a pre-Sundance compilation of advice for documentary filmmakers.

His request inspired me to summarize my recommendations on festival and negotiating strategies. After I sent him my comments, I decided to expand them for this Distribution Bulletin. I’ve also included fiction features. Distribution strategies for documentaries and fiction overlap in many areas but differ in others. Remember, no deal is better than a bad deal. How to Crowdfund Your Next Big Idea. Scott Steinberg is a small business expert, professional keynote speaker, noted strategic consultant, and creator of The Business Expert’s Guidebook series and video show Business Expert: Small Business Tips, Trends and Advice.

Entrepreneurs and startups can download and share free guides, tip sheets and inside advice from his website. Cult favorite video game developer Double Fine recently shocked investors by raising over $1 million in 24 hours on Kickstarter for its new adventure game, despite the genre’s supposed death. This has led critics to speculate that crowdsourcing isn’t just the hottest new thing to happen to startups and small business owners since Apple’s App Store; it may also present tomorrow’s most promising new source of venture capital and angel investment. 9 crowdfunding websites to help you change the world. - Webdistortion. "Musicians must find new ways" - NZZ, 23 March 2012. Is Crowdfunding Better Than Sliced Bread? Getting A Share- Equity-Based Crowdfunding. Crowdfunding- A Concept Whose Time Has Come?

On Tuesday 20th September, at Social Media Week Glasgow, an entire day was spent dealing with the subject of Crowdfunding. Crowd-funding sites getting attention from investors. Crowdfunding. One of the latest trends in financing for start ups is crowd funding. Trendcentral. Lucky Ant: Though it’s a tough time to own a small business, allegiances to local communities have never been stronger. The Manning Crowd. Are Crowd Funding Platforms the New Patrons of Independent Media? Note from Beth: Over five years ago, I connected with Sam Mayfield, an independent media maker, through my blog. In 2008, she asked for advice about raising money to go to Africa to help support the first community access television station opening in Ghana.

A Brief History of Crowdfunding) Crowd funding is an option for non-profit organizations? Crowd Funding Disadvantages - Crowd Funding. Crowdfunding Could Be the Answer to Your Cash Woes. Business & Small Business.