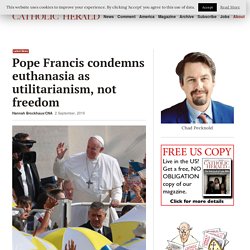 “The practice of euthanasia, which has already been legalized in several countries, only apparently aims to encourage personal freedom,” he said. “In reality,” he continued, “it is based on a utilitarian view of the person, who becomes useless or can be equated to a cost, if from the medical point of view, he has no hope of improvement or can no longer avoid pain.” “If one chooses death, the problems are solved in a sense; but how much bitterness behind this reasoning, and what rejection of hope involves the choice of giving up everything and breaking all ties!” He declared. The countries with legal euthanasia are the Netherlands, Belgium, Colombia, Luxembourg, and Canada.

5 evaluation integrity and nuclear weapons. Ethics – Utilitarianism. Alexandria Ocasio-Cortez says it is 'legitimate' for people to not want children because of climate change. Ethics for A-Level - Chapter 1. Utilitarianism - Open Book Publishers. Music snobbery is the worst kind of snobbery. 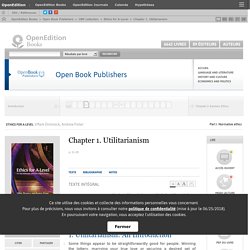 It forces people who like something a bit mainstream, a bit of pop like Girls Aloud or Take That! Or ABBA to say “It’s my guilty pleasure!” I hate that phrase. It is an insult to top quality pop. It is also an insult to guilt. 1Some things appear to be straightforwardly good for people. 2Hedonism is a theory of well-being — a theory of how well a life is going for the person living that life. 3The roots of Hedonism can be traced back at least as far as Epicurus (341–270 BC) and Ancient Greece. 4Hedonism is a relatively simple theory of what makes your life better. 5One important problem for Hedonism is that our well-being seems to be affected by more than just the total pleasure in our lives. 6 Robert Nozick (1938–2002) attacked the hedonistic idea that pleasure is the only good by testing our intuitions via a now famous thought-experiment. 1 R. 2 Ibid. 9 Jeremy Bentham (1748–1832) was the first of the “classical utilitarians”. 3 J. 7 J.

Utilitarianism Videos/Audio. Nuclear deterrence. Animal Experimentation. Model Essay - Utilitarianism. Below is a sample essay from our book on Model Essays available in the shop. 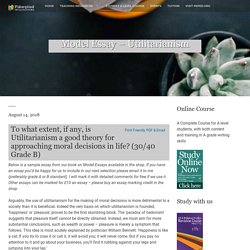 If you have an essay you’d be happy for us to include in our next selection please email it to me (preferably grade A or B standard). I will mark it with detailed comments for free if we use it. Other essays can be marked for £10 an essay – please buy an essay marking credit in the shop. Arguably, the use of utilitarianism for the making of moral decisions is more detrimental to a society than it is beneficial. Indeed the very basis on which utilitarianism is founded, ‘happiness’ or ‘pleasure’, proves to be the first stumbling block. Good. Therefore, to base one’s entire ethical approach to life on happiness, something which is so fleeting and indistinct, suddenly seems irrational. Is it not true to say we can assess polices looking backwards with hindsight because all the consequences are known, but not forwards when there are often unintended consequences? 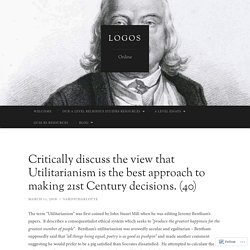 It describes a consequentialist ethical system which seeks to “produce the greatest happiness for the greatest number of people”. Bentham’s utilitarianism was avowedly secular and egalitarian – Bentham supposedly said that “all things being equal, poetry is as good as pushpin” and made another comment suggesting he would prefer to be a pig satisfied than Socrates dissatisfied. He attempted to calculate the right course of action scientifically, applying his famous “felicific calculus” where pleasure and pain were measured in relation to seven separate criteria and compared in different courses of action. Jeremy Bentham was a radical, reforming lawyer. He was also an atheist. Utilitarianism as a whole continues to struggle when it comes to predicting the outcomes of actions. In conclusion, Utilitarianism is NOT the best approach to making 21st Century decisions.