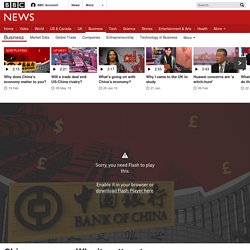 Video China economy: Why it matters to you. It is time to bill the billionaires. Let us be blunt, the World Economic Forum (WEF) happening in Davos this month will not solve the inequality crisis because its participants - the ultra-rich and powerful 1 percent - are the primary beneficiaries of the system that ravages the planet and discards the 99 percent. 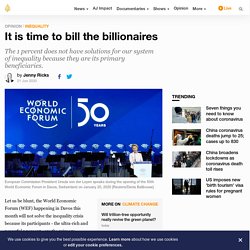 We do not need to look far to know how inequality hurts us all. Globally, inequality blights the lives of the majority of the world's population, while the wealth of the richest people continues to soar. We are truly living in an inequality crisis. Well-Being Metrics: A Reality Check for Our Growth Models. Traditional income-based metrics that measure economic growth are necessary, but they do not tell us enough on their own. 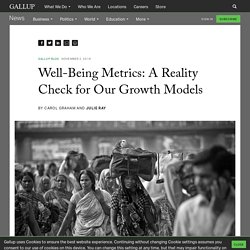 Metrics such as GDP do not explain, for example, why life expectancies in the U.S. are falling even as the stock market is booming and unemployment is dropping to new lows. Nor do they tell us why suicides are up in India when extreme poverty has fallen a lot. On top of that, these traditional income-based metrics do not guarantee growth that is inclusive and sustainable.

Mass protests expose cracks in Chile's 'economic success' story. To understand the wellspring of discontent that exploded into violent protests across Chile more than two weeks ago, one should look no further than the placards held aloft by demonstrators listing grievances from rising transport costs and student loan debt, to paltry pension payouts and tone-deaf elites. 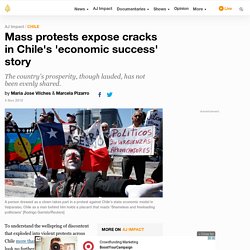 The wave of civil unrest that has so far claimed 20 lives and left thousands injured has laid bare festering resentment in a middle-income country lauded as a shining beacon of sound economic management, despite its failure to redress staggering inequality. More: Chile’s insurgency and the end of neoliberalism. The October 2019 social explosion in Chile took everyone by surprise. 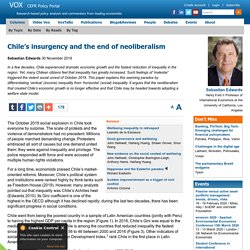 How Pinochet's economic model led to the current crisis engulfing Chile. After 12 days of mass demonstrations, rioting and human rights violations, the government of President Sebastián Piñera must now find a way out of the crisis that has engulfed Chile. 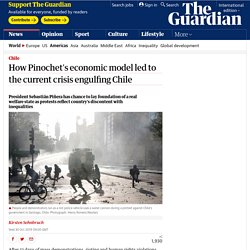 Analysts have correctly interpreted the wave of protests as a reflection of discontent with the material, political and social inequalities engendered by the economic model imposed by the country’s former dictator Augusto Pinochet. That model deregulated markets and privatised social security systems, and was widely emulated by other countries in the region. Now the Piñera government has the chance to transform the exhausted Chilean model and lay the foundation of a real welfare state, giving Chile a chance to become a genuinely developed country – not one which has merely seen an increase in GDP per capita.

If Chile Can Erupt Over Inequality, Anywhere Can. Until just a few days ago, Chile probably looked to most people like the most stable country in Latin America, and the least likely to erupt in massive social unrest. 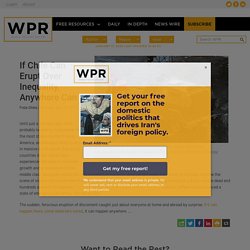 Chile's protests show economic growth is not enough. It all started with a protest over rising subway fares. 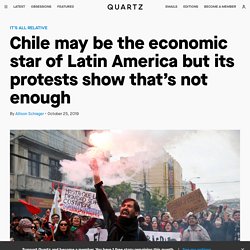 Now Chile is in the grip of violent demonstrations about the entire economic system. The grievances include the rising cost of higher education, healthcare, transportation, as well as the small pensions of retirees. Other Latin American countries’ populations are protesting, too, but Chile is surprising because it is Latin America’s economic success story. It has a sizable middle class, and has emerged as a middle-income country. Why Some Countries Are Poor and Others Rich. How can we reconcile free trade, patriotism and inclusivity? Countries everywhere face daunting socioeconomic challenges. 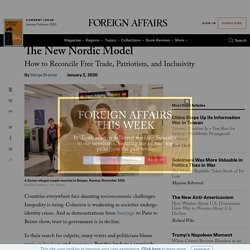 Inequality is rising. Cohesion is weakening as societies undergo identity crises. And as demonstrations from Santiago to Paris to Beirut show, trust in government is in decline. In their search for culprits, many voters and politicians blame trade, technology, and migration. But this leads to a seemingly unsolvable puzzle. South Africa's ANC to mark 108th anniversary amid blackouts. Johannesburg, South Africa - The power is off, again, in South Africa six years after the first major consumer crisis of the state-owned power company, Eskom. 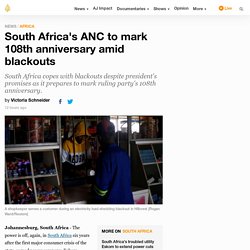 Its supporters, including the likes of the UN, OECD, national governments, businesses and even NGOs, say that sustainability can be achieved through efficiency, technology and market-led environmental action. Green growth suggests we really can have our cake and eat it – both growing the economy and protecting the planet. But when it comes to tackling the most pressing environmental problems such as climate breakdown, species extinction or resource depletion, green growth might weaken rather than strengthen progress. Why Are Poor Countries Poor? Why New Zealand Measures Success by Human Well-Being Instead of GDP Growth. Why Global Citizens Should Care The United Nations’ Global Goals call on countries to end poverty and make access to basic essentials, like food and water, universal.

Establishing equality and ensuring access to education, economic opportunities, and health care, as the Global Goals advocate, are crucial to ending poverty. Economic growth is an unnecessary evil, Jacinda Ardern is right to deprioritise it. In 2012, writing as a lone economics blogger, I put forward a case for why countries should ditch economic growth as a political priority. Long revered as a stalwart of a capitalist society the need to grow has come to overshadow everything else. We prioritise it over our personal health, we prioritise it over the health of the planet and we prioritise it over our happiness. But given that the function of any economy is to provide an environment of subsistence, that could be little short-sighted. The dark side of the Nordic model.

Scandinavians have it all. Universal public healthcare and education that is the envy of the world. Reasonable working hours with plenty of paid vacation. They have some of the highest levels of happiness on the planet, and top virtually every ranking of human development. The Nordic model stands as a clear and compelling contrast to the neoliberal ideology that has strafed the rest of the industrialised world with inequality, ill health and needless poverty. As an antidote to the most destructive aspects of free-market capitalism, the egalitarian social democracies of Norway, Denmark, Sweden, Finland and Iceland inspire progressive movements around the world.

These countries are worth celebrating for all they get right. You might not notice it at first glance. But the data tell a different story. Development Economics. The dark side of the Nordic model. Why Growth Can’t Be Green. It's time to retire metrics like GDP. They don't measure everything that matters. Democracy doesn’t matter to the defenders of ‘economic freedom’ Finance & Development, June 2016.