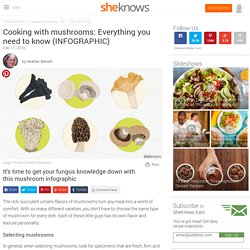 Soggy or spongy mushrooms may be on the way out. Miso Chicken Recipe. Miso Grilled Chicken Recipe – Japanese Cooking 101. You bought Miso paste, but don’t know what to do with it other than Miso Soup? 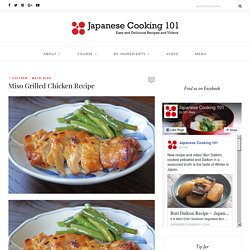 Here is an idea for a meat dish using Miso. Marinading with Miso makes chicken tender and flavorful. And as usual, it is very easy to make! Just start earlier in the day or the night before to have enough time to marinade the chicken. Miso Chicken Recipe. Grilled Chicken Thighs with Apricot-Miso Glaze — Recipes from The Kitchn. I have a confession: Until recently, I found the idea of grilling meat slightly terrifying. 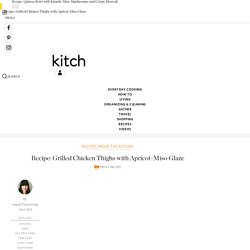 Maybe it's because I've never owned a grill of my own. Or because I usually skip over the articles about grilling in magazines. Tasteofhome. How to Make [the best] Chai [ever] - The Hathi Cooks. Chai has always been an integral part of our daily lives as well as our get togethers with friends and family. 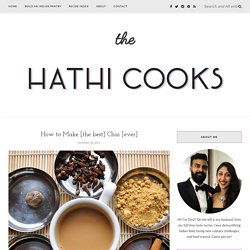 At family reunions, my father had the honorary title of “chai master” and mine was “junior chai master.” We used to joke about how when we were all sick of being doctors, we would retire and open up a small cafe called “Good Chai” and stock it with the best chai in the world and some mighty delicious snacks. That way we could continue the tradition of people coming to our house and sipping mug after mug of chai and letting their problems melt away in the delicious warmth of this wonderful drink. The Basics of Chai. Scotch Eggs. Untitled. Scotch eggs are such best bundles of joy. 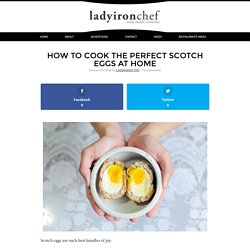 Essentially 6-minute hard-boiled eggs wrapped in minced meat before being breaded and deep fried, scotch eggs are easy to prepare, and make splendid breakfast options and picnic treats. Nothing gratifies us more than slicing through the breaded pork, adorned with a crispy golden exterior, and witnessing the translucent yolk oozing out of the egg that is beautifully encased in the meat – that is when you know you have got yourself a good scotch egg. Scotch Eggs are often served alongside sauces such as mayonnaise, mustard or even a gorgeous salad. Recipes/Tutorials: Neko Atsume butter cookies! I’ve been absolutely addicted to Neko Atsume, a cute mobile game that centers around attracting and feeding stray cats. 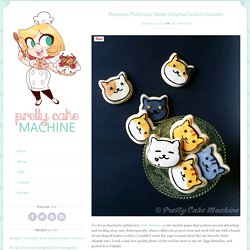 Subsequently, when a different project from last week left me with a bunch of cat-shaped butter cookies, I couldn’t resist the urge to paint them like my favorite Neko Atsume cats. I took a lazy low quality photo of the cookies next to my cat, Eggs Benedict, and posted it to Tumblr. It. Miso Ramen Recipe 味噌ラーメン. Print RecipeJump To Recipe Have you tried miso ramen before? 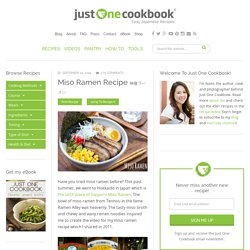 This past summer, we went to Hokkaido in Japan which is the birth place of Sapporo Miso Ramen. The bowl of miso ramen from Tenhou in the fame Ramen Alley was heavenly. The tasty miso broth and chewy and wavy ramen noodles inspired me to create the video for my miso ramen recipe which I shared in 2011. In my previous post, I mentioned about the recent ramen craze in the U.S. and a lot of JOC readers around the world commented that this craze is happening not just within the U.S. When I first came to the Bay Area close to 20 years ago, I remember there was one decent ramen shop that we used to go. Fast forward 20 years, there are gourmet ramen shops all over the Bay Area. Grandmother's Buttermilk Cornbread Recipe. 29 Ridiculously Delicious Chinese Recipes That Are Better Than Take-Out. Baked Lemon Shoyu Chicken. Alton Brown's Homemade Candy Corn Recipe. Homemade Red Bean Buns(Dou Sha Bao) Sweet red bean buns(豆沙包) is one of the most popular Chinese dessert. 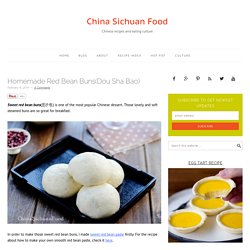 Firstly we need to make dough according to the instruction here and then cut the dough into small section. Then let’s start folding the buns. Press the wrapper with your palm and place it on your left hand. Place 1 tablespoon of the sweet red bean paste in the center of your wrapper and seal the wrapper together. Turn the buns over so that the sealed surface is underneath. Fold all the buns one by one by repeating the steps above. Homemade Chinese Red Bean Buns with soft and slightly sweet surface. 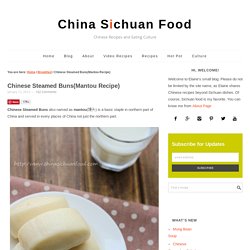 In the other parts of China, Mantou is mostly served as breakfast in restaurants and food carts. Rice Porridge Recipe (Okayu) お粥. Print RecipeJump To Recipe. 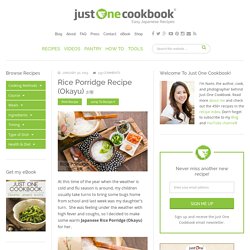 An idea simmering for centuries: Japanese 'white stew' When a Japanese person hears the word “stew,” the dish they’re likely to think of is a concoction of stewed vegetables and chicken (occasionally pork or seafood) in a creamy white sauce. Called “cream stew” or “white stew” this is a typical yōshoku dish: one with ingredients that have European-Western roots, but which is uniquely Japanese. Nimono (simmered or stewed dishes) have existed in Japan for a long time, but ones that contained meat or poultry only really entered the culinary scene during the Meiji Era (1868-1912), when the government deemed that animal-based protein was good for the health of the populace. A “shichū” (the Japanese version of the English word “stew”), described as beef or chicken nimono, first appeared on the menu of a restaurant in Tokyo in 1871, but its ingredients were still hard to come by.

While white or bechamel sauce-based dishes existed prior to World War II on the menus of fancy yōshoku, the “white stew” as we know it today was only born after 1945. Cream of Mushroom Soup Recipe. Fall is finally here and with the weather cooling down, I had a craving for something warm, rich and soul-satisfying. Making a soup can involve a lot of time, particularly one where you need to make a stock or a roux. This is the case with cream of mushroom soup, which usually needs both a vegetable stock and a roux to thicken it. Thinking there had to be a faster way to make a delicious cream of mushroom soup from scratch, I started thinking about how it could be done. Vegetable or chicken stock is usually used as the main liquid for a cream of _____ soup to impart umami.

Something about fishing ingredients from one stone pot makes it sooo warm and fuzzy inside…hey, eat vegetables too, not just the meat…we were as parents used to say to our little people… what? …no, technically, tofu is not vegetable…eat the GREEN stuff! I made this ground chicken stuffed fried tofu for hot pot one night, as usual the left over re-appeared as a remake dish the following night. Sometimes the re-make beats original. Here is Hot Pot dish we had the night before, fabulous with homemade sesame miso paste condiment. Simmered Gomoku (Five-Ingredient) "Kinchaku" Pouches Stuffed with Tofu and Ground Chicken Recipe by cookpad.japan. KitchenTigress: Matcha Cake (抹茶蛋糕) Green tea powder, aka matcha and maccha, is the soul of green tea cake. If you want to make good green tea cake, you have to use good quality green tea powder. GTP has three enemies: heat, light and oxygen. The colour and flavour deteriorate very quickly unless the tea is kept in the cold, in the dark, away from oxygen.