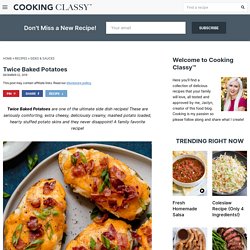 These are seriously comforting, extra cheesy, deliciously creamy, mashed potato loaded, hearty stuffed potato skins and they never disappoint! A family favorite recipe! Share on Pinterest Twice Baked Potato Recipe For as long as I can remember twice baked potatoes (aka Doubled Baked Potatoes) have been a go-to side dish in my family. My mom has always made the best twice baked potatoes and she has taught me all the tips and tricks to making them perfect! They also make delicious leftovers for lunch the next day, in the unlikely event there are any left though.

Potatoes au Gratin (Dauphinoise) Easy Chicken and Dumplings Recipe. This is the kind of food Mom used to make when the sniffles set in, and it is still a comfort food classic all these years later. 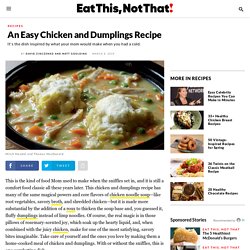 This chicken and dumplings recipe has many of the same magical powers and core flavors of chicken noodle soup—like root vegetables, savory broth, and shredded chicken—but it is made more substantial by the addition of a roux to thicken the soup base and, you guessed it, fluffy dumplings instead of limp noodles. Of course, the real magic is in those pillows of rosemary-scented joy, which soak up the hearty liquid, and, when combined with the juicy chicken, make for one of the most satisfying, savory bites imaginable.

Take care of yourself and the ones you love by making them a home-cooked meal of chicken and dumplings. Healthier Mac and Cheese Recipe. Mac and cheese: the undisputed king of comfort food. 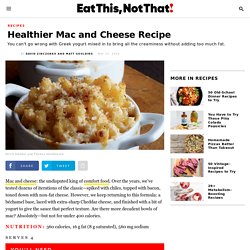 Over the years, we've tested dozens of iterations of the classic—spiked with chiles, topped with bacon, toned down with non-fat cheese. However, we keep returning to this formula: a béchamel base, laced with extra-sharp Cheddar cheese, and finished with a bit of yogurt to give the sauce that perfect texture. Are there more decadent bowls of mac? Absolutely—but not for under 400 calories. Healthy Version of the Classic Beef Stroganoff Recipe. Beef stroganoff may be Russian in name and origin, but it's since become a global go-to, finding a home everywhere from Iran to Brazil to Australia. 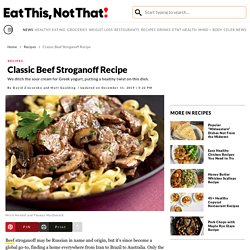 Only the best dishes inspire this type of universal love, and the ease and innate deliciousness of stroganoff is clearly why Americans have embraced it as their own. Though sour cream is normally stirred into the sauce at the last second, we tested this dish several different ways and found Greek yogurt tasted every bit as good for fewer calories. Just make sure to remove the pan from the heat before adding, as high temperatures can cause the yogurt to break, jeopardizing the smooth, velvety sauce you really want in this beef stroganoff recipe.

Nutrition: 260 calories, 7 g fat (2 g saturated), 690 mg sodium Serves 4. Healthier Classic Chicken Pot Pie Recipe. Pot pies may be one of America's favorite comfort foods, but there's nothing comforting about a dish that can swallow up an entire day's worth of calories, fat, and sodium, as many restaurant renditions do. 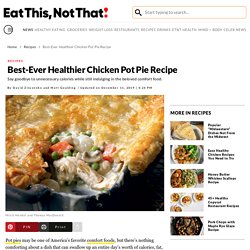 We clear out the artery-clogging fats, cut the calories by more than half, and deliver an easy chicken pot pie recipe you're bound to love. Nutrition: 350 calories, 15 g fat (8 g saturated), 650 mg sodium Serves 4 You'll Need. Easy Biscuits and Gravy (+VIDEO) Jump to Recipe This CLASSIC Biscuits and Gravy recipe is one everyone knows and loves! 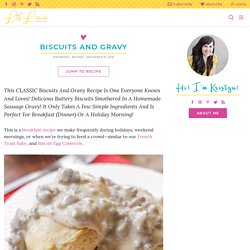 Delicious buttery biscuits smothered in a homemade sausage gravy! It only takes a few simple ingredients and is perfect for breakfast (dinner) or a holiday morning! This is a breakfast recipe we make frequently during holidays, weekend mornings, or when we’re trying to feed a crowd—similar to our French Toast Bake, and Biscuit Egg Casserole. Simple Homemade Tomato Soup Recipe. Just carrots, onions, garlic, tomatoes, broth, and bacon are all you need for homemade tomato soup. 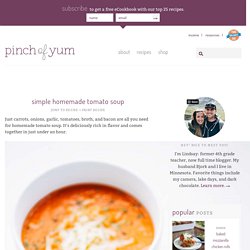 It’s deliciously rich in flavor and comes together in just under an hour. Hallooooo, March! And hallo, last month of soup weather. Right? RIGHT? I based this recipe off of the cream of tomato soup recipe in The New Classics cookbook by Saveur, because if you might remember, I got that book for Christmas and I’m working my way through it, reading it literally cover to cover. Can I blow your mind for a second? Peanut Butter Dip Recipe. Slow-Cooker Chicken Pot Pie Soup. Cranberry-Brie Puff-Pastry Pops Recipe. Roasted Mixed Nuts Recipe. Boursin Cheese with Caramelized Onions and Bacon. Italian Bruschetta Bar. Bacon, Onion and Asiago Fondue. Baked Gorgonzola Bites Recipe - Purewow. Prosciutto Bites. Baked Mac-and-Cheese Bites. French Onion Cups Snack Recipe. Brie-Stuffed Pretzel Bites Recipe. Bacon-Oyster Dressing - Louisiana Cookin.

Smoky bacon adds tons of flavor to this traditional holiday side dish. 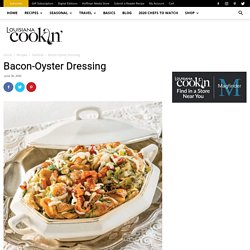 Spray a 2-quart baking dish with cooking spray. In a large saucepan, cook bacon over medium-high heat, stirring occasionally, until crispy, about 10 minutes. Crawfish Pie - Louisiana Cookin. In Louisiana, there is a strong connection between food and family. 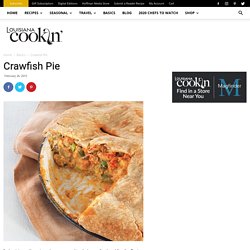 Recipes are discovered, cultivated, and passed down through the generations, becoming bright spots at gatherings and creating happy memories with the ones we love. Nell Aucoin Robarge, of Baton Rouge, inherited this recipe for Crawfish Pie from her mother, Brenda Aucoin, who adapted it from an old church cookbook. The Aucoins hail from Napoleonville, Louisiana, a tiny community on Bayou Lafourche that dates back to the 18th century. Growing up, Nell remembers enjoying the pie along with fried fish and other Cajun delicacies when extended family would come to visit. Today, she makes it on weekends, and when her children are in town and there are plenty of mouths to feed. Tony's Seafood & Deli in Baton Rouge.

Crawfish Hand Pies. Louisiana Crawfish Pie Recipe - Coop Can Cook. I think I get at least 3 emails/message requests for this recipe per day. 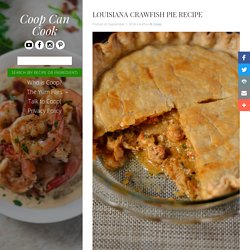 So, I won’t stall any longer. This is my Louisiana Crawfish Pie recipe! Of course, the heart of this recipe is the Louisiana Crawfish Tails! Buying them frozen is easier to come by year round. But, you have to be careful. And do NOT discard that fat! Create and egg wash and brush it across the surface of the top pie crust. New Orleans Style Crawfish Pies - Sheryl In The Kitchen. Crawfish Pie Recipe on Food52. Test Kitchen-Approved Author Notes Crawfish Pie is a double shelled savory pie filled with onions, bell pepper, celery, garlic, breadcrumbs, butter, and crawfish mixed together with milk and lots of seasonings. It's a delicacy in a very small part of the South limited mainly to Southern Louisiana and, even within that, common only to the rural areas with a greater preponderance of inhabitants with Cajun heritage. —Belle Année Serves 6. Easy Creamed Spinach.

This is by far the easiest and the best creamed spinach recipe. . Don’t chase change thing! It’s perfect, thank you Martha! Chicken Meatballs in a Creamy Peanut Sauce: Need I Say More? - Krisp x Kristin. Antipasti Frittata Recipe. Our 12 Most Popular Recipes Ever! Everything that our founder Martha touches is a fan favorite, but these 12 recipes stand the test of time—they're our most clicked on recipes and essentials that any home cook should master. Whether you just purchased your first chef's knife and are learning how to cook, or your friends nicknamed you "Martha" because you've cooked all her recipes, these classics can upgrade a weeknight dinner or make a Saturday night at home extra special. Start with Simple Crepes or Basic Pancakes—the batter for both is super simple and customizable for any toppings or fillings that you like.

They're kid-friendly and adult-approved and no fancy equipment or ingredients is needed. For the main course, try a restaurant-worthy Pan-Fried Steak, which relies on a couple pats of butter for exterior flavor. Throw in some fresh herbs like rosemary or thyme, or a few smashed garlic cloves, for a blast of aromatics during the last minute of cooking. Chicken Tortellini Alfredo. Homemade Baked Potato Skins {Crispy & Tasty} Homemade Potato Skins are one of my absolute favorite appetizer recipes! These easy baked potato skins are deliciously crispy with a garlic buttered exterior and then fully loaded with bacon, cheese and green onions! Serve these at any party for the perfect spread alongside Pigs in a Blanket, Spinach Artichoke Dip and Baked Buffalo Wings!

Spinach Madeline Recipe on Food52. Test Kitchen-Approved Author Notes The recipe was first published in 1959 by the Junior League of Baton Rouge in its first community cookbook, River Road Recipes I. —Food52 Test Kitchen Notes For the majority of my life, I was not a fan of Spinach Madeline. Serves 5 to 6 Ingredients. Bacon and Cheese Quiche Recipe. Chocolate Cream Pie Recipe. Skip links Skip to content Skip links Skip to content. Cindy's Crab Cakes (without mayo or mustard) Recipe. Submitted by: CREATIVE_MOMMA. Ham, Cheese, and Onion Empanadas Recipe.

Wilted spinach is mixed through a silky smooth white sauce, flavoured with sautéed onion and garlic, then served with parmesan cheese. This is the side dish of your dreams! Creamed spinach can be mistaken for just a bunch of spinach and heavy cream thrown together — like abracadabra — and you have creamed spinach. Well that may be a super easier version. Here is your next Thanksgiving side! Easy Creamed Spinach is delicious! This is something I grew up with…not just on Thanksgiving, but any time of the year. Easy Creamed Spinach! Easy Creamed Spinach does not get easier! Prep Time: 10 minutes Cook Time: 10 minutes Total Time: 20 minutes Servings: 4serves (as a side) Ingredients. One Pan Chicken Fajita Rice - The Girl Who Ate Everything. This One-Pan Chicken Fajita Rice is an easy Mexican dinner ready in under 30 minutes.