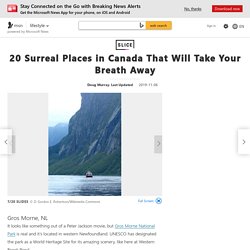 10 Fun Facts About Canada That Will Blow Your Mind. The 10 Most Canadian Insults: What You Should Never Say to a Canadian. 20 Things You Had No Idea Were Invented in Canada. Rotary snowplow, or “snowblower” Hamiza Bakirci/Shutterstock If there’s one thing Canadians know about, it’s snow. 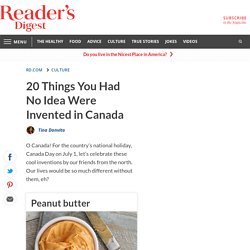 Winters in the True North can bring huge amounts of the white stuff, and eventually, people invented ways to deal with it—especially as it became necessary to clear railroad tracks of snow. So, the first rotary snowplow, which used a spinning mechanism to lift snow and shoot it away, was invented by J.W. These 5 Canadians Tried AncestryDNA—Here’s What They Discovered! 10 Must-Try Canadian Dishes (and Where to Find Them) The origins of this rich, delectable and quintessentially Canadian dish can be traced back to the late 19th century. Consisting of a delicate, crumbly crust and a creamy centre made of a butter, sugar and egg mixture, there’s constant debate over whether raisins should be added to the mix. (Our recent Reader’s Digest Instagram poll showed Canadians were evenly split on the issue, with 50 per cent supporting raisins, and the other 50 per cent opposed.) More fascinating facts about the humble butter tart: Mary F.

Williamson, a retired fine arts librarian at York University in Toronto, traced the earliest mention of the butter tart recipe to 1900 in the Royal Victoria Cook Book.Margaret MacLeod’s recipe for “filling tarts” is the first documented recipe and called for one cup of sugar, a half-cup butter, two eggs and a cup of currants.By midcentury, Eaton’s department store in Toronto included a butter tart in its boxed picnic lunches. Want to test a Canadian’s reputation for being polite? Contribute To Our Canada And Get A FREE 1-Year Gift Subscription Upon Publication!

10 Fun Facts About Canada That Will Blow Your Mind. 15 Things I Wish I’d Known Before Moving to Canada. Avro Arrow blueprints on display after sitting in Sask. man's home for decades. Thanks to an intrepid rescue more than 60 years ago, original blueprints of a famously cancelled Canadian military project are now on display at the University of Saskatchewan's Diefenbaker Canada Centre. 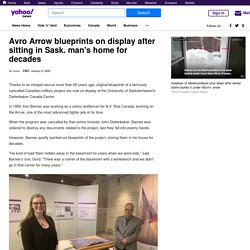 In 1959, Ken Barnes was working as a senior draftsman for A.V. Roe Canada, working on the Arrow, one of the most advanced fighter jets of its time. When the program was cancelled by then prime minister John Diefenbaker, Barnes was ordered to destroy any documents related to the project, lest they fall into enemy hands. (66) Facebook. (9) Animals of North America. Voices and sounds. (9) Best of Wild Canada (360 Video) Our Canada Theme Pic Challenge: Black and White. 25+ Spectacular Shots that Showcase the Beauty of the Canadian Winter. 25+ Spectacular Shots that Showcase the Beauty of the Canadian Winter. Photographing Wildlife at Rattray Marsh Conservation Area. Flights of Fancy: 15 Types of Birds in Canada, Captured on Camera. The 10 Most Beautiful Waterfalls in Canada. The 10 Best Places to Visit in Canada. 13 Reasons It's Great to Be Living in Canada. 20 Quirky Roadside Attractions Across Canada. JW Marriott The Rosseau Muskoka Resort & Spa.

The 10 Most Beautiful Cottage Retreats in Canada. Listed by National Geographic Traveller magazine as one of the world’s “must-see places” in 2012, Muskoka is the heart of Ontario’s cottage country. 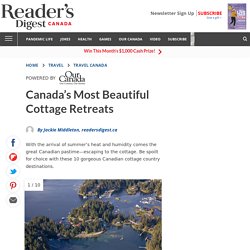 Home to over 30 public beaches and more than 1,600 lakes, Muskoka is an irresistible summer playground. Huntsville, Gravenhurst, Bracebridge, Port Carling and Bala have been popular with vacationers for over 140 years—and with good reason. The area’s rugged beauty of endless forests, pristine lakes and rocky landscapes make Muskoka the ideal getaway for sport and relaxation. Unleash your inner athlete with cycling, wakeboarding, swimming, waterskiing and tree-top zip lining, or become acquainted with timeless Muskoka pastimes such as fishing, boating and golf.

Prefer a less hectic pace? 10 Great Attractions in Canada Everyone Should Visit at Least Once. This Ontario Heritage site commemorates the life of Josiah Henson, a slave from Maryland, who escaped to Upper Canada through the Underground Railroad in 1830. 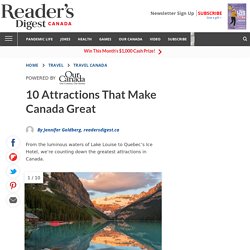 He eventually purchased land in Dresden, Ontario, and established a settlement that served as refuge for former slaves. Today, the site aims to educate visitors about African Americans who escaped slavery to settle in the area. It features an interpretive centre with 19th-century artifacts from the abolitionist era, as well as the house where the Josiah Henson lived with his family, and the structure that housed fugitive slaves.

If you’re young, healthy, and adequately employed, you may take Canada’s social safety net for granted—but if you lose your job, are injured, or become ill, you won’t be taking it for granted for long. 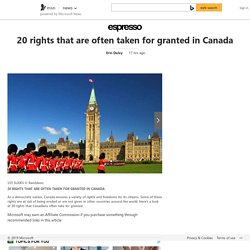 Canadians have access to a pension, income assistance, and disability benefits from the government. Canada’s welfare state came into being during the Second World War; since 1975, however, it has been eroded. Little-known facts about Canada and its weather. Nature Mixer - Mount Robson, Canada □□ 19 Things You Might Not Know Were Invented in Canada. In 1993, after more than a decade of moving from the hands of one producer to another, Jeff Maguire’s script for In the Line of Fire finally made its way to the big screen. 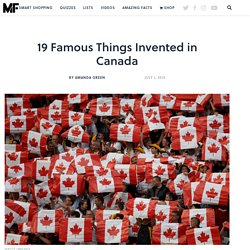 Directed by Wolfgang Petersen, the film starred John Malkovich, Renee Russo, and Clint Eastwood as a longtime Secret Service agent still harboring guilt about not being able to protect JFK—and ready to make sure another presidential assassination doesn’t happen on his watch. The cat-and-mouse game ended up earning more than $100 million at the box office, making it the seventh highest grossing film of the year. Deb Karol-Croteau. Atop the hill #explorenl #explorecanada @DestinationSJ @ParksCanada @NLtweets… Slang Words: What Do Canadians Say? Hi readers! 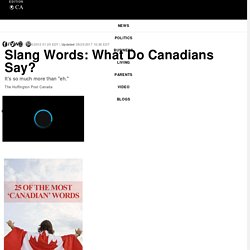 A quick note that this piece was originally published in 2013, when Canada was turning 146. In 2017, we know it's the country's 150th birthday - and are still celebrating it with a two-four and a double double. So you speak Canadian, eh? For any Canadian who travels abroad, you may hear the stereotypical "eh," "aboot" (about), or worse — how do you survive living in an igloo all year? But here, just like the diversity of our population, culture and local food we also have a long list of spoken languages, including our very own "Canadian" one. Now even though our two official languages are English and French, the country is home to more than 200 other mother tongues including the most popular ones, Mandarin, Cantonese, Punjabi and Spanish, according to a 2011 Statistics Canada report.

But between our different dialects, provinces and home-grown businesses, Canadians have also come up with their own take on everyday words. Most "Canadian" Words And Phrases. Evaporating Water in -30C in Yellowknife, NWT. Team Canada takes gold at ISU World Synchronized Skating Championships 2015. At the 2015 ISU World Synchronized Skating Championships, Team Canada took to the ice and showed the competition how it's done. 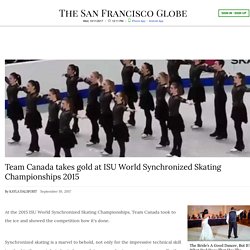 Synchronized skating is a marvel to behold, not only for the impressive technical skill involved in the sport, but also in how each team member's movements seem effortless throughout the carefully choreographed routine. Julie Payette, Former Astronaut, Is Officially Canada's 29th Governor General. OTTAWA — Former astronaut Julie Payette took the formal oaths of office Monday as she became the country's 29th Governor General in a traditional ceremony on Parliament Hill. 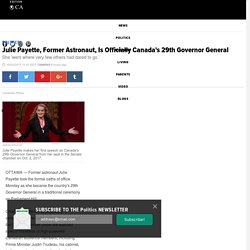 Chief Justice Beverley McLachlin administered the oaths to the 53-year-old in the Senate chamber under the watchful eyes of hundreds of high-powered Canadian audience members, including Prime Minister Justin Trudeau, his cabinet, Indigenous leaders and other dignitaries. Payette swore the oaths of allegiance of the Governor General and commander-in-chief of Canada, and of the Keeper of the Great Seal of Canada. After the oaths, cannons outside the Parliament Building crashed out a 21-gun salute, which could be heard inside. The audience included justices of the Supreme Court, former governors general, several provincial premiers and Payette's friends and family. Meet Jessica Mulroney, Meghan Markle's best friend and Canada's best-connected fashion power player  All the comforts of one's home: Rare glimpse of Queen's life at Balmoral explained.

Governor General Julie Payette’s Coat Of Arms Makes Us Really Want A Coat Of Arms. One of the greatest benefits of becoming the Governor General of Canada (other than being the technical head of state and all) has to be the earning of your very own coat of arms. The ceremonial insignia for newly installed governor general, Julie Payette, was revealed today, and it is completely delightful. Governor General Canada It also comes with a handy explainer (in video form too, if that's your preference), which points out the various details that make up its whole. Island in the Sky takes you on a... - Kove Photography. Facebook - Log In or Sign Up. Global BC - Watch the wildfire near Kelowna erupt like a... Facebook – log in or sign up.

It is the site of Hatley Castle, a Classified Federal Heritage Building. Since 1995, the mansion and estate have been used for the public Royal Roads University. The extensive grounds of the historic site have formal gardens, former farmland, and trails through mature stands of first and second-growth forest, including large Douglas fir and western red cedar. History[edit] Hatley Castle and Gardens[edit] Governor General of Canada - Wikipedia. The current governor general is David Johnston, who has served since 1 October 2010; Prime Minister Stephen Harper recommended him to succeed Michaëlle Jean.[14] Johnston's wife—who is thus the viceregal consort—is Sharon Johnston.[15]

Portrait - 150th Anniversary of Canada. New Photographic Portrait of The Queen. June 30, 2017. Passport 2017 - □□ HAPPY CANADA DAY! □□ Spectacular Photos Of Canada That Leave Us In Awe Of Its Beauty. Canada might be known as a polite nation around the world, but when it comes to natural beauty, our country is a total show-off. From lakes that feel more like oceans to mountainscapes that feel more like Mars, the diversity and enchantment of our home and native land is what literally grounds us — and Canadians can just do our best to live up to its worth. Facebook. Facebook. Facebook. Brittlestar - Neighbours - Explaining Canada Day to... How the Great White North can change the world: Canada's role in global biodiversity conservation. Aerial view of Powder Islands, Lake Superior, ON (Photo by Alan Auld) I still remember a time when thinking about conservation made me feel disappointed in Canada.

A House Near Lake Ontario Was Totally Encased In Ice. MB Gibbons - OMG... just saw this commercial.... just... AJ+ - A woman who was forcibly removed, imprisoned and... Log In or Sign Up. Twitter.