40+ Tips for Grammar and Punctuation 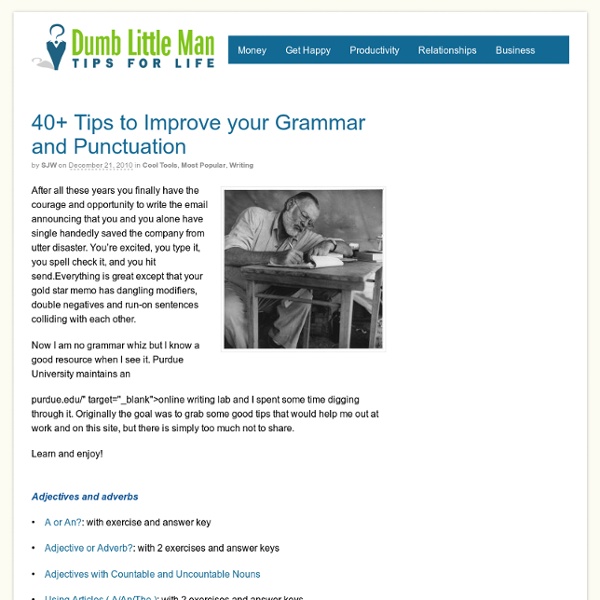 After all these years you finally have the courage and opportunity to write the email announcing that you and you alone have single handedly saved the company from utter disaster. You’re excited, you type it, you spell check it, and you hit send.Everything is great except that your gold star memo has dangling modifiers, double negatives and run-on sentences colliding with each other. Now I am no grammar whiz but I know a good resource when I see it. Purdue University maintains an purdue.edu/" target="_blank">online writing lab and I spent some time digging through it. Originally the goal was to grab some good tips that would help me out at work and on this site, but there is simply too much not to share. Learn and enjoy! • A or An? • Adjective or Adverb? • Adjectives with Countable and Uncountable Nouns • Using Articles ( A/An/The ): with 2 exercises and answer keys Nouns • A Little Help with Capitals • Count and NonCount Nouns (with Articles and Adjectives): with exercise and answer key Commas

25 Terrific Online Games for English Language Learners - Online College Courses English language learners fall into two categories — native speakers and those pursuing it via ESL/EFL instruction (or self-instruction!). But both demographics can build up their skills, no matter their age or proficiency, through game-based learning. The Internet, in its infinite providence, does not disappoint when it comes to hosting effective resources for teaching and reviewing the core components of the English language. Here’s a few particularly useful games or, more accurately in most cases, suites of games. GameZone: Dozens of simple, straightforward games about grammar, spelling, and vocabulary reach out to English language learners at all levels. Keep in mind, however, that this site is based in the U.K. and follows a different set of linguistic rules than American English.

An analysis of Hamlet, the Prince of Denmark Introduction to Hamlet Hamlet is arguably the greatest dramatic character ever created. From the moment we meet the crestfallen prince we are enraptured by his elegant intensity. Shrouded in his inky cloak, Hamlet is a man of radical contradictions -- he is reckless yet cautious, courteous yet uncivil, tender yet ferocious. 5 Simple Ways to Increase Your Intelligence Your brain needs exercise just like a muscle. If you use it often and in the right ways, you will become a more skilled thinker and increase your ability to focus. But if you never use your brain, or abuse it with harmful chemicals, your ability to think and learn will deteriorate.

As Vogais do Inglês e do Português - English &amp; Portuguese Vowel Phonemes Compared Each language makes a different use of the articulatory system and phonology is the study of the sound patterns of the language, especially its matrix of phonemes. What is a phoneme?Phoneme the smallest unit of sound in a language that serves to distinguish two words. Example 1:/pIt/ pit and /bIt/ bit are different words with different meanings. The only distinction relies on the manner of articulation of the bilabial consonant. Therefore /p/ and /b/ are different phonemes in English.

Expressions for Agreeing and Disagreeing This page is about words and phrases that we use when we agree or disagree with someone in English. Stating an opinion In my opinion...The way I see it...If you want my honest opinion....According to Lisa...As far as I'm concerned...If you ask me... Asking for an opinon A Quick Guide to Reading Shakespeare Probably the number one complaint about reading Shakespeare is that it doesn't always read like "normal" English. It's a natural and legitimate accusation. Shakespeare wrote for an audience over 400 years ago. Think about how word meanings and expressions change over a relatively short time; four centuries bring with them a lot of alterations. For instance, the history of literary English is the history of invasions, with Celtic supplanted by Anglo-Saxon, which was usurped by Norman French (and accentuated with Latin).

Grammar Girl Mignon Fogarty is the founder of the Quick and Dirty Tips network and creator of Grammar Girl, which has been named one of Writer's Digest's 101 best websites for writers multiple times. The Grammar Girl podcast has also won Best Education Podcast multiple times in the Podcast Awards, and Mignon is an inductee in the Podcasting Hall of Fame. Mignon is the author of the New York Times best-seller "Grammar Girl's Quick and Dirty Tips for Better Writing" and six other books on writing. She has appeared as a guest on the "Oprah Winfrey Show" and the "Today Show" and has been featured in the New York Times, Business Week, the Washington Post, USA Today, CNN.com, and more.