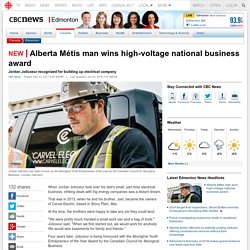 That was in 2013, when he and his brother, Joel, became the owners of Carvel Electric, based in Stony Plain, Alta. At the time, the brothers were happy to take any job they could land. "We were pretty much handed a small work van and a bag of tools," Jolicoeur said. "When we first started out, we would work for anybody. We would wire basements for family and friends. " Four years later, Jolicoeur is being honoured with the Aboriginal Youth Entrepreneur of the Year Award by the Canadian Council for Aboriginal Business. First Nations teen solves remote community's drinking water problems - Thunder Bay. Oops... 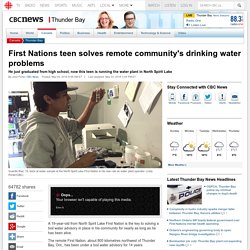 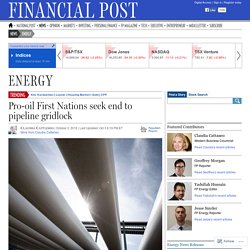 What’s not said enough is that many in fact support Canada’s oil and gas sector, are producers themselves or are benefiting from it through business partnerships and revenue sharing, and want to see pipelines move forward. At a groundbreaking conference in Calgary Monday — entitled the Pipeline Gridlock Conference, a Nation-to-Nation Gathering on Strategy and Solutions — members of Canada’s aboriginal business elite met for the first time to improve dialogue on pipelines and look for ways to support approvals. Stephen Buffalo, president and CEO of the Indian Resource Council, the conference’s organizer, said the meeting is expected to be the first of many and aims to come up with recommendations for Prime Minister Justin Trudeau.

'Can I go to school?': Sask. teen graduates school with 13-year record of perfect attendance. It was a race that took 13 years to complete, but one high school graduate in Saskatchewan has made it to the finish line with a rare accolade. 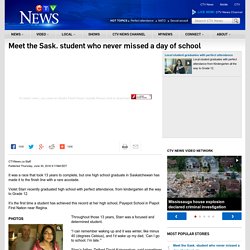 Violet Starr recently graduated high school with perfect attendance, from kindergarten all the way to Grade 12. It’s the first time a student has achieved this record at her high school, Payepot School in Piapot First Nation near Regina. Throughout those 13 years, Starr was a focused and determined student. ‘Get a damn job’: Chief offers blunt remedy for what ails First Nations. Clarence Louie says things anyone other than a respected indigenous leader couldn’t get away with. 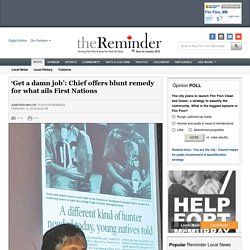 His advice to young men on his home reserve? “Get a damn job, be a man. Jobs, jobs, jobs is best strategy. Two Sask. First Nations buy majority stake in city business for a ‘win-win’ partnership. Two Saskatchewan First Nations have purchased the majority share of a Saskatoon fabricator in a move the company’s president and CEO says will benefit everyone involved. 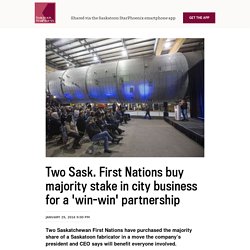 “One of the opportunities I could see was to develop a win-win by partnering with these First Nations organizations, giving them hope and opportunity to participate and to share my team’s knowledge and experience, and at the same time helping us preserve our future,” Jim Nowakowski told reporters Friday. The economic development corporations of English River First Nation and Peter Ballantyne Cree Nation have each acquired 30 per cent of JNE Welding. The terms of the agreement have not been disclosed, but JNE’s vice president of finance said the company’s annual revenue is between $35 and $40 million. Together, the three corporations employ more than 1,000 people with an annual payroll of $54 million, and have an estimated combined revenue of $296 million, according to a news release.

Manitoba First Nation's Solution To Foster Care Crisis: Remove Parents, Not Kids. Foster care has become a crisis on Manitoba's aboriginal reserves, where many children removed from their homes are also removed from their communities, winding up in urban centres like Winnipeg. 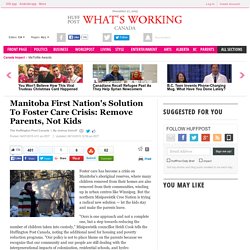 But the northern Misipawistik Cree Nation is trying a radical new solution — let the kids stay and make the parents leave. "Ours is one approach and not a complete one, but a step towards reducing the number of children taken into custody," Misipawistik councillor Heidi Cook tells the Huffington Post Canada, noting the additional need for housing and poverty reduction programs. "Our policy is not to place blame on the parents because we recognize that our community and our people are still dealing with the intergenerational impacts of colonization, residential schools, and hydro development.

The chief who said no: One Northern village rejected residential schools and built their own instead. JEAN MARIE RIVER, N.W.T. — No, they said. 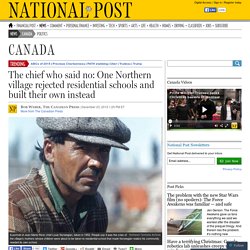 When government officials came to collect children from Jean Marie River for residential school, residents of the remote village in the Northwest Territories said they’d keep their kids at home, thanks very much. Residential schools to blame for problems plaguing aboriginals: Truth and Reconciliation Commission Modern-day Canada is perpetuating the mistakes that led to the creation of the often-abusive aboriginal residential schools more than a century ago by policies that still harm indigenous people, an exhaustive new report has concluded. The warning comes in the final report of the Truth and Reconciliation Commission, to be released Tuesday. The seven-volume report, a blistering indictment of Canada’s current approach to aboriginal issues, puts the onus squarely on political leaders at all levels to change government policies. Read more … In what may have been unique among Canadian First Nations, they decided to build their own school.

Liberal MP blasted over racist ‘sobriety’ ad, but it was written by First Nations Drum newspaper. Aboriginals deserve good financial governance. Wab Kinew: Aboriginal success is the best form of reconciliation. The Truth and Reconciliation Commission’s closing event in Ottawa showed us glimpses of Canada at its best and at its worst. 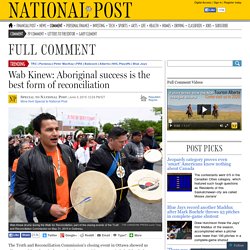 We were reminded of the dark moments in our history when Commissioner Murray Sinclair declared the residential school era to be part of a “cultural genocide” against indigenous people. Yet we were also reminded of our best, most welcoming nature when a round dance broke out in the lobby outside the event. Residential school survivors, their descendants and non-indigenous supporters danced hand in hand in a public expression of the very cultures that had been targeted for eradication. Most of the TRC’s 94 calls to action can be boiled down to a similar ethos: Let’s learn about aboriginal peoples and cultures so we can get on with the business of living together in a good way.

The gift of Membertou's Christmas. Step one: Identify highly qualified band members who used to call your community home. 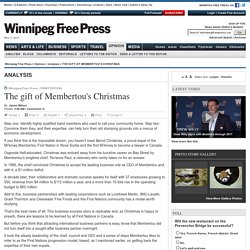 Step two: Convince them they, and their expertise, can help turn their old stomping grounds into a mecca of economic development. If you think this is the impossible dream, you haven't meet Bernd Christmas, a proud expat of the Mi'kmaq Membertou First Nation in Nova Scotia and the first Mi'kmaq to become a lawyer in Canada. Osgoode Hall-educated, Christmas was enticed away from his lucrative career on Bay Street by Membertou's longtime chief, Terrance Paul, a visionary who rarely takes no for an answer. In 1995, the chief convinced Christmas to accept the leading business role as CEO of Membertou and, with it, a $1-million deficit.

A decade later, their collaborative and dramatic success speaks for itself with 37 employees growing to 550, revenue from $4 million to $112 million a year, and a more than 10-fold rise in the operating budget to $65 million. Trades Alberta: Training program gives boost to tradespeople on First Nations communities. EDMONTON - A partnership that taps into Alberta’s aboriginal workforce is helping young people get the training they need to find and keep steady employment in the trades. “I saw a door open and I needed to go there,” says Curtis Lupaschuk, 28, a member of the Whitefish Lake First Nation who entered the Pre-Employment Construction and Pre-Employment Scaffold Training Program in his community in April 2013. The program is an initiative of union CLAC, in partnership with industry, First Nations and funding from the provincial government. Participants — mostly in their 20s and 30s — receive life skills and job readiness training, nine safety tickets, and theory and practical work in construction and scaffolding over 14 to 16 weeks.

First Nations communities doing what it takes for improved prosperity. Andrea Gerard Dorie (left), Eileen Meade, Wanda Fontaine and Todd Guimond enjoy a cup of Tim Hortons at the new Sagkeeng First Nation Tim Hortons and Superstore grocery store. First Nations communities are starting to do what it takes for improved prosperity. Photo Store. Silent no more. WINNIPEG — “Do you worry for your safety — whether you may end up like Tina or Rinelle?” A group of teenage girls — most of them strangers to one another — all raise their hands. “Do you trust the police?” Each girl shakes her head “No.” “How many of you have had loved ones disappear or get killed?” They shoot quick glances at one another. At least half say someone in their family has been sexually abused.

Aboriginal Bond Holds Promise of Breaking Resource Logjam. How a B.C. native band went from poverty to prosperity. Saskatchewan golf course helps a First Nation stay in the green. The leaders of the tiny Whitecap Dakota First Nation were talking about creating a golf course 30 years ago when Darcy Bear was still in high school. It was a grandiose dream for a dusty reserve of a couple hundred people a half hour’s drive south of Saskatoon where folks still used outhouses, homes lacked even basic foundations, the unemployment rate topped 70 per cent, and the band’s bank-account balance was preceded by a minus sign.

Matt Gurney: How a First Nations band is fixing its big welfare problem with a small solution. Fort McKay aboriginals take ‘good with the bad’ of the oil sands. Jim Boucher, chief of the Fort McKay First Nation near Fort McMurray, hasn’t been shy over the years about taking to task oil sands developers over their environmental practices. Staying true to form this week, the colourful leader implored oil companies at an annual industry gathering to celebrate industry-leading environmental, safety and social performance to get serious about cleaning up tailings ponds associated with oil mining operations. ‘We are businessmen’: First Nations entrepreneurs far from idle. Aboriginal women entrepreneurs ready to mentor peers. For modern reserves, success is in balancing tradition and capitalism.