Women-with-pelvic-mesh-complications-at-higher-risk-of-depression-suicidal-thoughts-1. A Canadian study that tracked more than 57,000 women has found patients with complications after pelvic mesh implants are at increased risk of depression, self-harm – even suicide. 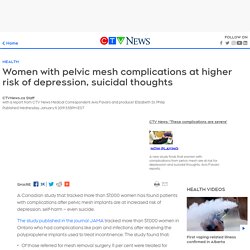 The study published in the journal JAMA tracked more than 57,000 women in Ontario who had complications like pain and infections after receiving the polypropylene implants used to treat incontinence. The study found that: Of those referred for mesh removal surgery, 11 per cent were treated for depression Meanwhile, 2.7 per cent suffered from self-harm/suicidal behavior, almost double the rate in the control group. YouTube. Health-canada-says-use-of-permanent-vaginal-mesh-should-be-restricted-1. Health Canada says non-absorbable synthetic surgical mesh should no longer be implanted in patients' vaginas when treating certain types of pelvic organ prolapse. 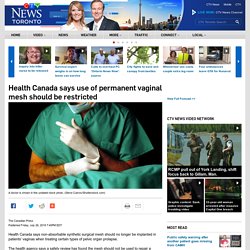 The health agency says a safety review has found the mesh should not be used to repair a prolapse of the rectum, as evidence shows that leads to an increased risk of complications. It says the mesh should only be used to repair other types of prolapse among specific patient groups, namely those who have recurring pelvic organ prolapses or are unable to under other surgical treatments. The agency says pelvic organ prolapse occurs when weak or damaged pelvic floor muscles and tissues allow organs such as the bladder or uterus to bulge into the vaginal wall.

Non-absorbable synthetic mesh is meant to be permanently implanted to reinforce the vaginal wall for prolapse repair. They have either cancelled their licences or intend to do so shortly, it says. Transvaginal mesh pulled from Canadian market following safety review. Surgical mesh implants used to treat women's pelvic organ problems are being removed from the Canadian market following a safety review by Health Canada. 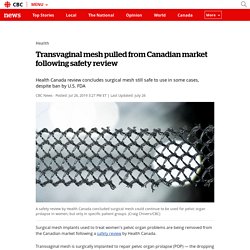 Transvaginal mesh is surgically implanted to repair pelvic organ prolapse (POP) — the dropping of the bladder, uterus, bowel or rectum from its normal position due to weakened or damaged tissue. Health Canada acknowledged that some women who had the mesh implanted experienced debilitating side-effects, including abdominal pain, pain during sex, repeated infections, organ perforation, nerve damage and the mesh breaking apart. The department announced it would review the safety of the mesh following an international investigation by media that included CBC News, Radio-Canada, the Toronto Star and the Washington-based International Consortium of Investigative Journalists. That decision falls short of the U.S. The companies include Boston Scientific, Cousin Biotech and Coloplast A/S. ‘They should be better warned’: Canadian doctor on breast implant risks - Winnipeg. For years Nikki Carruthers has been dealing with pain, mysterious illnesses and dozens of unexplained symptoms. 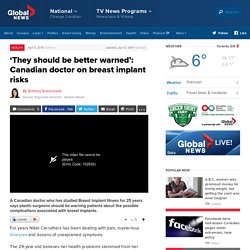 The 29-year-old believes her health problems stemmed from her silicone breast implants, which she had removed in 2018 after five years. “One of them was ruptured in four places,” she told Global News. “The other one had capsular contracture as bad as you can get. The silicone basically migrated everywhere.” READ MORE: ‘I was on death’s doorstep’: Winnipeg woman says breast implants ruined her health, her life. Women-with-pelvic-mesh-complications-at-higher-risk-of-depression-suicidal-thoughts-1. CTVNews.ca Staff, with a report from CTV News Medical Correspondent Avis Favaro and producer Elizabeth St. 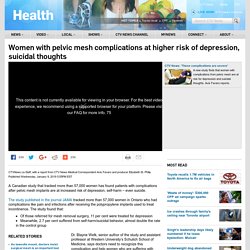 Philip Published Wednesday, January 9, 2019 5:55PM EST A Canadian study that tracked more than 57,000 women has found patients with complications after pelvic mesh implants are at increased risk of depression, self-harm – even suicide. Inside the terrifying world of faulty medical implants - CityNews Edmonton. There are broken devices doing important jobs in the bodies of Canadians right now. 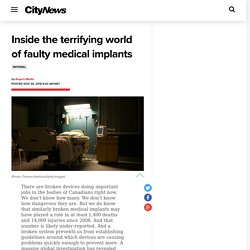 We don’t know how many. We don’t know how dangerous they are. But we do know that similarly broken medical implants may have played a role in at least 1,400 deaths and 14,000 injuries since 2008. And that number is likely under-reported. Health minister vows to strengthen oversight of medical devices after investigation reveals problems. Canada's health minister says she is "deeply concerned" by problems with medical devices that have been revealed by investigative journalists and has pledged to make changes. 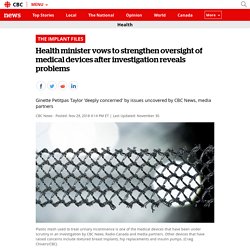 "The government of Canada agrees that more can be done to further strengthen the oversight of medical devices and to be more open and transparent with Canadians about Health Canada's regulatory activities," Health Minister Ginette Petitpas Taylor said in a statement on Thursday afternoon. "I have directed Health Canada to bring forward an action plan to accelerate these efforts on a priority basis and to work with partners on behalf of Canadians. " Her statement comes in the midst of a series of stories detailing injuries and deaths that have resulted from a variety of medical devices — including plastic meshes, breast implants, pacemakers, hip replacements and insulin pumps — as well as highlighting gaps in Health Canada regulations and enforcement of such devices.

"This is just a general statement. Faulty and unproven medical devices implanted in Canadian patients despite known risks. Medical devices pulled from the market in other countries because of health risks continued to be implanted into unwitting Canadians — sometimes with tragic results. 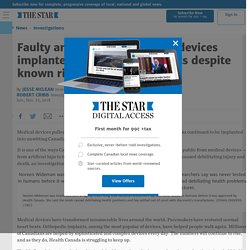 It is one of the ways Canada lags behind many other countries in protecting the public from medical devices — from artificial hips to breast implants to implantable defibrillators — that have caused debilitating injury and death, an investigation by the Toronto Star/CBC/Radio-Canada has found. Medical devices have transformed innumerable lives around the world. Surgical mesh implants may cause autoimmune disorders. I-have-tried-to-end-my-life-hernia-mesh-patients-overwhelmed-by-pain-1. Several women who have had hernias repaired with plastic surgical mesh say the subsequent pain they have endured has driven them to contemplate -- and sometimes even attempt -- suicide. 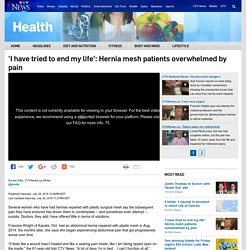 Doctors, they add, have offered little in terms of solutions. Francine Wright of Kanata, Ont. had an abdominal hernia repaired with plastic mesh in Aug. 2014. Six months later, she says she began experiencing abdominal pain that got progressively worse over time. Judge rules Health Canada cannot withhold clinical trial data. A federal court judge ruled this week that Health Canada cannot withhold clinical-trial data from a researcher who refused to sign a confidentiality agreement, a decision that could pave the way for greater transparency at the department. 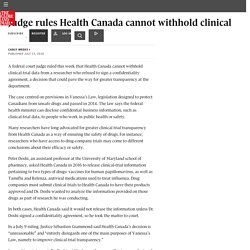 The case centred on provisions in Vanessa’s Law, legislation designed to protect Canadians from unsafe drugs and passed in 2014. The law says the federal health minister can disclose confidential business information, such as clinical-trial data, to people who work in public health or safety. Many researchers have long advocated for greater clinical trial transparency from Health Canada as a way of ensuring the safety of drugs.

For instance, researchers who have access to drug-company trials may come to different conclusions about their efficacy or safety. Story continues below advertisement. W5: How safe are surgical mesh implants? W5 on the Go: Mesh Misgivings. Risks from surgical mesh in hernia repair too high, Canadian surgeon says. Last updated 18:07, January 14 2018 Leading Canadian hernia surgeon Robert Bendavid says a Kiwi counterpart is wrong to say using mesh is "safe and effective". A leading Canadian hernia surgeon says the risk of complications from surgical mesh is too high and its use in New Zealand should be restricted. Surgical mesh made with polypropylene is used routinely in New Zealand hernia procedures to strengthen weakened abdominal walls.

About 5000 procedures take place each year. Woman-appeals-to-ottawa-for-temporary-ban-on-female-pelvic-mesh-1. A woman harmed by transvaginal mesh has filed a petition to the House of Commons in Ottawa, demanding tougher regulations on plastic mesh used inside the human body. The e-petition was launched by Nonie Wideman, who suffered complications from mesh implanted in 2011 to treat stress urinary incontinence. Wideman developed pain and severe fatigue, later discovering bits of blue plastic mesh were poking out of her vagina and urethra, with some ending up in her urine.

Search-ctv-news-7. Doctors weren't properly informed of vaginal mesh. A company owned by a multi-billion pound pharmaceutical failed to fully inform doctors of how dangerous vaginal mesh can be, a BBC Panorama investigation has found. The programme, airing tonight, will also reveal how an implant made by Ethicon was only tested on 31 women and in sheep before being used in patients.

The company, owned by Johnson and Johnson, sells its scandal-hit products in the UK under the brand name Gynecare TVT. An investigation reveals how a director at the company asked for the wording to be changing in the safety leaflets for mesh implants to recognise the dangers - but her request was ignored. It comes amid mounting pressure for the ban of controversial vaginal mesh implants, which have left thousands of women on the brink of suicide.

Inadequate-surgical-mesh-regulation-put-women-at-risk-experts-1. A new report concludes that transvaginal mesh products used to help treat incontinence and organ prolapse were approved on the basis of weak evidence and “may have exposed women to avoidable harms.” Researchers writing in the BMJ medical journal say regulatory “failings” enabled the devices to be brought to market without good evidence to show the products were safe. Vaginal mesh has been used for close to 20 years to treat urinary incontinence as well as pelvic organ prolapse (POP), a condition in which the muscles that hold pelvic organs become weak from childbirth or age. While thousands of women have had no problems with the mesh, thousands of others have complained about serious complications, including painful and seemingly never-ending bacterial infections.

More than 100,000 lawsuits have been launched over the meshes. Prominent vaginal mesh campaigner, 42, DIES from sepsis. A prominent vaginal mesh campaigner has died from sepsis which was triggered by her controversial implant, it has been reported. Christina Brajcic, 42, from Ontario, Canada, passed away on Thursday following a four-year battle with persistent infections - as a result of her mesh.

During her final few months, she posted an array of videos detailing her struggle with the scandal-hit devices on her Facebook page. Tributes have flooded in for the 'courageous' interior designer, who helped to raise awareness of the 'catastrophic' mesh, which leaves many in crippling pain. The implants, which can shrink, twist, curl and cut through internal tissue, have ruined the lives of thousands of women, leaving some on the brink of suicide.