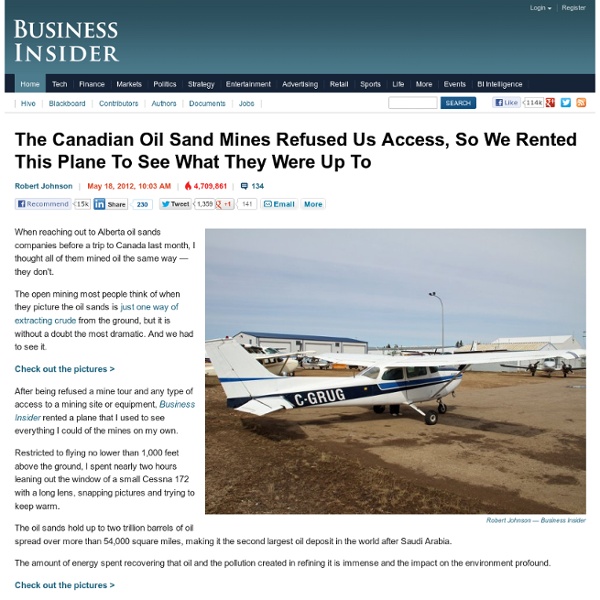 Foreign investment a threat to oilsands: Green Party leader - Fort McMurray Today - Alberta, CA Foreign influence in Canada's oilsands, particularly from China, might be the most important issue facing Canada's sovereignty and security that the federal government isn't talking about, says Green Party leader Elizabeth May. In an interview with the Today, May said Canadians should be worried that the country's energy sector has gladly accepted billions of dollars in investments from Chinese state-owned companies, and ask whether or not their presence in Alberta's oilsands affects Canada's foreign policy. Canada has spent the last decade wooing China with Alberta's vast oil reserves in an attempt to turn the oil-thirsty Asian superpower with deep pockets into a frequent customer. However, May argues security advisors to the Canadian government have shown concern about China's growing economic prowess in Canada, but the issue has been ignored by the Tory government. "It's naive to think there's no difference between Sinopec or PetroChina and Imperial Oil or Exxon," says May.

Ban Hydraulic Fracturing for natural gas in Ireland Petition Target: Irish Government Petition Background (Preamble): We are calling on the Irish Government to immediately ban the process known as Hydraulic Fracturing (fracking) in Ireland. Hydraulic fracturing is the method used for the extraction of natural gas (shale gas) from the ground. This horizontal drilling process involves the pumping of millions of gallons of water, mixed with hundreds of highly toxic chemicals, thousands of feet deep into the ground. Already in the U.S.A and Australia, pollution caused by this process to land, to air, to surface water and to groundwater has resulted in a terrible health toll and catastrophic environmental damage. A litany of serious ‘fracking’ related health problems for people in communities in areas where this technology has been used have also come to light. The U.S. If hydraulic fracturing is allowed the aftermath may be an irreversible disaster for us and our environment. 1. There are also a number of Facebook pages and groups on fracking in Ireland.

The age of extreme oil: ‘This used to be a forest?' One grey Thursday at the end of April, a plane touched down in Fort McMurray, Alta., carrying four Achuar Indians from the Peruvian Amazon. They had flown 8,000 kilometres from the rain forest to beseech Talisman Energy Inc., the Calgary-based oil and gas conglomerate, to stop drilling in their territory. Talisman's annual general meeting was coming up, and the Achuar were invited to state their case to chief executive officer John Manzoni in front of the company's shareholders. But first, they wanted to see a Canadian oil patch for themselves, and meet the aboriginal people who lived there. Their host in Fort McMurray was Gitzikomin Deranger, Gitz to his friends – a 6-foot-4 Dene-Blackfoot activist who lives in a comfortably cluttered duplex with his parents and a revolving assortment of relatives. “Did you kill the bird to get it?” “No,” Mr. “Condor feathers are sacred for us too, but we never pick them off the ground,” Mr.

Killing Environmental Science There has been no announcement of the devastating decision to stop studying the natural world, but the evidence is piling up that such a decision has been taken. It is no secret that Stephen Harper is uninterested in science. One of his first decisions was to unburden himself of the Science Advisor to the Prime Minister. Cuts to climate science have been clear for more than a year. Also last year, cuts in Environment Canada seemed directed to anything with the word climate attached. This year, the cuts are coming thick and fast. The PEARL facility (the Polar Environmental and Atmospheric Research Laboratory) on Ellesemere Island is to close. Then came the announcement that the Experimental Lakes Area near Kenora, Ontario is to close. Next up, cuts at NSERC (Natural Sciences and Engineering Research Council of Canada) mean that the Yukon Research Lab at Yukon College in Whitehorse is also to close. Then there are the personnel cuts. We do not know where the axe will fall next.

Redford calls Alberta oil spill an ‘exception’ as cleanup continues People downstream of an oil pipeline breach in west central Alberta are worried but hopeful the spill won’t seriously damage the Red Deer River they depend on for water and recreation. Andrew Van Oosten and his friends were hoping to go fishing Saturday but were told by Alberta Environment officials to stay away from the water. “I was going to go fishing but they said, ‘No, you’re not allowed,’” he said as huddled with his friends underneath a tarp at his campsite near the Gleniffer reservoir. “You are not allowed to go near the water because it (oil) is washing up on shore. Out on the lake that provides the water supply for the City of Red Deer and other communities downstream from Thursday’s spill, crews were busy spreading booms across the surface to skim away any sour crude. Plains Midstream Canada estimates as much as 475,000 litres of oil spilled and then leaked into the river. “We deeply regret any impact this incident may have on local residents,” the news release stated. Mr. Ms.

Oil sands Tar sandstone from California, USA. Oil sands, tar sands or, more technically, bituminous sands, are a type of unconventional petroleum deposit. Oil sands reserves have only recently[when?] been considered to be part of the world's oil reserves, as higher oil prices and new technology enable profitable extraction and processing. Oil produced from bitumen sands is often referred to as unconventional oil or crude bitumen, to distinguish it from liquid hydrocarbons produced from traditional oil wells. The crude bitumen contained in the Canadian oil sands is described by the National Energy Board of Canada as A highly viscous mixture of hydrocarbons heavier than pentanes which, in its natural state, is not usually recoverable at a commercial rate through a well because it is too thick to flow.[5] Making liquid fuels from oil sands requires energy for steam injection and refining. History[edit] The name tar sands was applied to bituminous sands in the late 19th and early 20th century.

As deadline nears, friends and foes of Keystone XL pipeline step up campaigns The pipeline, which requires a federal permit from the State Department because it crosses an international border, has been under review for more than three years. In early November, the administration delayed making a national interest determination on the pipeline on the grounds that it needed to avoid crossing sensitive terrain in Nebraska’s Sand­hills region. At the time, officials predicted that the process of rerouting the pipeline and the subsequent environmental review would extend the permitting process into early 2013. But language inserted in last month’s payroll tax extension forces President Obama to make a decision by Feb. 21. Administration officials have said that the truncated timeline makes it difficult to complete a review of whether the pipeline is in the national interest, given the fact TransCanada has yet to outline an alternate route. “I think the timing is just unfortunate, because we’re close to an election,” Engler said. In the meantime, House Speaker John A.

Microsoft goes green: data centers, offices to be carbon neutral come July This summer, Microsoft is launching a new green energy initiative in which all of the company's direct operations, "including data centers, software development labs, air travel, and office buildings," will go carbon neutral. The program will begin in July, at the start of Microsoft's 2013 fiscal year, and includes a company-wide carbon fee, whereby various divisions will be held accountable for their own energy usage. "We recognize that we are not the first company to commit to carbon neutrality," said Microsoft Chief Operating Officer Kevin Turner in a blog post early this morning, "but we are hopeful that our decision will encourage other companies large and small to look at what they can do to address this important issue." Other technology companies have made similar promises to reduce energy usage and carbon emissions in recent years. Bernard listed a number of Microsoft strategies at offices worldwide that have contributed to reductions in carbon emissions.

Canada News: Tim Hudak: Ontario should develop Ring of Fire like oilsands The mineral rich Ring of Fire is Ontario’s “oilsands” and the province should take a page out of Alberta’s playbook by developing it quickly, says Progressive Conservative Leader Tim Hudak. The Tory leader visited the remote Ring of Fire area, located nearly 500 kilometres northeast of Thunder Bay, on Monday with other Tory MPPs to survey the swampy earth said to hold more than a $30 billion haul of chromite — the key material used to make stainless steel. “In many ways, the Ring of Fire is Ontario’s oilsands — an enormous wealth beneath the earth that can break open a new frontier for job creation and investment in our province. Sometimes we look (with) wonder and awe at what Alberta can do; we can do that in Ontario and we can do that with the Ring of Fire,” said Hudak. The same toxic material that Erin Brockovich discovered in the water of a small California town, chromium-6, could pollute northern Ontario due to chromite mining in the Ring of Fire, documents obtained by the Star show.