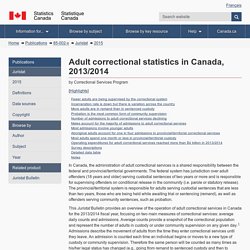 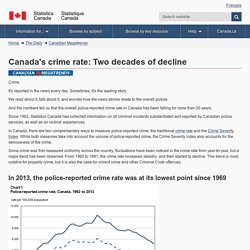 It's reported in the news every day. Sometimes, it's the leading story. We read about it, talk about it, and wonder how the news stories relate to the overall picture. And the numbers tell us that the overall police-reported crime rate in Canada has been falling for more than 20 years. Tables by subject: Crime and justice. Bureau of Justice Statistics Criminal Justice System Description. What is the sequence of events in the criminal justice system? 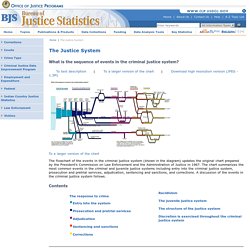 To text description | To a larger version of the chart | Download high resolution version (JPEG - 1.3M) Drug Addiction Treatment in the Criminal Justice System. Drug Use, Crime, and Incarceration The connection between drug use and crime is well known. 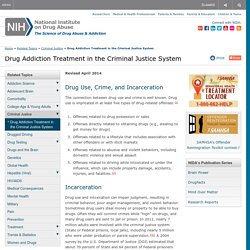 [ii] Incarceration Drug use and intoxication can impair judgment, resulting in criminal behavior, poor anger management, and violent behavior. Most prisoners serving time for drug-related crimes were not arrested for simple possession. Simple possession is even less of a factor with crimes related to marijuana. Drug Abuse Treatment. A Comparative Analysis of Youth Justice Approaches. A Report Prepared for the Review of the Roots of Youth Violence Tullio Caputo and Michel ValléeCentre for Initiatives on Children, Youth and Community Carleton University This is one of four papers commissioned in the fall of 2007 by the Ontario Review of the Roots of Youth Violence. 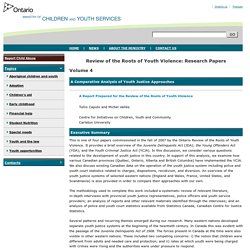 It provides a brief overview of the Juvenile Delinquents Act (JDA); the Young Offenders Act (YOA); and the Youth Criminal Justice Act (YCJA). In this discussion, we consider various questions related to the development of youth justice in this country. In support of this analysis, we examine how various Canadian provinces (Québec, Ontario, Alberta and British Columbia) have implemented the YCJA. The Canadian justice system is so broken it's criminal. After reading about that justice of the peace down there in Louisiana last week who refused to marry an interracial couple on moral grounds, I was feeling pretty smug and happy about not being American, as we Canadians so often do. 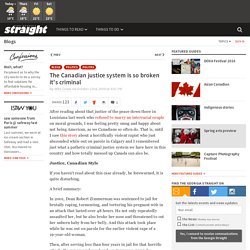 That is, until I saw this story about a horrifically violent rapist who just absconded while out on parole in Calgary and I remembered just what a pathetic criminal justice system we have here in this country and how totally messed up Canada can also be. Justice, Canadian Style If you haven't read about this case already, be forewarned, it is quite disturbing. A brief summary: In 2001, Dean Robert Zimmerman was sentenced to jail for brutally raping, tormenting, and torturing his pregnant wife in an attack that lasted over 48 hours.

He pleaded guilty to sexual assault involving a weapon and forcible confinement and was sent away for—wait for it—40 whole months in federal prison. Yes, that's right, forty months. It's not just the courts though. Juvenile Justice Systems. On 7 July 1982, Parliament enacted the Young Offenders Act (effective April 1984, some sections not until 1985), which the government claimed would bring about a long-overdue reform of Canada's juvenile justice system. 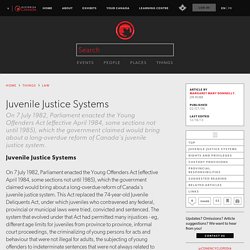 Juvenile Justice Systems On 7 July 1982, Parliament enacted the Young Offenders Act (effective April 1984, some sections not until 1985), which the government claimed would bring about a long-overdue reform of Canada's juvenile justice system. This Act replaced the 74-year-old Juvenile Deliquents Act, under which juveniles who contravened any federal, provincial or municipal laws were tried, convicted and sentenced. The Main Theme of the Young Offenders Act is that, although young people should be held responsible for their behaviour, they nevertheless have special needs which require special efforts at rehabilitation. At the same time, they should have the same right as adults to fair and equal treatment before the law. Corrections and the Criminal Justice System. Role of the Correctional Service of Canada The Correctional Service of Canada (CSC) is the federal government agency responsible for administering sentences of a term of two years or more, as imposed by the courts. 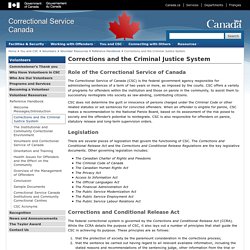 CSC offers a variety of programs for offenders within the institution and those on parole in the community, to assist them to successfuly reintegrate into society as law-abiding, contributing citizens. CSC does not determine the guilt or innocence of persons charged under the Criminal Code or other related statutes or set sentences for convicted offenders. When an offender is eligible for parole, CSC makes a recommendation to the National Parole Board, based on its assessment of the risk posed to society and the offender’s potential to reintegrate.

CSC is also responsible for offenders on parole, statutory release and long-term supervision orders. Legislation. Discover Canada. The Canadian justice system guarantees everyone due process under the law. 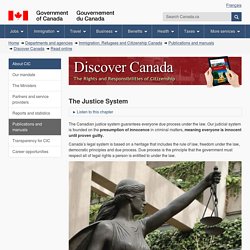 Our judicial system is founded on the presumption of innocence in criminal matters, meaning everyone is innocent until proven guilty. Canada’s legal system is based on a heritage that includes the rule of law, freedom under the law, democratic principles and due process. Due process is the principle that the government must respect all of legal rights a person is entitled to under the law. Scales of Justice, Vancouver Law Courts. Women and the Criminal Justice System. By Tina Hotton Mahony Data on annual admissions to shelters are under revision due to incorrect reporting by a survey respondent. 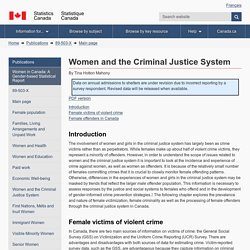