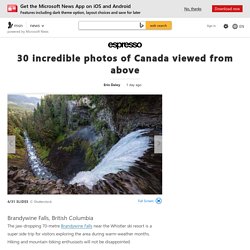 Closed windows b4 sleep & saw this stunning view of the #CanadianRockies! #GoodNight frm @Space_Station #YearInSpace. Quotes that'll make you proud to be Canadian. The Contest For Most Canadian Photo Of All Time Is Officially Over. Unanimous ruling says Ottawa has jurisdiction over all indigenous people - Aboriginal - CBC. Canada's top court has ruled that tens of thousands of Métis and non-status Indians are now under the jurisdiction of the federal government, in a decision that the prime minister says will have "broad consequences and impacts. 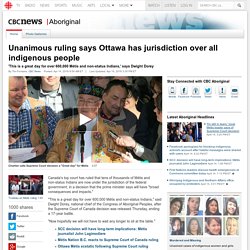 " "This is a great day for over 600,000 Métis and non-status Indians," said Dwight Dorey, national chief of the Congress of Aboriginal Peoples, after the Supreme Court of Canada decision was released Thursday, ending a 17-year battle. "Now hopefully we will not have to wait any longer to sit at the table. " In the unanimous ruling, which may serve now as a starting point for those pursuing land claims and additional government services, the court held that non-status Indians and Métis are considered "Indians" under Section 91(24) of the 1867 Constitutional Act. "This is a landmark ruling that will have broad consequences and impacts," said Prime Minister Justin Trudeau, adding that the government will need to study what those impacts might be.

The average Australian wedding now costs $65,000, but that is loose change for some extravagant couplesFor the most lavish weddings, there are budgets of $1 million for the flowers aloneDiva demands range from commissioning FIVE designer dresses to requests for monkey ring bearersWedny El Khoury of Wedded Wonderland has seen some of the most opulent nuptials and shares them with FEMAIL By Andrea Magrath For Daily Mail Australia Published: 21:16 GMT, 7 June 2015 | Updated: 03:38 GMT, 9 June 2015 The average Australian wedding now costs $65,000, according to recent studies... but these are certainly not your average weddings. 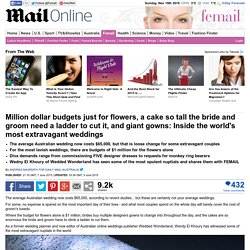 For some, no expense is spared on the most important day of their lives - and what most couples spend on the whole day will barely cover the cost of groom's tuxedo. Where the budget for flowers alone is $1 million, brides buy multiple designers gowns to change into throughout the day, and the cakes are so enormous the bride and groom have to climb a ladder to cut them. Japan Overseas Cooperation Volunteers. Winter Sunset, Alaska. Marble Caves of Lago Carrera, Chile. Background on Tonight's Launch. A lot about how things work in space is counter-intuitive, as all of our intuition is gained from daily experiences where the air is thick, gravity doesn't seem to change and movement is relatively slow. 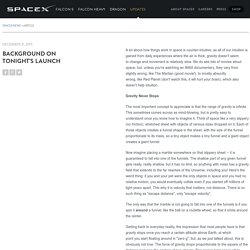 We do see lots of movies about space, but, unless you're watching an IMAX documentary, they vary from slightly wrong, like The Martian (good movie!) , to mostly absurdly wrong, like Red Planet (don't watch this, it will hurt your brain), which also doesn't help intuition. ​ Gravity Never Stops The most important concept to appreciate is that the range of gravity is infinite. This sometimes comes across as mind-blowing, but is pretty easy to understand once you know how to imagine it. Now imagine placing a marble somewhere on that slippery sheet -- it is guaranteed to fall into one of the funnels.

The only way that the marble is not going to fall into one of the funnels is if you spin it around a funnel, like the ball on a roulette wheel, so that it orbits around the center.