The history of Canadian slavery goes back 400 years, except we’re blind to it. It is not common knowledge, but it should be: there is a centuries-long and ugly history of slavery north of the 49th parallel. 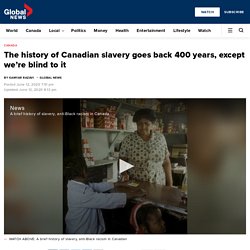 The Underground Railroad, a secret network that brought 30,000 enslaved men, women and children to relative freedom starting in the mid-1800s, is often associated with slavery in Canada. However, slavery here predates the Railroad by at least 200 years. It’s a trauma dating back to the settlement of New France, in what is now Canada, and one that continued well after Britain’s conquest of New France in 1759. 3:08 Living In Colour: The history of anti-Black racism in Canada “The enslavement of African peoples, the enslavement of Indigenous peoples, took place in this country in the same way it did in the United States, in the Caribbean and across Central and South America,” says Dr.

Story continues below advertisement 5:11 Petition calls for more anti-Black racism teaching in Alberta schools. There's a massive free catalogue of Indigenous films online — and we have 6 picks to get you started. Last month, the National Film Board of Canada launched Indigenous cinema, an extensive online library of over 200 films by Indigenous directors — part of a three-year Indigenous Action Plan to "redefine" the NFB's relationship with Indigenous peoples. 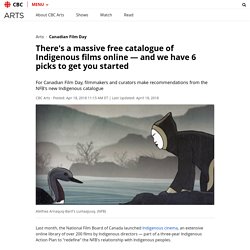 To celebrate Canadian Film Day, we asked Indigenous filmmakers and film programmers to go through the library and recommend a film. There's a massive free catalogue of Indigenous films online — and we have 6 picks to get you started. Canada reveals names of 2,800 victims of residential schools. Image copyright Getty Images For more than a century, they were anonymous. 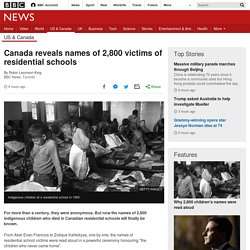 But now the names of 2,800 indigenous children who died in Canadian residential schools will finally be known. From Abel Evan Francois to Zotique Kahkikyas, one by one, the names of residential school victims were read aloud in a powerful ceremony honouring "the children who never came home". It took more than a decade for researchers to identify nearly 3,000 children who died in Canada's residential schools - compulsory boarding schools run by the government and religious authorities during the 19th and 20th Centuries with the aim of forcibly assimilating indigenous youth. Canada to Pay Millions in Indigenous Lawsuit Over Forced Adoptions - The New York Times. Strange Days: A Canadian in TrumpLand – Human Parts – Medium. Living just a few short miles north of the border, the United States has always been a huge part of my life. 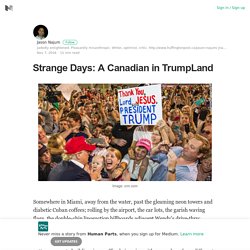 Family vacations, road trips, and broadcasting on the ABC and NBC feeds from Vermont and upstate New York, occasionally interrupted by campaign ads for a dashing young Bernie Sanders running for Senate — the TV shows, movies, sports, and general ethos that helped shape my childhood. Driving through your average Canadian town you would be hard-pressed not to think you were driving through your average American town. Canada's multiculturalism is no model for Europe. Multiculturalism is to Canada as the welfare state is to Britain: Canadians view their multicultural model as distinct from the European version, and as suffering from none of the defects of the latter. 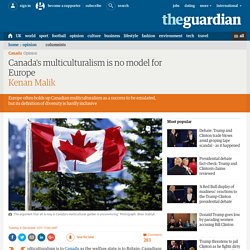 Many Europeans do so, too, seeing in the Canadian model the answer to Europe's multicultural problems. Last month I was invited to give a talk on immigration and citizenship in Europe to a Trudeau Foundation conference in Nova Scotia. For someone like me, a European in favour of mass immigration but critical of multiculturalism, it was a fascinating experience. The Fading Case Against Canadian Multiculturalism  In pluralistic democracies like Canada, there is rarely agreement around the definition of Canadian identity. 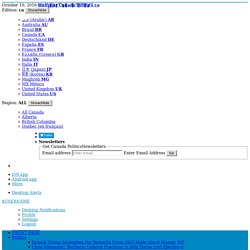 In part this is because there are several ways to express Canadian identity. Being Canadian can mean different things to different people. Therefore, it is probably more fitting to talk about Canadian cultures and identities in the plural. As such, it's perfectly normal for there to be continued conversation about "who we are" as a people(s). Some observers insist upon the importance of defining "us" in some singular way so that newcomers know precisely into what they're being asked to integrate. Although the debate about who we are dates backs a few centuries, we need to go back to 1971 to comprehend the contemporary basis for this discussion. Although the term multiculturalism has remained broadly popular, its application has been the object of ongoing controversy. Several critics of multiculturalism will describe such views as naïve. Justin Trudeau pledges reconciliation in Canada after Aboriginal abuse. Justin Trudeau has pledged to work towards full reconciliation with Canadian Aboriginals as he accepted a final report on the abuses of the government’s now-defunct system of residential schools for indigenous children. 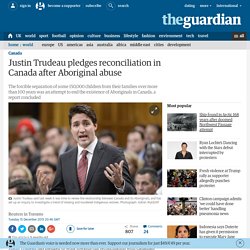 The forcible separation of some 150,000 children from their families over more than 100 years was an attempt to end the existence of Aboriginals as distinct legal, social, cultural, religious and racial entities in Canada, the long-awaited report by the Truth and Reconciliation Commission of Canada concluded. “Our goal, as we move forward together, is clear: it is to lift this burden from your shoulders, from those of your families and communities. It is to accept fully our responsibilities and our failings, as a government and as a country,” Trudeau told hundreds of residential school survivors as the report was released Tuesday.

“Many students who went to residential school never returned. Canadian Heritage - Canada.ca. Funding Apply to one of a myriad of funding programs that support culture, history, heritage, sport and official languages in Canada. 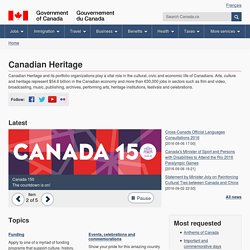 Events, celebrations and commemorations. Canada is a great country. Let's buck the trend this Canada Day. 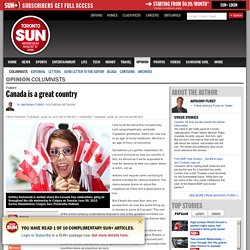 Let's unapologetically celebrate Canadian greatness. I'm no Nationalist...but I'm Damn Proud to be Canadian. Get elephant's newsletter I am not a nationalist. 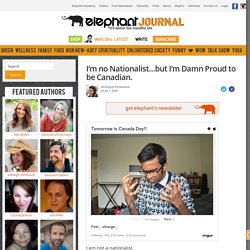 I believe nationalism can be a dangerous thing—often exploited to divide, rather than unite us. I am a citizen of the earth. We are all citizens of the earth. We may live in one specific place but that doesn’t mean that place belongs to us alone, or we to it. Multiculturalism Is A Canadian Success Story  It was May 10, 1534, early in the 16th century, when a little squadron of "first immigrants" set foot on "Canadian" soil in an expedition mission.

The new arrivals consisted of two small vessels, with crews amounting to about one hundred and twenty men, led by the Frenchman Jacques Cartier (or Quartier), a mariner originating from the small French seaport St. Malo, who arrived off Cape Bonavista, Newfoundland. Kanata, or Canada, meaning "village" or "settlement," became the newly discovered land for the Europeans, mainly the French and the English. Why multiculturalism makes me proud to be Canadian. Sure, pugs are adorable, but they also have some unique characteristics. Here are some things to consider before you adopt one. When I first saw Rosie, I knew we were soul mates. She came bounding into the kitchen, tongue lolling and eyes bulging, and gave me a big wet pug kiss on my nose. I was hooked. Fast forward two days and I learned what a lot of new pug owners discover quickly: she never leaves my side. A few months later, I learned the breed has some other unique traits.

Canadian. Why We Are Proud to be Canadian. “I would like to ask you a question,” C almost whispered, pushing her long hair back behind her ear. She sat shyly hunched on the bench, folding her shoulders inward and making her diminutive frame appear even smaller. Her peers, a group of Grade 11 English students gathered with us for an afternoon picnic, were playing a raucous game of volleyball as we sat back and chatted. “Of course!” I responded, “Ask away!” “Are Canadians afraid of the dark?” Why I Love Canada: We Are More Free Than Americans  So many ideas come to mind, but one particular reason that I love Canada is the very philosophy that guides our society: peace, order and good government. Our constitution is wise to mention these principles as foundations of our way of life.

Although the American motto of "life, liberty and the pursuit of happiness" explicitly mentions freedom, it is in fact the Canadian incantation that provides for real liberty. The American version has led to the creation of national myths, largely due to the fact that Americans spilled their own blood fighting for their constitution ages ago. This has led to laws constantly being viewed through the lens of "framers' intent," leading in turn to increased polarization in society. Nimama, are they going to take me away too? My youngest daughter was six years old when she asked me this, clinging to me in desperation, her face distorted and her eyes full of tears. I hadn’t expected such a visceral reaction, and before I could say something intelligent and soothing, I started crying.

I rocked her on my lap say ‘moya ‘moya ‘moya (no no no) over and over again. Just as I had not anticipated her terror, I was taken by surprise by my own. Just thinking about someone taking my child from me is enough to cause my throat to close in fear. Residential School Song (Indian Boarding School Song) Cheryl Bear. Home - Residential School & Historic Trauma Survivor Resources - BearPaw Digital Library at Native Counselling Services of Alberta. Broken Circle:The Dark Legacy Of Indian Residential Schools - Theodore Fontaine. Poems from The Crooked Good - by Louise Bernice Halfe. The End and the Beginning I made a trip across the largest lakeI’ve ever seento where the long noses live.There on the hillBoulders satin a Talking Circle.I walked around and gave tobacco.They squeezed their stone-ground handson my chestas I choked to a decision I had made.My Beloved held me.Though I never spoke of it,somewhere in his secret lair he knew.

Polls showed support for the United States and its foreign policy plummeting among Canadians. U.S. flags were set alight on the street, and the American national anthem was booed at hockey games. NELLY FURTADO LYRICS - Powerless (Say What You Want) The 25 most perfectly Canadian song lyrics ever on CBC Music. Canadian Newcomer Magazine - Culture: Funny About Those Canadians. Of Moose and Men: Analyzing Canadian Humor. Is Canada more than not America? What defines Canadian identity? - Quora. National Narratives in Canadian Literature (Seminar 55+) - Continuing Studies - Simon Fraser University.

What is Canada? Colin Horgan: Without America to despise, what's left for Canadians to rally around? THE GREAT CANADIAN IDENTITY CRISIS. Anti americanism and canadian identity. Culture of Canada - history, people, traditions, women, beliefs, food, customs, family, social. Liberal Americans: Come to Canada! I Am Canadian, and so are they: Molson’s new nationalist pitch. 6 4 1h. What are some cultural differences between Canadians and Americans? - Quora. Canadian Culture in a Global World. TV, Values, and Culture in U.S.-Canadian Borderland Cities: A Shared Perspective.