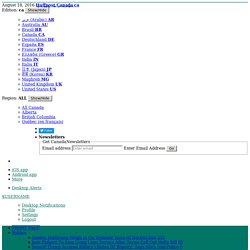 De Grasse, from Markham, Ont., finished neck-and-neck with reigning champion Usain Bolt of Jamaica. The Canadian finished in 19.80 seconds, besting his own record of 19.88 seconds set at the 2015 Pan American Games in Toronto. Bolt finished slightly ahead of De Grasse in 19.78 on Wednesday night. Usain Bolt laughs with Andre De Grasse after they compete in the men's 200m semi-final, Aug. 17, 2016.

Alberta Fire: Mandatory Evacuation Order Issued For Municipal District Of Greenview. FOX CREEK, Alta. — An out-of-control wildfire is forcing people from their homes in a rural and farm region northwest of Edmonton. 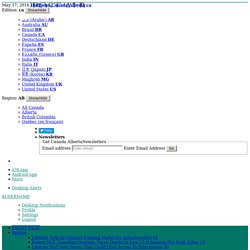 The Municipal District of Greenview has ordered the mandatory evacuation of people who live south of the hamlet of Little Smoky. "It is rural agriculture areas,'' Diane Carter, a spokeswoman for the municipal district, said Monday. "The town of Fox Creek is not impacted. The hamlet of Little Smoky is also not impacted yet, but if necessary we will put them on a one-hour evacuation notice.'' The fire was burning away from communities, about 270 kilometres northwest of Edmonton. There were no reports of homes being destroyed. Number of evacuees unclear Carter said it was not immediately clear how many people have left their homes. She said some farmers in the region are concerned about leaving their livestock. "Sometime there is hesitation to evacuate if their animals may be affected,'' she said. Evacuees were being urged to register in Valleyview. Fort McMurray's 'Apocalyptic' Wildfire By The Numbers.

Fort McMurray's 'Apocalyptic' Wildfire By The Numbers. Winter in Quebec, Canada - Â©Gilles ChÃªnevert. Twitter. Twitter. Facebook. Craig Harnum - God Bless Fort Mac this picture is worth a... Facebook. Facebook. Twitter. Twitter. Twitter. The image is amazing, but watch the video from ISS. Calgary to the Rockies, today. Twitter. Twitter. Iceberg taken yesterday at #sunrise at Cape Bonavista By: Vanessa Cantwell Thanks @NLtweets. Multiple exposures shot in Banff, #Canada. iPhone images of Toronto and London reflected in puddles. A photographer has come up with an innovative way of showcasing Toronto's most famous landmarks - by captured their mirror image in a puddle. 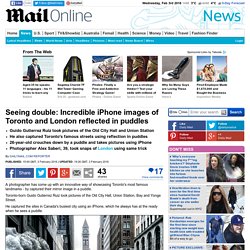 Toronto-born Guido Gutierrez Ruiz took pictures of the Old City Hall, Union Station, Bay and Yonge Street. He captured the sites in Canada's busiest city using an iPhone, which he always has at the ready when he sees a puddle. Guido Gutierrez Ruiz has used puddles to take mirror images of famous Toronto landmarks - here is the Old City Hall This picture shows Toronto's Union Station and part of the CN tower visible in the grey sky Mr Ruiz crouches down as low as possible to the ground to take his shots - pictured here is Bay Street The 26-year-old said: 'I started taking photographs with my phone around three years ago as a hobby. 'I was waiting to cross over the road and looked down to see the blue sky reflected in a puddle. 'I instantly imagined what the street ahead of me would look like, uncovering its hidden parallel world. 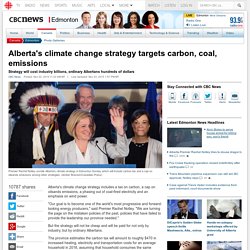 "Our goal is to become one of the world's most progressive and forward-looking energy producers," said Premier Rachel Notley. "We are turning the page on the mistaken policies of the past, policies that have failed to provide the leadership our province needed. " But the strategy will not be cheap and will be paid for not only by industry, but by ordinary Albertans. The province estimates the carbon tax will amount to roughly $470 in increased heating, electricity and transportation costs for an average household in 2018, assuming that household consumes the same amount of fossil fuels as it did in 2015. There will be, however, consumer rebates to offset some of those increases. The province sees the emissions cap as motivation for the oilsands sector to innovate and become more globally competitive.

This Is The Coolest Darn Thing About Our Canadian Currency. Pictures of the day: 3 January 2016. #Quebec city. Photography by ©Alastair Lee. 32 Incredible Real Headlines That Could Only Happen In Canada. Mount Assiniboine, British Columbia - Photo by Callum Snape. #Quebec old city #Canada. Bob from Calgary’s post about life in ‘one of the freest countries’ is New York Times’ most popular comment. The most popular comment ever made on the New York Times website was penned by a Calgary man. 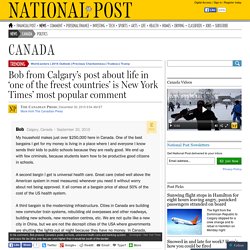 Bob from Calgary, as he is identified on the site, received some 7,040 recommendations for his comment on a 2010 column about wealth and privilege written by Paul Krugman. The newspaper, which fields some 9,000 comments each day, says Bob’s is the top post “of all time.” The runner-up, posted on a story about the mass shooting in Charleston, S.C., drew roughly 5,489 recommendations. One of the best bargains I get for my money is living in a place where I and everyone I know sends their kids to public schools because they are really good In his comment, Bob praises Canada’s public schools, universal health care and banking system and says his tax bill is only two per cent higher than it would be south of the border. He also says he doesn’t feel Canadians are in any way less free than their American counterparts. Bob from Calgary’s post about life in ‘one of the freest countries’ is New York Times’ most popular comment. 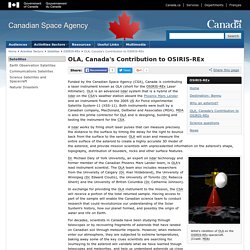 OLA is an advanced lidar system that is a hybrid of the lidar on the CSA's weather station aboard the Phoenix Mars Lander and an instrument flown on the 2005 US Air Force eXperimental Satellite System-11 (XSS-11). Both instruments were built by a Canadian company, MacDonald, Dettwiler and Associates (MDA). MDA is also the prime contractor for OLA and is designing, building and testing the instrument for the CSA. Photography by ©Thomas Ormston. Photography by ©Jonathan Basiago. Bottled air from Canada is the newest luxury item in smog-infested China >> Athabasca Falls, Alberta, Canada. Jmeson75 snapped the #northernlights from the #bisoncam. Forecast is good for more tonight!