The Fight to Unmuzzle Canada's Scientists. As a scientist employed by the Canadian government, every question Janet receives from a journalist or member of the public must be screened by a media officer. 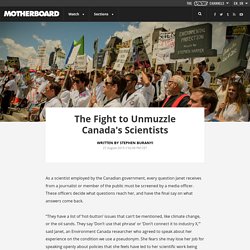 These officers decide what questions reach her, and have the final say on what answers come back. “They have a list of ‘hot-button’ issues that can’t be mentioned, like climate change, or the oil sands. Scientists push for ‘scientific integrity’ at bargaining table. Canada’s federal scientists are going to the bargaining table this week with an unprecedented package of contract changes to promote “scientific integrity” in government, including the right of scientists to speak freely and forbidding political interference in their work. 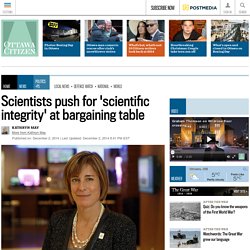 The Professional Institute of the Public Service of Canada, which represents more than 15,000 scientists, researchers and engineers, is tabling a negotiating position for managing science in the “public interest” with a list of demands for Treasury Board negotiators that dramatically push the boundaries of traditional collective bargaining in the public service. The 7,000 members of PIPSC’s large applied science and patent examination group are the first at the table with Treasury Board this week, followed by 2,300 members of the research group next week.

The two groups have previously traded electronic demands, but this is the first face-to-face negotiating round. Science Uncensored - Canada. Evidence 4 Democracy (E4Dca) sur Twitter. @DeathOfEvidence sur Twitter. Environment Canada 'muzzles' scientists' dealings with media. Environment Canada has "muzzled" its scientists, ordering them to refer all media queries to the federal government, where communications officers will help them respond with "approved lines. 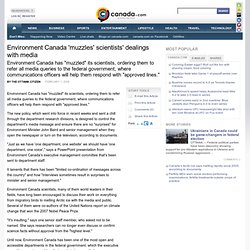 " The new policy, which went into force in recent weeks and sent a chill through the department research divisions, is designed to control the department's media message and ensure there are no "surprises" for Environment Minister John Baird and senior management when they open the newspaper or turn on the television, according to documents. "Just as we have 'one department, one website' we should have 'one department, one voice'," says a PowerPoint presentation from Environment Canada's executive management committee that's been sent to department staff.

It laments that there has been "limited co-ordination of messages across the country" and how "interviews sometimes result in surprises to minister and senior management. " Musings of A Canadian government scientist from behind the muzzle. NYT: Silencing Scientists. RMR: A Message From Canada's Scientists. Youtube: Death of Evidence. Canada's PM Stephen Harper faces revolt by scientists. Canada's prime minister, Stephen Harper, faces a widening revolt by the country's leading scientists against sweeping cuts to government research labs and broadly pro-industry policies. 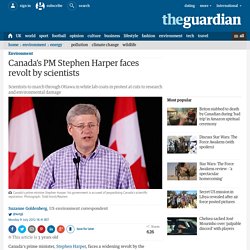 The scientists plan to march through Ottawa in white lab coats on Tuesday in the second big protest in a month against the Harper government's science and environmental agenda. An Open Letter on Science to Canadian Prime Minister Stephen Harper - Union of Concerned Scientists. Science Cuts: Ottawa Views Pure Science As 'Cash Cow,' Critics Say. The email landed without warning in Brad Anholt’s inbox last April. 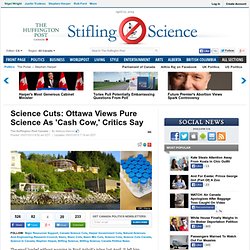 It left him speechless. “I couldn’t even talk about it. Not for hours,” said Anholt, one of Canada’s leading experts in marine biology and the director of the world-renowned Bamfield Marine Sciences Centre, a not-for-profit teaching and research facility on the west coast of Vancouver Island. With a staff of 30, Bamfield is used by visiting researchers to study fish, marine animals and ecosystems. The centre also runs education programs for students at all levels.

Silence of the Labs

Canadian government accused of destroying environmental archives. This anonymous photograph, which circulated in the Canadian media, was said to show books discarded by a Fisheries and Oceans Canada library in Mont-Joli, Quebec. 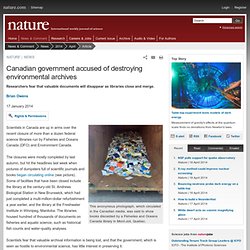 Scientists in Canada are up in arms over the recent closure of more than a dozen federal science libraries run by Fisheries and Oceans Canada (DFO) and Environment Canada. The closures were mostly completed by last autumn, but hit the headlines last week when pictures of dumpsters full of scientific journals and books began circulating online (see picture). Some of facilities that have been closed include the library at the century-old St. Andrews Biological Station in New Brunswick, which had just completed a multi-million-dollar refurbishment a year earlier, and the library at the Freshwater Institute in Winnipeg, Manitoba. 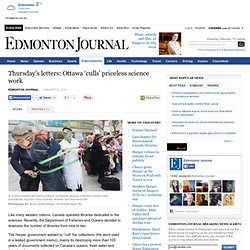 Photograph by: Bruno Schlumberger , Postmedia News, file Like many western nations, Canada operates libraries dedicated to the sciences. Recently, the Department of Fisheries and Oceans decided to downsize the number of libraries from nine to two. The Harper government wanted to “cull” the collections (the word used in a leaked government memo), mainly by destroying more than 100 years of documents collected on Canada’s oceans, fresh water and fisheries. Several hundred thousand documents, paid for by taxpayers, were buried or burned, or given away to staff, consultants or others. Federal librarians say they cannot remember a government destroying public documents. Scientist Silencing Continues For Federally-Funded Research. At an annual conference in Truro, N.S., that brings fishermen and scientists together to promote ocean research, some researchers declined to discuss their work with media because they did not have approval to do so. 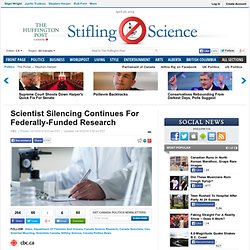 Scientists across the country have been expressing growing alarm over federal programs monitoring areas that range from climate change and ocean habitats to public health, worried Canadians are being deprived of crucial scientific information. On Friday, the 21st annual meeting of the Fishermen and Scientists Research Society gathered in Nova Scotia’s “Hub City” to discuss the latest fisheries and oceans research. Stifling Science: Pictures, Videos, Breaking News. Doctorow: Canadian govt demands fill in a 10-page questionnaire & CV in order to seek permission to comment on oil pipeline. The Canadian Government Doesn't Let Its Meteorologists Talk About Climate Change. By Emily Atkin "The Canadian Government Doesn’t Let Its Meteorologists Talk About Climate Change" A Canadian scientist protests deep cuts and restrictions to their industry by the Stephen Harper administration on July 10, 2012 in Ottawa, Canada. 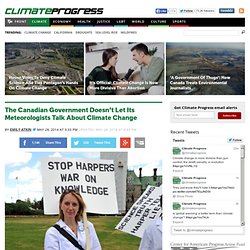 CREDIT: Shutterstock A spokesperson for Canada’s federal government has confirmed that meteorologists employed by the Stephen Harper administration are not allowed to speak publicly about climate change, saying the scientists are not qualified to weigh in on the issue. The government’s communication policy does allow meteorologists to talk about extreme weather, but they are prohibited from talking about climate patterns that could have affected that weather, Environment Canada spokesperson Mark Johnson told investigative journalist Mike De Souza.

Canada's New Government May Be a New Beginning for Science. When Simon Donner, a climate scientist at the University of British Columbia, visited a sprawling Canadian government research center last spring, it wasn’t the empty hallways and sparsely occupied laboratories that stuck with him. 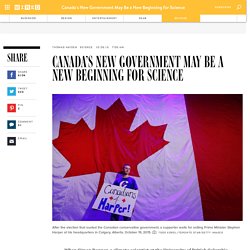 You’d expect those ghost town conditions after years of cutbacks and attrition. What really got him was the cafeteria. Donner’s hosts suggested coffee; he figured he’d be able to get a bite to eat as well. “Instead, it was a huge indoor lunch room,” he says.