The Asia Factor. Engaging ASEAN: What Next for Canada? Introduction On 14 October 2013, Foreign Minister John Baird landed in Vientiane, Laos and made diplomatic and personal history. 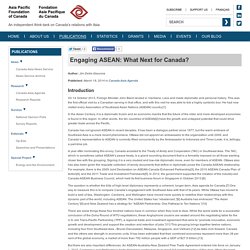 This was the first official visit by a Canadian serving in that office, and with this visit he was able to tick a highly symbolic box: He had now visited every Association of Southeast Asian Nations (ASEAN) country.[1] In the Asian Century, it is a diplomatic truism and an economic mantra that the future of the older and more developed economies is found in this region. In other words, the ten countries of ASEAN[2] have the growth and untapped potential that could drive greater trade across the Pacific. Canada has not ignored ASEAN in recent decades. Canadian exporters facing challenge of rising geopolitical risks, EDC says. OTTAWA — Ever since the recession, Canadian companies have been pushed to open their wallets in order to open new export channels. 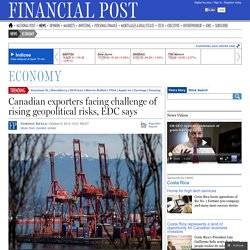 But the risks that come with tapping into some of those markets can present other challenges — and dangers, such as geopolitical instability. “What seems to be clear is that we’ve moved from a period of economic turbulence to an era increasingly imperiled by so-called political risks,” says Stuart Bergman, assistant chief economist at Export Development Canada, which Thursday launched its Country Risk Quarterly looking at global trade and investment prospects and their downsides. Does Ottawa have staying power in Southeast Asia? Wednesday marks the 45th anniversary of the founding of the Association of Southeast Asian Nations. 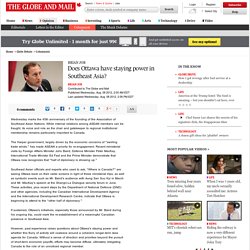 While internal relations among ASEAN members can be fraught, its voice and role as the chair and gatekeeper to regional institutional membership remains particularly important to Canada. The Harper government, largely driven by the economic concerns of “swirling trade winds,” has made ASEAN a priority for re-engagement. Recent ministerial visits by Foreign Affairs Minister John Baird, Defence Minister Peter MacKay, International Trade Minister Ed Fast and the Prime Minister demonstrate that Ottawa now recognizes that “half of diplomacy is showing up.” Subjects » Southeast Asia: Power Shifts & Vibrant Economies. Third only to Saudi Arabia and Venezuela in the size of its proven oil reserves, Canada has the potential to become a global energy superpower in the 21st century. 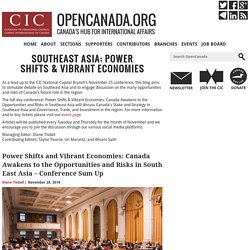 However, given that 99% of its oil exports currently head south to the United States, Canada’s energy success will be closely tied to its ability to expand to overseas markets. In looking to diversify to energy-hungry markets abroad, Canada’s current limitation is infrastructure to transport its oil to coastal ports. Without pipelines providing high-volume access to markets outside of North America, Canadian oil trades at a steep discount compared to global prices.

More … The Provinces Reach Out To Asia. New Shores (Reuters) Close to 12 percent of Canada’s exports have been shipped across the Pacific to various Asian markets in 2013, up from 6.6 percent in 2006. 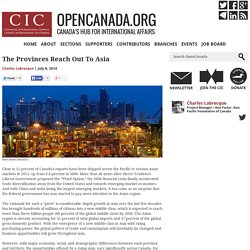 More than 40 years after Pierre Trudeau’s Liberal Government proposed the “Third Option,” the 2008 financial crisis finally accelerated trade diversification away from the United States and towards emerging market economies. And with China and India being the largest emerging markets, it has come as no surprise that the federal government has now started to pay more attention to the Asian region. Canada’s next energy target: Asia.

"If you go to the OECD(Organisation for Economic Cooperation and Development)," he told the room, "they will tell you that the best functioning carbon tax in the world is in British Columbia, which has reduced gasoline consumption by 18 per cent per capita over four years. 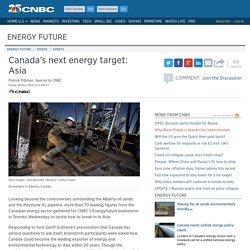 It's politically acceptable, it's been through two elections, it's now a non-partisan issue. We know how to do this in Canada. It didn't kill jobs, it didn't produce declining rates of growth. We actually do know how to do a world-class carbon tax here. " Www.ceocouncil.ca/wp-content/uploads/2011/10/Strategic-proposal-ENGLISH-25-oct-low-resolution.pdf. Www.asiapacific.ca/sites/default/files/filefield/korea-canada_middle_power_strategies_-_lee_paper_0.pdf. Canada risks being left behind as green energy takes off. The shift to clean energy is producing huge economic gains, but Canada risks being left behind if the federal government doesn’t get on board, a new report warns. 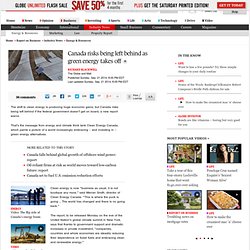 That’s the message from energy and climate think tank Clean Energy Canada, which paints a picture of a world increasingly embracing – and investing in – green energy alternatives. Clean energy is now “business as usual, it is not boutique any more,” said Merran Smith, director of Clean Energy Canada. “This is where the puck is going … The world has changed and there is no going back.” The report, to be released Monday on the eve of the United Nation’s global climate summit in New York, says that thanks to government support and dramatic increases in private investment, “companies, countries and whole economies are steadily reducing their dependence on fossil fuels and embracing clean and renewable energy.”

It cites China, for example, where new renewable energy plant construction has now surpassed investments in coal generation. Southeast Asian mission 'next logical step’ in regional courtship. Canada’s decision to establish a dedicated diplomatic mission to the Association of Southeast Asian Nations could go a long way in strengthening trade and security ties with the region, and free up Canadian embassy resources in Indonesia, say Asia-Pacific analysts. 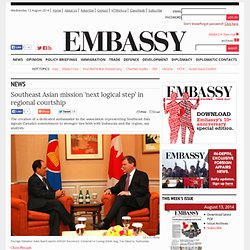 Foreign Minister John Baird announced the federal government’s plans to establish a Canadian ambassador to ASEAN on August 5 in the midst of a two-week tour of the region. The announcement followed meetings with officials from ASEAN member states Singapore and Indonesia. News - Canada's defence diplomacy hurt by tight budget, report says.

Overstretched staff and drastic cuts to travel and hospitality are compromising Canada’s defence diplomacy program, considered a crucial tool for advancing military and trade interests at a time of complex global insecurity, according to a new internal evaluation. 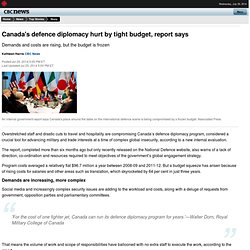 The report, completed more than six months ago but only recently released on the National Defence website, also warns of a lack of direction, co-ordination and resources required to meet objectives of the government’s global engagement strategy. Program costs averaged a relatively flat $96.7 million a year between 2008-09 and 2011-12. Yuen Pau Woo: The future of China and the West. To mark 10 years of Embassy News, this newspaper asked foreign policy thinkers to paint a picture of where Canada should go in the next decade. 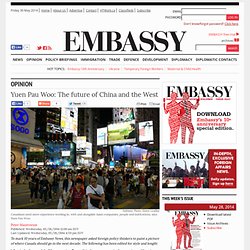 The following has been edited for style and length: What is the future of the West-courting-East political movement we’ve been seeing and hearing about lately? Will the West and China move closer, or will they be adversaries, for example, the way the West is with Russia right now? “The West and the East are diffuse, and cannot be categorized as two monolithic entities engaging each other. United States policy towards Asia is not the same as EU policy towards Asia. The Asia Factor. ‘We welcome Chinese investment, including from SOEs’ (Page 2 of 3) This is very important, as recent analysis of Chinese overseas mining investment by the National Development and Reform Commission has found that 80 per cent of such ventures fail.

So, what we are doing as a result, when we are talking to Chinese investors, we tell them that they should exercise due diligence when considering foreign investment and seek the services of good Canadian lawyers and financial institutions so as to better prepare themselves. I can confirm also that significant investments to acquire Canadian businesses continue to be approved under the Investment Canada Act.

Canadian Outlook Long-Term Economic Forecast: 2013. Inside the Issues 4.25. The Big Break: The Conservative Transformation of Canada's Foreign Policy. CIGI Papers No. 29 Download PDf In the years since the January 2006 election, Prime Minister Stephen Harper’s three Conservative governments have pursued a foreign policy so unlike what came before that it could be called the big break.