British Columbia general election, 2013. The Liberal Party won its fourth straight majority; Clark was defeated in her riding, but she was re-elected to the legislature in a subsequent by-election in Westside-Kelowna on July 10, 2013,[1] after Liberal MLA Ben Stewart stepped down on her behalf.[2] The NDP remained the official opposition, losing two seats, and the Green Party won its first seat. 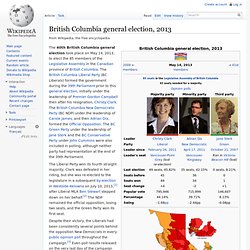 Timing[edit] The writs were dropped April 16, 2013,[6] and the general election was held on May 14, 2013, with advanced voting made available on May 8 through 11.[7] Background[edit] After leading the BC Liberals for 17 years, Gordon Campbell announced he would resign as Premier and party leader in November 2010. Privatization Limits Access to Public Information. Companies looking to take control of public services are winning government contracts for a wide array of services ranging from state prisons to local water systems to public schools, and often without much public oversight. 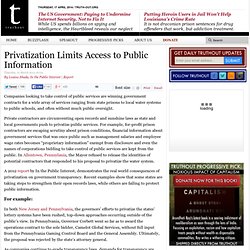 Private contractors are circumventing open records and sunshine laws as state and local governments push to privatize public services. For example, for-profit prison contractors are escaping scrutiny about prison conditions, financial information about government services that was once public such as management salaries and employee wage rates becomes “proprietary information” exempt from disclosure and even the names of corporations bidding to take control of public services are kept from the public. In Allentown, Pennsylania, the Mayor refused to release the identities of potential contractors that responded to his proposal to privatize the water system. For example: As companies continue to evade transparency laws, demands for transparency are increasing. Ten things Stephen Harper hopes you forget by 2015. Michael Harris is a writer, journalist, and documentary filmmaker. 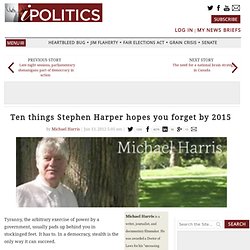 He was awarded a Doctor of Laws for his “unceasing pursuit of justice for the less fortunate among us.” His eight books include Justice Denied, Unholy Orders, Rare ambition, Lament for an Ocean, and Con Game. His work has sparked four commissions of inquiry, and three of his books have been made into movies. He is currently working on a book about the Harper majority government to be published in the autumn of 2014 by Penguin Canada.

Canada's Radical Prime Minister Harper: Interview with Allan Gregg. Requiem for a preamble: A lament for a socialist ideal. The New Democratic Party believes that the social, economic and political progress of Canada can be assured only by the application of democratic socialist principles to government and the administration of public affairs.The principles of democratic socialism can be defined briefly as:That the production and distribution of goods and services shall be directed to meeting the social and individual needs of people within a sustainable environment and economy and not to the making of profit;To modify and control the operations of the monopolistic productive and distributive organizations through economic and social planning. 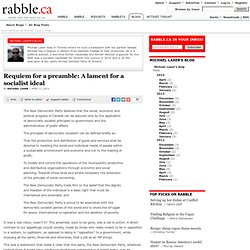 It was a real vision, wasn't it? This preamble, soon to be gone, was a call to action.

Redesigning Parliament - Samara. Democracy Canadian-style Part II: At home. Do free and competitive elections make a democracy? Maybe not. By Lauren Bishop Tanzania looks an awful lot like a democracy. 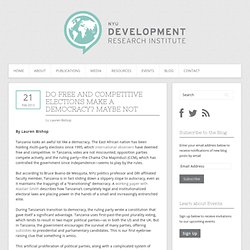 The East African nation has been holding multi-party elections since 1995, which international observers have deemed free and competitive. In Tanzania, votes are not miscounted, opposition parties compete actively, and the ruling party—the Chama Cha Mapinduzi (CCM), which has controlled the government since independence—seems to play by the rules. But according to Bruce Bueno de Mesquita, NYU politics professor and DRI affiliated faculty member, Tanzania is in fact sliding down a slippery slope to autocracy, even as it maintains the trappings of a “transitioning” democracy. A working paper with Alastair Smith describes how Tanzania’s completely legal and institutionalized electoral laws are placing power in the hands of a small and increasingly entrenched elite. During Tanzania’s transition to democracy, the ruling party wrote a constitution that gave itself a significant advantage.

Imposing Austerity on the World’s Most Resource-rich Country. Ellen Brown April 1, 2012www.webofdebt.com/articles/canada.php Even the world’s most resource-rich country has now been caught in the debt trap. 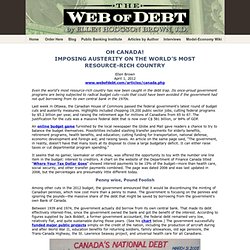 Its once-proud government programs are being subjected to radical budget cuts—cuts that could have been avoided if the government had not quit borrowing from its own central bank in the 1970s. Last week in Ottawa, the Canadian House of Commons passed the federal government’s latest round of budget cuts and austerity measures. Highlights included chopping 19,200 public sector jobs, cutting federal programs by $5.2 billion per year, and raising the retirement age for millions of Canadians from 65 to 67. The justification for the cuts was a massive federal debt that is now over C$ 581 billion, or 84% of GDP.

An online budget game furnished by the local newspaper the Globe and Mail gave readers a chance to try to balance the budget themselves. Penny wise, Pound Foolish The debt shot up only after 1974. The Bankers’ Silent Coup Game over: we win. Without electoral reform no opposition party is going to win. Let us just take stock of where we are. 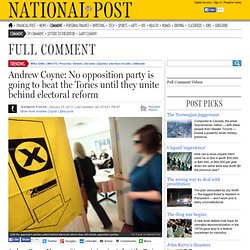