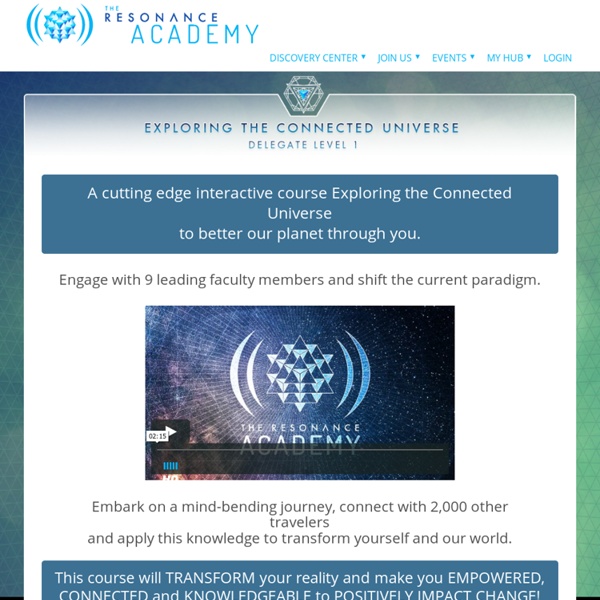 A cutting edge interactive course Exploring the Connected Universe to better our planet through you. Engage with 9 leading faculty members and shift the current paradigm. Embark on a mind-bending journey, connect with 2,000 other travelers and apply this knowledge to transform yourself and our world. This course will TRANSFORM your reality and make you EMPOWERED, CONNECTED and KNOWLEDGEABLE to POSITIVELY IMPACT CHANGE! I have done thirty years of research and – together with a team of brilliant scientists – developed a unified field theory. My mission and the mission of the Resonance Academy is to get this information out to everyone, regardless of their educational background. The Delegate level 1 course Exploring the Connected Universe is a comprehensive, self-paced online multimedia course packed with 30 years of research and the latest information on this topic. We have scientifically proven that we are all connected at the most fundamental level of space time. Pay $384 in full today

Conscious Evolution: Leaping Into Possibility It is 40 years since the Futurist magazine published Prof. Clare W. Graves’ article titled “Human Nature Prepares for a Momentous Leap,” which contained predictions for our future that have proved remarkably prescient. The conditions that Graves anticipated are those we now experience. The School of Life - Developing Emotional Intelligence Know Yourself Prompt Cards These cards are designed to assist us in a journey of self-knowledge; they present us with a range of ideas and questions that can help us to understand ourselves better. £10 Gift E-Voucher An original gift, delivered instantly by email. This electronic voucher can be used across any of our London events or spent in The School of Life online or London shops. £25, £50 or £100. Writing as Therapy Journals

The End of Capitalism Has Begun Paul Mason, GuardianWaking Times Without us noticing, we are entering the postcapitalist era. At the heart of further change to come is information technology, new ways of working and the sharing economy. The old ways will take a long while to disappear, but it’s time to be utopian… The red flags and marching songs of Syriza during the Greek crisis, plus the expectation that the banks would be nationalised, revived briefly a 20th-century dream: the forced destruction of the market from above. Johann Heinrich Pestalozzi Johann Heinrich Pestalozzi (pronounced [pestaˈlɔttsi]; January 12, 1746 – February 17, 1827) was a Swiss pedagogue and educational reformer who exemplified Romanticism in his approach. He founded several educational institutions both in German- and French-speaking regions of Switzerland and wrote many works explaining his revolutionary modern principles of education. His motto was "Learning by head, hand and heart". Thanks to Pestalozzi, illiteracy in 18th-century Switzerland was overcome almost completely by 1830.

Think Global, Act Local; Preparing for and Building the New Era for Humanity It’s mind-blowing the moment we live in. Not only are all the world’s indigenous and modern cultures connecting into a global society for the first time in our known history, but we’re doing it in a reality that is so mysterious that our minds are intertwined at the fundamental level. As duality would have it though; there is madness to this magic. There’s escalating conflict all across the planet. The global economy is deflating from a decades-old debt bubble. Ignorance, apathy, ill-health and suffering are commonplace.

Become a Startup Founder (Complete Course) The Founder Institute presents "Become a Startup Founder" - the first online program designed to teach you everything you need to know to launch your startup. Become a Startup Founder is a comprehensive step-by-step program to help Founders launch a meaningful and enduring technology company at their own pace. The curriculum and the assignments are based on the intensive four-month Founder Institute program, an entrepreneur training and startup launch program that has helped launch hundreds of successful companies across the globe, like Udemy. Mapping the Emerging Post-Capitalist Paradigm and Its Main Thinkers By Commons Transition / commonstransition.org “We do not live in an era of change, but in a change of eras” is the way Jan Rotmans from the University Rotterdam describes the structural changes impacting our societies. This is also the phrase Michel Bauwens chose to open his latest book yet to be published in English which title is likely to be close to “Towards a post-capitalist society with the Peer-to-Peer”. For thinkers like Jan Rotmans and Michel Bauwens this change of eras is akin to the Industrial Revolution in the second half of the 19th century, and characterized by transitions in various fields.

Startup & Go - First Steps to Building a Technology Company About the Course: The Founder Institute is giving you "Startup and Go" – a crash course on the initial steps to creating a meaningful and enduring technology company. "Startup and Go" is a collection of talks from the very beginning of the Founder Institute’s startup accelerator program - which, in just 4.5 years, has launched over 1000 technology companies across 55 cities and 6 continents. Taught by some of the program’s highest-rated Mentors, this course helps you create a strong foundation for a technology startup – from a properly vetted and researched idea, to a strong initial team.