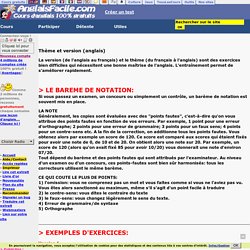 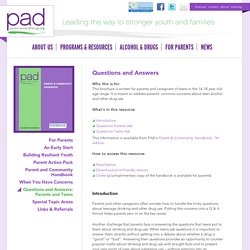 It is meant to address parents’ common concerns about teen alcohol and other drug use. What’s in this resource: This information is available from PAD’s Parent & Community Handbook, 7th edition. 14-year-old driver charged in crash that killed girl, 12, in Caledon, Ont. - Toronto. A 14-year-old driver has been charged in the death of the 12-year-old girl he was carrying as a passenger in Caledon, Ont., after a crash early Tuesday morning. 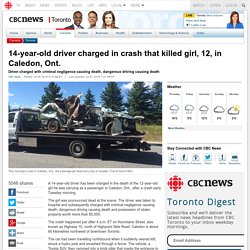 The girl was pronounced dead at the scene. The driver was taken to hospital and subsequently charged with criminal negligence causing death, dangerous driving causing death and possession of stolen property worth more than $5,000. The crash happened just after 4 a.m. ET on Hurontario Street, also known as Highway 10, north of Highpoint Side Road. Caledon is about 60 kilometres northwest of downtown Toronto.

Teenage drink driver Joseph Salah-Eldin killed friend in Norfolk crash as he played with his stereo. Joseph Salah-Eldin, 19, lost control of car as he fixed the sound systemVehicle then careered off the road and overturned in a field Crash killed David Powell, 20, instantly and injured two other passengersSalah-Eldin was almost twice the drink-drive limit at time of crashHas been jailed for three years four months and banned from driving By Daily Mail Reporter Published: 09:36 GMT, 23 April 2013 | Updated: 08:11 GMT, 24 April 2013 A teenager has been jailed for just three years after killing his friend in a horrific crash after crashing into a field where he rolled his car after driving at speeds of up to 101mph. 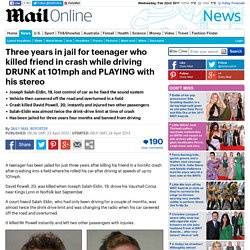 This Teen Glanced At Her Phone For Just A Second And Her Life Changed Forever. This Haunting Story of a Teen Fighting for His Life After a Car Crash Will Make You Wish He Never Wrote That Last Text. A 16-year-old is fighting for his life after sustaining serious injuries in a car accident that one witness says may have been caused by texting. 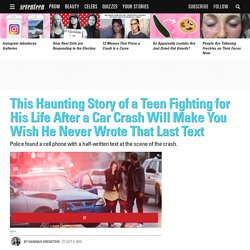 James Boatright from Des Moines, Iowa, was found unconscious on Monday in a blue Chevy Cavalier that had been T-boned by a pick-up truck. According to police reports, James pulled right into oncoming traffic, likely because he was texting and driving. Advertisement - Continue Reading Below Sergeant Dan Charleston of the Polk County Sheriff's Office was off-duty when he pulled up to the scene. "I got out and could see that he was trapped in there on the drivers side of the vehicle and there was a lot of smoke inside which is consistent with the airbag deployment," he told WHO TV.

What you feel when you're drunk ? Teens Behind The Wheel. Young Drivers: The High Risk Years. Religulous Full Movies. The Big Religion Chart. This "Big Religion Chart" is our attempt to summarize the major religions and belief systems of the world - Buddhism, Christianity, Hinduism, Islam, Judaism, and dozens more - into a quick-reference comparison chart. Oversimplication is unavoidable in charts like these, and it is not intended to be a substitute for advanced religious study and exploration, but simply a fast overview.

Multiple Intelligences Inventory. MI quiz. How Smart Are You For Your Age? + FACE REVEAL. Grammar Games Modal Auxiliary Verbs Game - Can, Must, Would Interactive Game. Modal verbs - can, could, might, must, should game. How to Write a Thesis Statement Worksheet Activity. English Vocabulary Exercises - Transitions - Exercise 2. English Vocabulary Exercises - Transitions - Exercise 1. SYRIA- oral questions. What is the best documentary about the ongoing conflict in Syria? - Quora. 11 Documentaries You Can Watch Right Now To Understand How ISIS Rose To Power. Last month, the Islamic State jihadist group, formerly known as ISIS or ISIL, declared its sovereignty and promoted one of its leaders, Abu Bakr al-Baghdadi, to the helm.

The Islamic State has been calling their newfound Syrian-Iraqi realm a caliphate, or a singular Muslim nation, with al-Baghdadi serving as caliph. This particular type of religiously guided state hasn’t been seen in centuries, and they’re not inherently bad. What is inherently bad, however, is the Islamic State and the gruesome and inhumane methods it employs to seize control of Iraq. For the past several weeks, the group has been terrorizing Iraqis, particularly an ethnic minority known as the Yazidis, prompting U.S. airstrikes to halt their progression. Air raids are even now being considered in neighboring Syria, where much of the group resides. It’s a complex issue, and much of the current state of affairs is best explained by analyzing the events of the past decade. Explore HuffPost Media Politics Black Voices. Ground Zero: Syria. Ground Zero: Syria is a compiled photojournalist and videographer Robert King's footage into a series of raw, largely unedited vignettes that present a snapshot of the ancient city as it crumbles and burns while its citizens are killed indiscriminately. 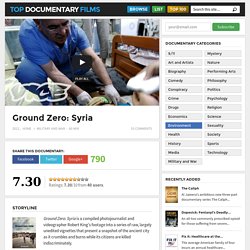 Amid a fierce battle between Assad's security forces and Free Syrian Army insurgents, fire swept through the old Souk of Aleppo, a historic covered market and World Heritage site. Rebel fighters and activists have reported that the blaze was sparked by the use of incendiary mortar rounds by Assad's forces. The atrocities and war crimes currently ripping Syria apart are evident inside a field hospital in Aleppo, the country's largest city.