What We Will Remember from Obama's 2009 Inaugural Address. President Barack Obama’s inaugural address was good, but not truly canonical. 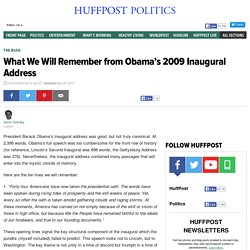 At 2,396 words, Obama’s full speech was too cumbersome for the front row of history (for reference, Lincoln’s Second Inaugural was 698 words; the Gettysburg Address was 278). Nevertheless, the inaugural address contained many passages that will enter into the mystic chords of memory. Here are the ten lines we will remember: 1. “Forty-four Americans have now taken the presidential oath. These opening lines signal the key structural component of the inaugural which the pundits (myself included) failed to predict: This speech looks not to Lincoln, but to Washington. 2. Obama quotes 1 Corinthians 13:11, “When I was a child, I spake as a child, I understood as a child, I thought as a child: but when I became a man, I put away childish things.” 3. 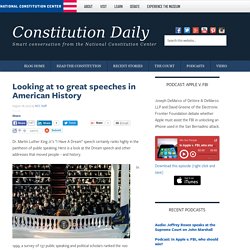 Martin Luther King Jr.’s “I Have A Dream” speech certainly ranks highly in the pantheon of public speaking. Here is a look at the Dream speech and other addresses that moved people – and history. In 1999, a survey of 137 public speaking and political scholars ranked the 100 most-important political speeches of the 21st Century. The academics evaluated speeches on the basis of their social and political impact, and rhetorical artistry. King’s “Dream” speech from August 28, 1963 topped the list, followed by John F. The eclectic list included public speeches from Barbara Jordan, Richard Nixon, Malcom X and Ronald Reagan in the top 10 of the rankings. Link: Read The List Public speaking has played an important role in our country’s story. 1. 2. 3. Give me Liberty. On March, 23 1775 Patrick Henry delivered his famous speech which ended with the immortal words: "Give me liberty or give me death! 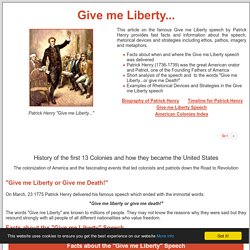 " The words "Give me Liberty" are known to millions of people. They may not know the reasons why they were said but they resound strongly with all people of all different nationalities who value freedom. Facts about the "Give me Liberty" SpeechFacts about the Give me Liberty speech are as follows: The Meaning behind the words of Give me Liberty...The speech of Patrick Henry was delivered to the convention who were divided two opposing points of view. Short Analysis of Give me Liberty...In his speech he emphasizes his view that there is a need to fight for truth and God's purpose. Give me Liberty - There can be no compromisePatrick Henry ends his speech with the immortal words: He is equating death with slavery under British rule. City upon a Hill. Phrase derived from the parable of Salt and Light "A City upon a Hill" is a phrase derived from the parable of Salt and Light in Jesus's Sermon on the Mount. 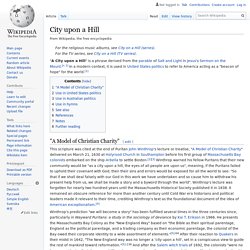 [n 1] In a modern context, it is used in United States politics to refer to America acting as a "beacon of hope" for the world.[1] "A Model of Christian Charity"[edit] Winthrop’s prediction "we will become a story" has been fulfilled several times in the three centuries since, particularly in Wayward Puritans: a study in the sociology of deviance by Kai T. Erikson in 1966. Use in United States politics[edit] On 9 January 1961, President-elect John F. ... On November 3, 1980, Ronald Reagan referred to the same event and image in his Election Eve Address "A Vision for America". I have quoted John Winthrop's words more than once on the campaign trail this year—for I believe that Americans in 1980 are every bit as committed to that vision of a shining "city on a hill," as were those long ago settlers ...

U.S. ... Use in hymns[edit] In 180 Seconds You Will Be Voting For Bernie Sanders. Top 10 Reasons Why Bernie Sanders May Actually Become President. How do they work? US Election 2016 explained. For starters, there are numerous candidates on the Republican and Democrat sides who are competing for votes in what are known as the primary elections. 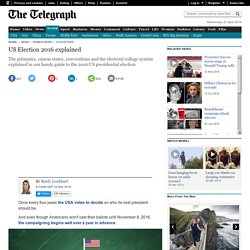 There are plenty of Republican candidates running in the primaries, while Hillary Clinton dominates the Democrats These candidates include the likes of Republicans Donald Trump, Ted Cruz and Marco Rubio. The Democrats include Hillary Clinton and Bernie Sanders. This group of presidential hopefuls spend the first half of the election race battling it out in the debates, which take place across the country as they attempt to win popularity on key voter issues. Then candidates compete to win nomination votes in the primaries. It's not until the middle of 2016 that a single presidential candidate will emerge on the Republican and Democrat sides. In order to understand the US presidential election process, we've created this useful animated guide which explains all the key aspects of the electoral system.