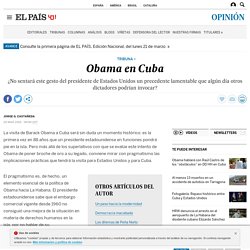 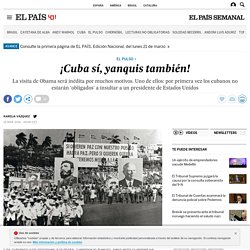 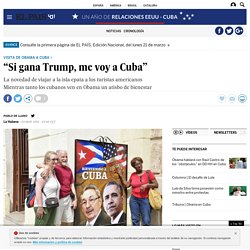 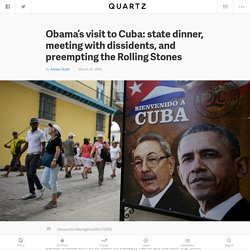 Researchers, led by Anna-Clara Hollander, from Sweden’s Karolinska Institute, studied 1.3 million people living in Sweden and found that refugees were three times more likely to experience schizophrenia and other psychoses than native-born Swedes, and two-thirds more likely than non-refugee migrants who came from the same region. The study, published in BMJ on March 15, did not look at the most recent refugees, but tracked more than a million people born from 1984 onwards, from their 14th birthday (or date of arrival in Sweden, if later), until the end of 2011. Some 3,704 of the group developed psychotic disorders. And in general, Kirkbride says that both environment and genetics have a role in developing psychosis. 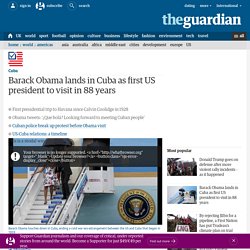 As he arrived, Obama used a Cuban phrase meaning “what’s up?” When he tweeted: “¿Que bolá Cuba? Just touched down here, looking forward to meeting and hearing directly from the Cuban people.” “This is a historic visit,” Obama said as he greeted US Embassy staff and their families at a Havana hotel. “It’s an historic opportunity to engage with the Cuban people.” Zika virus warning accompanies Obama to Cuba. President Obama's historic trip to Cuba on Sunday was accompanied by a warning from U.S. health officials that the mosquito-borne Zika virus linked to birth defects has spread to the island nation. 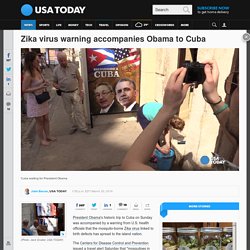 The Centers for Disease Control and Prevention issued a travel alert Saturday that "mosquitoes in the area are infected with Zika virus and are spreading it to people. " The "level 2" travel alert that calls for enhanced precautions, although the CDC recommends that pregnant women not travel to Cuba at all. Precautions include avoiding mosquito bites by using repellent and wearing long sleeves and other clothes to protect the skin.

Sexual transmission of Zika virus from a male partner is also possible, so travelers are encouraged to use condoms or not have sex. 'The oppression is high': Cuban police break up protest ahead of Obama's visit. Cuban police forcibly broke up a pro-democracy demonstration and arrested several dozen activists on Sunday, just hours before Barack Obama was to arrive in Havana to become the first US president to visit Cuba in almost 90 years. 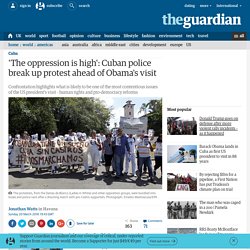 The protesters, from the Damas de Blanco (Ladies in White) and other opposition groups, were bundled into buses and police vans after a shouting match with pro-Castro supporters during their usual weekly demonstration near the Santa Rita church. “My son and his wife are in jail now. They all are. The police were very violent,” Glavys Fernández, the mother of leading opposition figure Antonio Rodiles, told the Guardian. “It’s the same every week. Earlier in the day, her son, who helped form the Todos Marchamos (“We all march”) campaign, predicted what was to come as he addressed journalists before the protest.

“I have been arrested more than 50 times in the past year,” Rodiles said. Obama hopes arrival in Cuba will usher in change. President Obama visits Cuba.