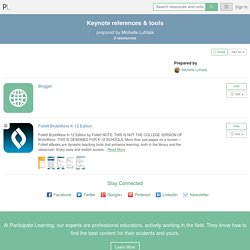 THIS IS DESIGNED FOR K-12 SCHOOLS. More than just pages on a screen – Follett eBooks are dynamic teaching tools that enhance learning, both in the library and the classroom. Enjoy easy and instant access... Participate Learning - Keynote references & tools. New Canaan High School library website, New Canaan, CT USA. Libraries Without Walls - Google Slides. Research and the CCSS.pdf. 11th-Graders Will Avoid Controversial Smarter Balanced Test. HARTFORD — The state's 11th-graders will be taking the SAT instead of the controversial Smarter Balanced Assessment test starting in the coming school year, Gov. 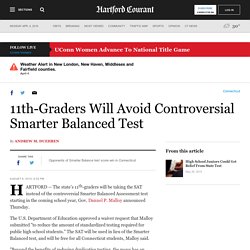 Dannel P. Malloy announced Thursday. The U.S. Department of Education approved a waiver request that Malloy submitted "to reduce the amount of standardized testing required for public high school students. " The SAT will be used in lieu of the Smarter Balanced test, and will be free for all Connecticut students, Malloy said. "Beyond the benefits of reducing duplicative testing, the move has an added benefit of leveling the playing field by ensuring those who otherwise might not be able to afford the SAT — the costs for which typically run more than $50 — will not be precluded from taking the exam, which is often requisite for admission to higher education institutions," the governor said in a statement. Flow Chart Maker & Online Diagram Software. 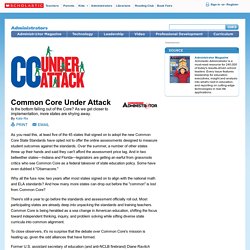 Over the summer, a number of other states threw up their hands and said they can't afford the assessment price tag. And in two bellwether states—Indiana and Florida—­legislators are getting an earful from grassroots critics who see Common Core as a federal takeover of state education policy. Some have even dubbed it "Obamacore. " Why all the fuss now, two years after most states signed on to align with the national math and ELA standards? And how many more states can drop out before the "common" is lost from Common Core? There's still a year to go before the standards and assessment officially roll out. To close observers, it's no surprise that the debate over Common Core's mission is heating up, given the odd alliances that have formed. For some, it may be too late. Financial Woes Plague Common-Core Rollout. School Library. Effective school library programs and professionally trained teacher librarians play an essential role in the instructional program of each school and student achievement. 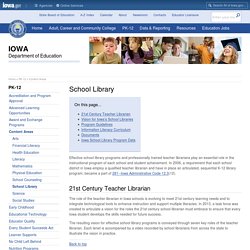 In 2006, a requirement that each school district in Iowa employ a qualified teacher librarian and have in place an articulated, sequential K-12 library program, became a part of 281--Iowa Administrative Code 12.3(12). 21st Century Teacher Librarian The role of the teacher librarian in Iowa schools is evolving to meet 21st century learning needs and to integrate technological tools to enhance instruction and support multiple literacies. In 2013, a task force was created to articulate a vision for the roles the 21st century school librarian must embrace to ensure that every Iowa student develops the skills needed for future success.

Highly Effective School Library Program. The focus of the Highly Effective Schools Through Libraries is two-fold: To provide guidance for K-12 educators as they facilitate student achievement and preparation for 21st century success, and, To recognize outstanding school library programs and librarians. 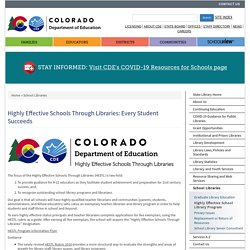 Our goal is that all schools will have highly-qualified teacher librarians and communities (parents, students, administrators, and fellow educators) who value an exemplary teacher-librarian and library program to facilitate student achievement in the 21st century. To earn highly effective status principals and teacher librarians complete applications for five exemplars, using the rubric as a guide. Transform Your School Library. School Libraries Transform Learning. This digital magazine produced by AASL in partnership with American Libraries, is designed to be shared with parents, colleagues, administration, and policymakers. 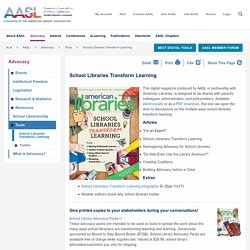 Available electronically or as a PDF download, this tool can open the door to discussions on the multiple ways school libraries transform learning. Articles. AASL Infographic FINAL.