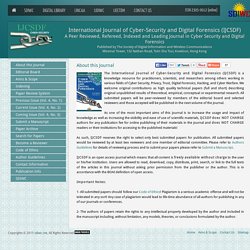 Cyber Security and Information Systems Information Analysis Center. Journal of Cybersecurity. Armitage - Cyber Attack Management for Metasploit. ARM To Integrate PolarSSL Crypto Into mbed OS-Powered IoT Devices. Today, ARM announced that it acquired the Dutch security software company Offspark, which is the main developer behind the PolarSSL crypto library for encrypted SSL connections on the web and on IoT devices. 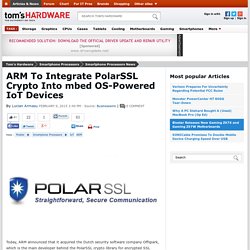 According to ARM, the PolarSSL library is already "pervasive" in the IoT world, which is exactly why the company thought Offspark is a good match for it. ARM is getting ready to launch its mbed OS for IoT devices later this year. Security on IoT devices could become a huge issue in the future if not tackled from the beginning with good security designs and protocols. ARM has already invested in the developing of the Thread mesh networking protocol for IoT, which should secure connections among devices at home. Now ARM wants to secure the Internet connections to the mbed OS-powered IoT devices, as well. Complexity is the Enemy of Security. We’ve likely all heard the phrase “complexity is the enemy of security” many times. 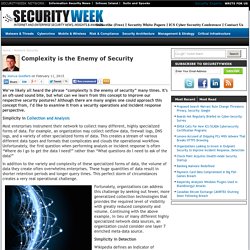 It’s an oft-used sound bite, but what can we learn from this concept to improve our respective security postures? Although there are many angles one could approach this concept from, I’d like to examine it from a security operations and incident response perspective. Simplicity in Collection and Analysis. Enterprise Mobility: COPE vs. BYOD. Corporate-owned device fleets have been the norm since mobile was introduced into the enterprise. 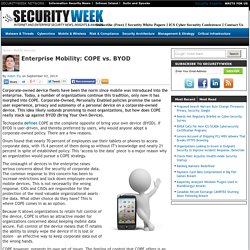 Today, a number of organizations continue this tradition, only now it has morphed into COPE. Corporate-Owned, Personally Enabled policies promise the same user experience, privacy and autonomy of a personal device on a corporate-owned device. Netgear router issues could allow auth bypass, info disclosure. Bits and bytes in intelligence: Umbrella from OpenDNS. In our other First Look this month we talk about the soft side of cyber intelligence. 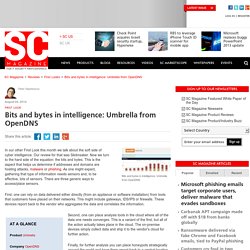 Our review for that was Silobreaker. Now we turn to the hard side of the equation: the bits and bytes. This is the aspect that helps us determine if addresses and domains are hosting attacks, malware or phishing. As one might expect, gathering that type of information needs sensors and, to be effective, lots of sensors.

There are three generic ways to access/place sensors. First, one can rely on data delivered either directly (from an appliance or software installation) from tools that customers have placed on their networks. Trojanized Android apps steal authentication tokens, put accounts at risk. April 10, 2014 The rogue apps can steal authentication tokens and risk the accounts of widely used services. 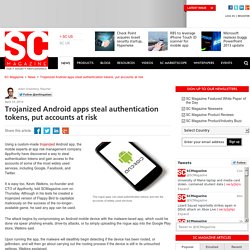 Using a custom-made trojanized Android app, the mobile experts at app risk management company Appthority have discovered a way to steal authentication tokens and gain access to the accounts of some of the most widely used services, including Google, Facebook, and Twitter. It is easy too, Kevin Watkins, co-founder and CTO of Appthority, told SCMagazine.com on Thursday. Although in his tests he created a trojanized version of Flappy Bird to capitalize maliciously on the success of the no-longer-available game, he said any app can be used. The attack begins by compromising an Android mobile device with the malware-laced app, which could be done via spear phishing emails, drive-by attacks, or by simply uploading the rogue app into the Google Play store, Watkins said. “The easiest way is to get physical access to the device and install [the rogue app] that way,” Watkins said. 5 Best Practices in Data Breach Incident Response. It goes without saying that all IT organizations should have an active Incident Response (IR) Plan in place – i.e. a policy that defines in specific terms what constitutes an information security incident, and provides a step-by-step process to follow when an incident occurs. 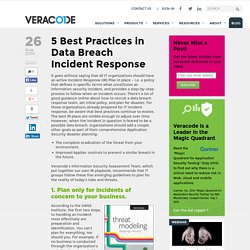 There’s a lot of good guidance online about how to recruit a data breach response team, set initial policy, and plan for disaster. For those organizations already prepared for IT incident response, be aware that best practices continue to evolve. 7 best practices for a successful incident response plan. An MIT professor once said there is zero correlation between intelligence and wisdom. 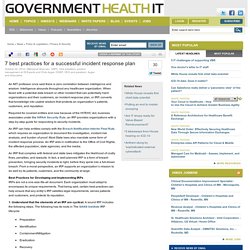 Intelligence abounds throughout any healthcare organization. Best Practices: Backup and Recovery Strategies. Why You Should Start Using a VPN (and How to Choose the Best One for Your Needs) Creepy: Next-gen Barbie doll listens in on your kids' conversations. Well, this is something that is kind of cool and utterly scary at the same time. 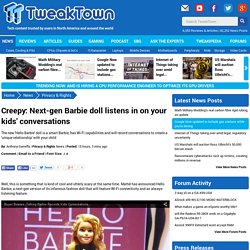 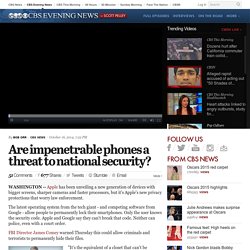