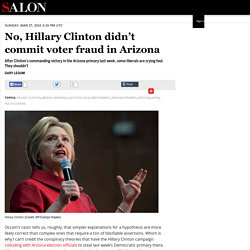 Which is why I can’t credit the conspiracy theories that have the Hillary Clinton campaign colluding with Arizona election officials to steal last week’s Democratic primary there. Why twist our brains into pretzels when the simple answer – “It’s Arizona” – is staring us right in the face? I don’t mean to be glib. Certainly many factors went into the clusterfuck that was the Arizona primary. The gutting of the Voting Rights Act by the Supreme Court, for one, meant that state officials could merrily make voting difficult for the poor and minority voters, who are always the ones getting screwed over by voter-suppression chicanery, without worrying that election monitors from the Justice Department would bring down the hammer ahead of time. 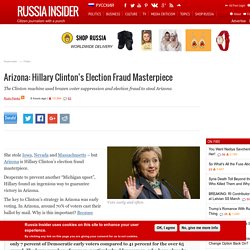 Desperate to prevent another “Michigan upset”, Hillary found an ingenious way to guarantee victory in Arizona. The key to Clinton’s strategy in Arizona was early voting. In Arizona, around 70% of voters cast their ballot by mail. Why is this important? Because of the 297,714 voters who have already cast their ballots—174,706 were female, 59 percent of the total early Democratic vote. In other words, the elderly (see: Clinton supporters) make up the vast majority of early voters in Arizona. Hillary's plan to steal Arizona was remarkably simple: Suppress voting on election day, and rely on her large lead with early voters to secure a win.

It was a perfectly executed heist. Drastically reduce the number of polling locations to make voting nearly impossible For starters, polling places were almost non-existent: Yeah, why would at least 30% of eligible voters feel the need to vote? 2. 3. Clinton Claims Victory but Arizona's Voting Fiasco Dubbed "National Disgrace"

Something was amiss in Arizona on Tuesday. 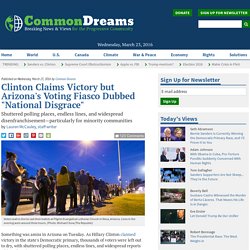 As Hillary Clinton claimed victory in the state's Democratic primary, thousands of voters were left out to dry, with shuttered polling places, endless lines, and widespread reports of disenfranchisement. In Maricopa County, which includes the capital Phoenix, voters waited up to five hours to cast a ballot after the County Elections Office slashed the number of polling sites from 200 in 2012 to just 60 this year. As the state's most populous county, this amounted to more than 20,000 voters for every available polling location. Notably, many Latino areas were left with either just one or no polling places. Maricopa County Recorder Helen Purcell defended that decision, saying, "we looked at an area, and factored into that how many early ballots we usually get in that area and how many people normally vote at the polls. Bernie Sanders' campaign manager, Jeff Weaver, expressed frustration over the early call.

There were other issues too. What happened in Arizona wasn’t an accident: When states make voting impossible, it’s for a very clear reason. Once again, an American election was unnecessarily thwarted by long lines and not enough ballots. 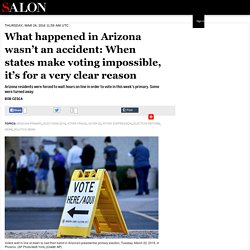 To say there’s no excuse for such nonsense, especially in a nation that prides itself on its representative democracy and, yes, its exceptionalism, is understating the problem. This time around, it happened during the Arizona primary where countless voters were forced to stand in lines for hours, while others were told they weren’t registered in the first place. In Maricopa County alone, election officials infuriatingly reduced the number of polling places by 70 percent. Such a drastic reduction meant there was only one polling place per 21,000 residents of the highly populated Phoenix metroplex. Officials including County Recorder Helen Purcell (a Republican) said the cutbacks were due to budgetary concerns. It’s yet another example of why the federal government should take over the election process. Thirty-three states boast one form of voter ID or another. The GOP excuse for these laws?