National Climate Assessment: 21st Century Precipitation Scenarios. EarthID: 4028 These visualizations show model projections of the precipitation anomaly from 2000 to 2100 as a percentage difference between the 30-year precipitation averages and the 1970-1999 average. 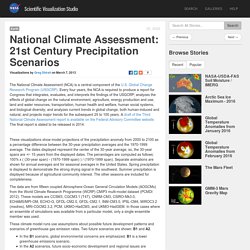 The dates displayed represent the center of the 30-year average; so, the 30-year spans are +/- 15 years from the displayed dates. Say goodbye to major cities if these scientists are right about Antarctica’s collapsing ice. This story was originally published by the Guardian and is reproduced here as part of the Climate Desk collaboration. 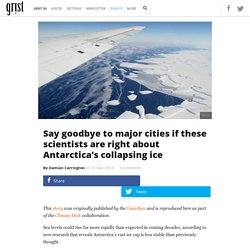 Sea levels could rise far more rapidly than expected in coming decades, according to new research that reveals Antarctica’s vast ice cap is less stable than previously thought. The U.N.’s climate science body had predicted up to a meter of sea-level rise this century — but it did not anticipate any significant contribution from Antarctica, where increasing snowfall was expected to keep the ice sheet in balance. 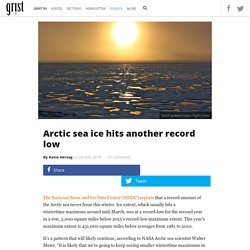 Ice extent, which usually hits a wintertime maximum around mid-March, was at a record-low for the second year in a row, 5,000 square miles below 2015’s record-low maximum extent. This year’s maximum extent is 431,000 square miles below averages from 1981 to 2010. Ensemble, nous pouvons refroidir la planète ! Postwaves - Climate Think Tank, Top Posts. Climate Change. The scientist who first warned of climate change says it’s much worse than we thought. The rewards of being right about climate change are bittersweet. 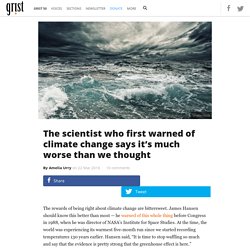 James Hansen should know this better than most — he warned of this whole thing before Congress in 1988, when he was director of NASA’s Institute for Space Studies. At the time, the world was experiencing its warmest five-month run since we started recording temperatures 130 years earlier. Hansen said, “It is time to stop waffling so much and say that the evidence is pretty strong that the greenhouse effect is here.” COP 21 : ratifier c'est bien, changer de politique, c'est mieux. A frightening record: Carbon dioxide levels show biggest-annual jump.

Recently, we’ve had more reason than usual to be optimistic on climate change — the world reached its first truly global climate agreement in December, there are a lot of signs that China is getting serious about its emissions, and coal is facing economic collapse in the U.S. 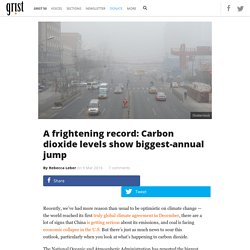 But there’s just as much news to sour this outlook, particularly when you look at what’s happening to carbon dioxide. The National Oceanic and Atmospheric Administration has reported the biggest 12-month jump in carbon dioxide concentrations since record-keeping began, based on preliminary data from its Earth Science Research Lab in Mauna Loa. From February 2015 to 2016, the global concentration of carbon in the atmosphere rose a record 3.76 parts per million (ppm), to over 404 ppm.